Another day meant another obstacle from mother nature at the 2017 International 49er and FX World Championship, where an unstable land breeze teased the gold medal fleets this morning for their 10 AM start. Both the men’s 49er and the women’s FX skiff started races in 6-10 knots of Easterly breeze, only to see the wind shut off completely as they headed to their respected finish lines.

Some of the 140 teams from 27 nations were jumpy with anticipation and all enjoyed the warm summer Portuguese sun as they waited on the water for the forecast Northerly to fill in, and after nearly 2 and a half hours, it filled quickly. 8 knots became 12 became 16 gusting near 20 knots, allowing the men’s 49er fleet to pick up four more races and complete their championship. The women’s FX fleet sailed two races before heading back to shore, and with the race deadline drifting close, officials sent the top ten teams out to the medal racing course – a tight, intense racetrack putting boathandling and boat-on-boat tactics at a premium for thousands of beachgoers just meters from the action and tens of thousands more watching online. 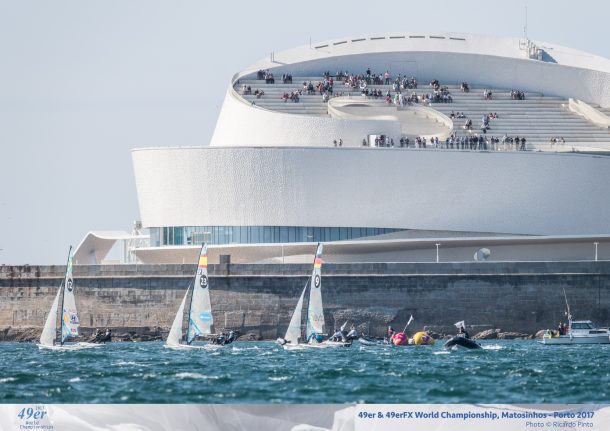 Spectators were treated to a full brawl between these top female athletes, with three teams from three different continets battling for the all-important podium spots and the title of 2017 World Champion. It was Rio 2016 all over again, and when leading Rio Bronze Medalists Jena Hansen and Katja Iversen (DEN) capsized with a huge lead during the penultimate race of the event, Rio Gold winners Martine Grael and Kahena Kunze pounced, taking a 2nd place with third place Alex Malone and Molly Meech (NZL, Rio Silver Medalists) took the win. “We actually let the mainsheet go at the top mark to be sure we wouldn’t have any problems, and a huge gust hit us at that moment and took us over,” said Hansen. “We got a little annoyed but it was not the end of the world, and we knew in the final race we just needed to be close to the Brazilians to take the win.” They’d pass Grael and Kunze anyway, and as they hoisted their Danish flag over their heads their boat capsized, the duo popping up quickly on the overturned boat, hugging and laughing. Hansen said her year off from 49er sailing was just what she and Iversen needed to win. “We rediscovered each other this week, and maybe the key to our week was our relaxed feeling. And now it’s on to the next thing!” Hansen will travel to Lisbon to meet with her Volvo Ocean crewmates aboard Vestas 11th Hour Racing next week. 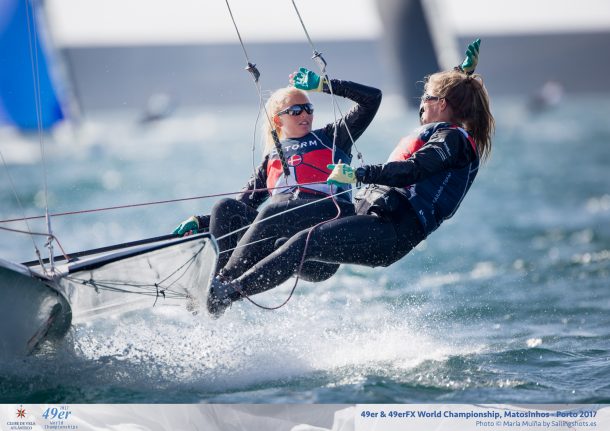 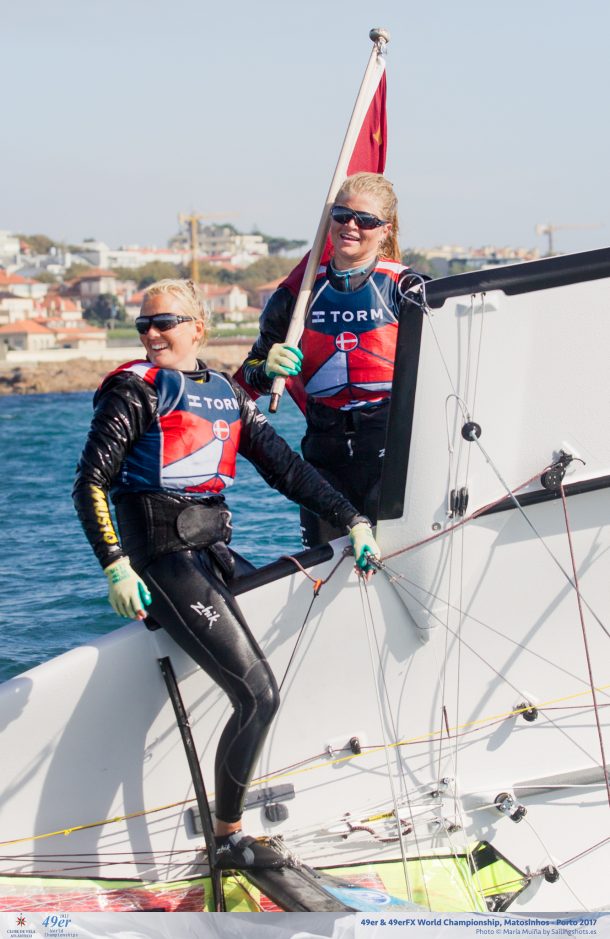 “It was exciting to be battling for the win against the other teams on the podium in Rio,” said Grael, who said she was extremely happy with their result. “It’s way beyond what we expected because of all the other things we’ve been involved with, and we came to this championship a bit unprepared.” She will also be heading to join a Volvo Ocean Race team in the coming weeks.

Kiwi duo Maloney/Meech couldn’t finish the regatta with the form they began with; despite a blistering performance in the earlier rounds and a lead through the first half of the championship, they were relegated to the bronze position.

The championship wrapped up with an award heavily featuring the volunteers who played a huge part in keeping the championship on track, followed by a party for all the sailors.

Reigning European 49er Champions Dylan Fletcher and Stu Bithell (GBR) had a smoother road than the Danish champs to their first-ever World Championship win, but training partners James Peters and Fynn Sterritt still had a mathematical chance to take them down going into the final race of the championship. “We knew we were guaranteed a silver going into the last race and the only way James and Finn could beat us was to win it with us getting 4th or worse,” said Fletcher, who stayed on top of Peters to the windward mark.  “We thought we’d done the job and the job was over, but we let them split from us and it was looking bad for a little while with us pretty far back,” he said.  As they’ve done in race after race the European champions battled right back, eyes glued to Peters and Sterritt on the other side of the course.  “We were a little nervous but it was a long way for them to get into the lead, and that’s how it ended.” 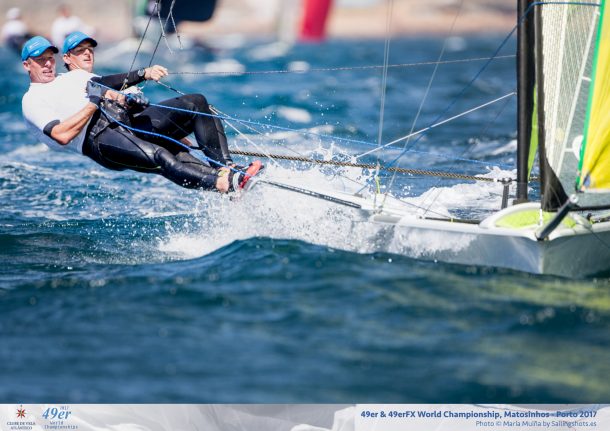 Peters/Sterritt would complete the front row lockout for the British Sailing Team by taking their first Worlds podium, with Austrian standouts Benjamin Bildstein and David Hussl finishing out the money spots and the 2017 Worlds. 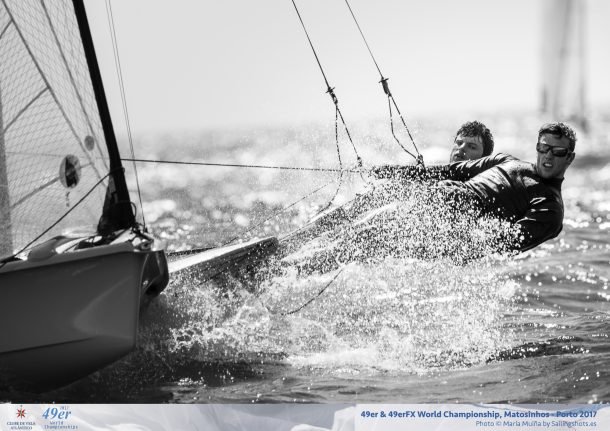 One secret spectator was especially interested in the results: Rio Gold Medalist, new America’s Cup champion wing trimmer, MAPFRE Volvo Ocean Race crew and 4-time World Champion crew Blair Tuke watched the finals from the water before joining the broadcast team in the studio to discuss the reasons for his trip to Porto.  “We’ve made it no secret that Pete and I love sailing the 49er, we’ll wait until the Volvo is over, see how the Cup shapes up, and we’d love to give the 49er fleet another crack,” said Tuke.  When commentators pressed him to commit to his return, he made it clear it was a priority, but stopped short of giving a date.  “It’ll be a year before the Volvo is finished, so we’ll have a chat then and figure out if we’re ready for the challenge of the 49er again,” he said.

More centralized information including results, articles and other regatta documentation is available on the Class website at http://49er.org.