Buenos Aires, Argentina. The final day of the 2015 49er and 49er FX World Championship. The beautiful venue of Club Nautico in San Isidro hosted the 6 day event without a hitch resulting in 16 fairly sailed races, one newly crowned FX champion, and one long time favorite 49er boat coming in for the win.

The 49er regatta was decided before the medal race even began with Burling and Tuke of New Zealand having already wrapped up their third straight 49er World Championship by a 30 point margin.  They came out to battle in the medal race and took the pin to get off to a good start, ever the gamers.

The real race was for the Silver medal, with four teams within striking distance of the Silver.  The journeymen Alsonso brothers struggled all day, but based on the strength from their amazing day 5 they were still sitting in 2nd position, three points clear of Nathan Outteridge and Iain Jensen of Australia.  Behind them were Heil & Ploessel of Germany and finally the Lange brothers.

The Lange Brothers followed Burling and Tuke off the pin end of the start line and headed for the left corner.  Being local sailors they were betting on their experience in these waters, but it did not pay off, as the right again paid heavily leaving them well behind the fleet.

The Aussies, Spanish, and Germans all headed right a number of back markers, with the Alonsos in the controlling position.  By the time they hit the corner, however, it was the Aussies who had sailed by far the best gold fleet out of anybody, and had the boat speed to get to the top mark in third overall.  A funny thing happened down the first run however, as the Aussies were rolled first by the Austrians and then by another Spanish team, Botin and Turrado.  The Aussies are rarely slow, so there was speculation of something being wrong as the Aussies rounded the leeward mark just ahead of the Alonso’s, and falling back. 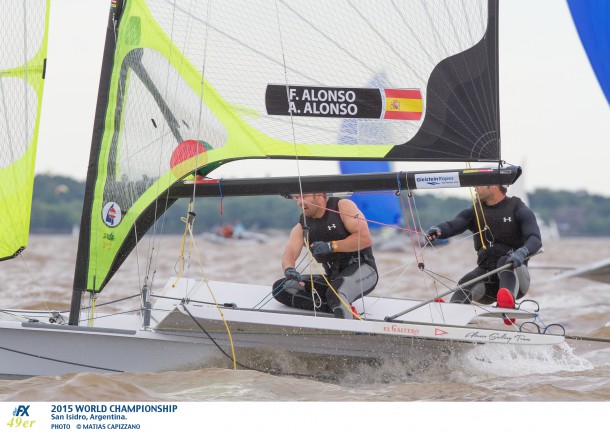 The Alonsos adopted a strategy of staying close to the Aussies, hoping they could keep the distance close and follow immediately behind them, to take the silver.  The strategy couldn’t hold, however, as the combination of good upwind speed for the Aussies  meant the gap widened.  On the final downwind, it was still all to play for.  Botin and Turrado were threatening the Aussies right to the finish and the Alonsos were just behind.

At the run to the finish it was neck and neck.  Nathan, cool as ever, had noticed that Dylan Fletcher and Alaign Sign of the British Sailing Team had passed the Alonso’s to put yet another boat between them and the Alonsos, so the Aussies took the Silver by three points, with the Alonsos striking bronze.

The kiwis should once again be the real story leaving Argentina, with an unprecedented 22nd Olympic class victories under their belts. This surely puts them into the top echelons of Olympic class dominance with the likes of Ainsley and Scheidt, who each had exceedingly long unbeaten streaks in the Finn and Laser respectively.  It’s never been done quite like this in the 49er before, with three years of uninterrupted dominance.  We can’t overlook the advancement of Outteridge, however, who overtook illness in crew Iain Jensen early in the week to post by far the best gold fleet and fantastic upwind boat speed for all of the final day.  It’s not a fair thing, but if Burling and Tuke don’t win in Rio, will the world recognize what they have done.

In any case, the rest of the 49er fleet has a few good chances to beat them in the run up to Rio, with major events every two month.  Next up are the 2016 World Championships in Clearwater, then the European Champoiship in Barcelona, and finally the South American Championship in Rio only 3 weeks before the games begin. 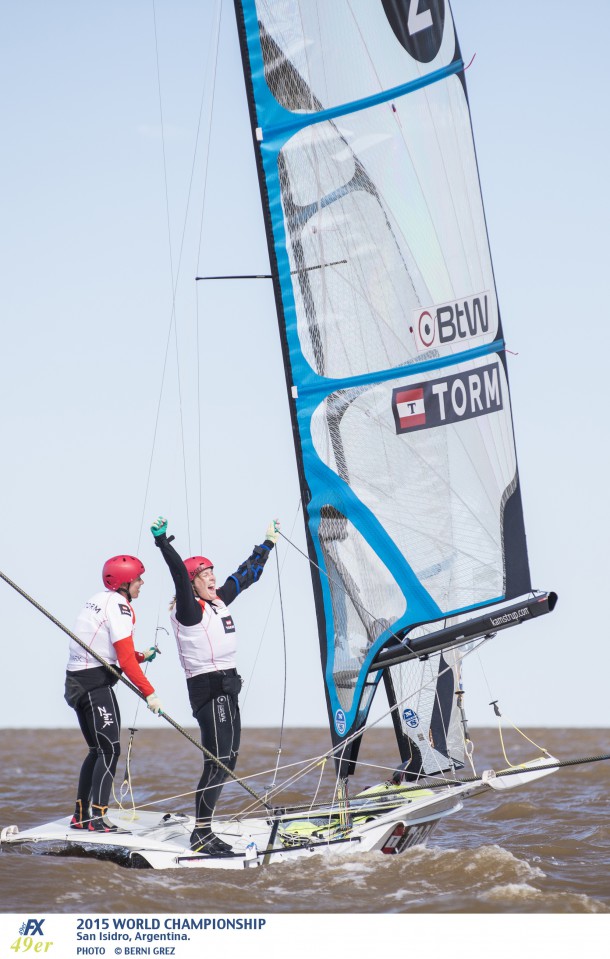 No single team managed to seize the moment and put a string of top results together resulting in the log jam at the top between 3 Danes, Brazilians, Italians, and British. Yesterday’s leading Danes, Ida Marie Baad Nielson and Marie Thusgaard  Olsen, fell from the lead to sixth after struggling mightily in their starts and being forced to claw back through each race today. With 6 teams within 13 points of the victory, racing came down to the wire.

With the right side of the course favored the whole fleet started on port and drag raced to the right course.  Ida and Marie (Danes), the Brazilians, the Italians and the Spanish.  Jena and Katja (Danes) were forced to tack early and headed to the left, which was the last the fleet would see of them as the right side was greatly favored. 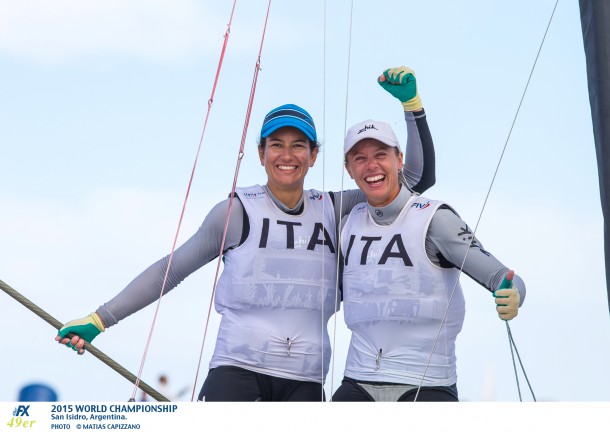 The bronze medal was still up for grabs, and Ida and Marie sat after the finish unsure of their placing.  Finally, after a day that must have been very difficult and already full of come back, they approached the committee boat to see if they’d taken a medal.  Smiles burst over their faces as they realized they had secured the bronze, only one point ahead of their team makes Hansen and Iversen.

Following up in fifth pace were Dobson and Ainsworth of the British Sailing Team.  Fifth is their best placing at a regatta since Ainsworth has returned from injury.

The 49er Class would like to thank the members of Club Nautico for hosting and the province of San Isidro for providing a welcoming stay!