Day 6  of the 2015 World Championships in Buenos Aires, Argentina.

In the 49er fleet, fellow leaders Peter Burling and Blair Tuke also struggled somewhat posting a 13th, 8th, and 8th, but with the Alonso brothers falling back they secured their 3rd straight 49er World Championship and 23rd straight 49er victory!  Climbing up the leaderboard, as they have all of gold fleet are 2012 Olympic Champions Nathan Outteridge and Ian Jensen.  Their run today of a 2nd, 1st, 4th vaulted them into third overall only 3 points back of the second place Alonso’s.  Also having a solid day so far are Erik Heil and Thomas Ploessel of Germany, who are only 2 points behind the Aussies and can potentially move up to the Silver medal spot.

The end of Gold fleet also secures six teams Olympic qualification, three from 49er and three from 49erFX.  The 49er countries of Poland, Germany, and Argentina are all in the top 7 overall, exactly where they started the week and never seemed in doubt of losing the positions they coveted so greatly.

Heil & Ploessel from Germany are looking to cap a stand out week that now includes nation qualification and are hoping to maximize the number of selection points they can earn within the German qualification system.  For the Polish, the qualification is significant, as any miss step would be a huge blow for a nation that has invested heavily in 49er sailing recently and for the most part has delivered excellent results in the previous 18 months. The Polish team of Lukasz Przybytek and Pawel Kolodsinski who’ve qualified their country noted, “We felt our starts were strong, but we made some bad decisions, but overall we are in the medal race and we are happy.”  Which ever team qualifies from Poland they will surely be looking to step onto the podium in Rio. 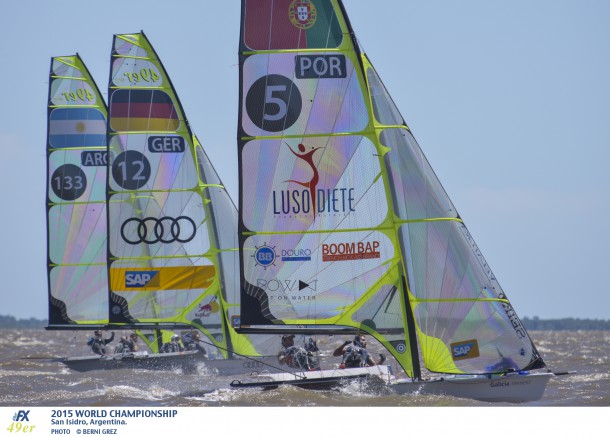 The final team to qualify are the local Lange brothers, whose home club hosted the event.  The youngsters are following in their fathers footsteps on the Oympic path, and they too will be looking for medals in Rio. A very emotional pair were the two as they wheeled their boat into the boat park and immediately hugged their legendary father. Tears of joy flooded their faces as Yago Lange emotionally commented,

“It’s been a dream of for us; we’ve been dreaming about this for ages. I’ve cried many times watching my father get a medal there, and it’s a long way, but I think we are closer to there [the olympics]. Doing what we like, and doing it with my brother and with my whole family there and the town, it’s amazing.”

The Croatian team finishes as the 4th country, and will likely earn their berth in two weeks’ time assuming no Oceania teams attend the Oceania country qualifiers at Sailing World Cup Melbourne.

Six 49erFX teams remain in the hunt to win the 2015 49er and 49erFX World Championship with only the medal race remaining.  No single team managed to seize the moment and put a string of top results together resulting in the log jam at the top between 3 Danes, Brazilians, Italians, and British. Yesterday’s leading Danes, Ida Marie Baad Nielson and Marie Thusgaard  Olsen, fell from the lead to sixth after struggling mightily in their starts and being forced to claw back through each race today.

In the 49erFX  the picture was very murky heading into the final day to decide which team would earn the spots and it remained so through to the final race.  With the breeze up, some questioned whether Argentinians Vicky Travascio and Sol Branz would falter, but they held wits and sailed the best day of anyone to secure the top country place. When asked how does it feel to not only qualify your country for Rio, but to also do it while in Argentina, a very cheerful Sol Bronz said, “It feels awesome, like we had a whole group of people cheering on us on the finish line, so it was amazing…I’m just going to rest at home for two weeks and embrace it!” 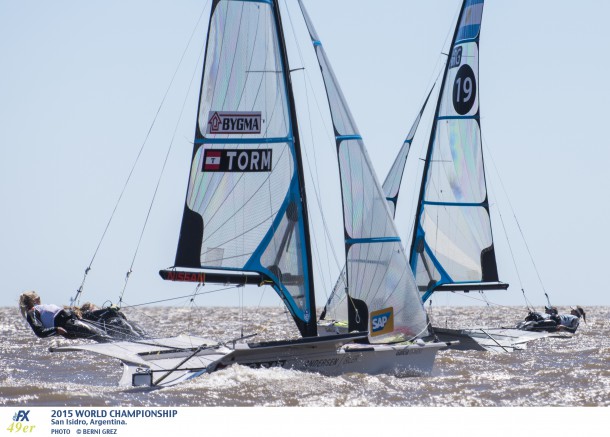 Just behind them are Singapore’s Griselda Khng and Sara Tan. The Singapore squad has a number of talented sailors moving into the FX fleet and Griselda was extremely pleased to secure a spot mentioning, “It feels really good. It’s been our main objective since last year to qualify here. Many mistakes were made, but many lessons learned as well, so we’ll keep building everything up and hopefully prepare ourselves for the games.”

The final guaranteed spot in the 49erFX came down to the protest room, in a protest between Ireland and Canada.  The Irish crew were sitting in the third country position with the Canadians tied for 4th country position with the Norwegians.  Canada protested the Irish for an incident in the first race of the day and won, leaving the Irish crew disqualified.  Canada moved up to third country, claiming the guaranteed spot while the Irish move down to fifth in a tie with the United states.  Norway and Ireland will now be watching continental qualifiers to see if there are vacancies, which there are likely to be in both Oceania and Africa.

The breeze arrived and built to a challenging 16-20 knots forcing some teams into difficult situations and even a few capsizes. The medal races will round out the afternoon to finish off this 2015 49er & 49erFX World Championships.

Keep following all the action on all of our social media channels: @49ersailing, along with our live tracking and commentary of the final medal race: http://49erworlds2015.sapsailing.com/gwt/Home.html#/event/:eventId=83f5c615-fb20-4a60-9e6e-9560cf4fec0b