The scene has been set for the 49er, 49erFX and Nacra 17 Medal Races at Hempel World Cup Series Genoa following the conclusion of fleet racing in the Italian city.

The fifth day of competition in Genoa saw a long awaited 6-9 knot steady western breeze arrive, ensuring that 41 of 42 races were completed.

Italy’s Carlotta Omari and Matilda Distefano will lead the home nations hopes as they take a narrow advantage into the 49erFX Medal Race. Australian brothers David and Lachy Gilmour have New Zealand’s hottest sailing properties, Peter Burling and Blair Tuke, hot on their heels in the 49er and the advantage will be with Ben Saxton and Nicola Boniface (GBR) in the Nacra 17.

All Medal Races will be live on World Sailing’s YouTube Channel here – https://youtu.be/kyGGiRqiUdw.

Italy’s Omari and Distefano advanced into pole position in the 49erFX after finding near perfect form on the race track. From four gold fleet races the Italians secured a 3-2-1-2 scoreline.

Their consistent performance has given them a four point lead over Ida Marie Baad Nielsen and Marie Thusgaard Olsen (DEN) heading into Saturday’s Medal Race. Overnight leaders Odile van Aanholt and Marieke Jongens (NED) dropped to third, eight points off the leaders after a mixed day.

In the hunt for selection for Tokyo 2020 at the first of two Dutch qualification events, van Aanholt and Jongens are seven places clear of compatriots Annemiek Bekkering and Annette Duetz with just the Medal Race remaining.

Australia’s Gilmour brothers moved up to first overall after four gold fleet races in the 49er but the biggest movers were New Zealand Olympic champions and America’s Cup winners Burling and Tuke.

Burling and Tuke sailed their way to a 2-9-5-(22) scoreline which pushed them from tenth up into second and six points off the Australian leaders. Six years ago, Burling and Tuke had nobody to sail with in home waters, and teamed up with Outteridge and Jensen (AUS) and the rest of the Aussie squad.

The New Zealand fleet has really turned things around since then, with four kiwi boats in the top 17, including both 2nd and 4th. Add to that Leo Takahashi who sails for Japan but trains locally with the fleet in 28th place and it’s got to be the worlds leading squad now.

The points are tight across the board and as many as seven teams have a realistic chance of claiming a podium spot in Saturday’s 49er Medal Race.

Four blue and four yellow fleet races brought fleet racing to a close in the Nacra 17 and Great Britain’s Saxton and Boniface will take a seven point lead into the Medal Race.

Saxton and Boniface picked up a (6)-1-4-3 in the yellow fleet and have some daylight over Iker Martinez and Olga Maslivets (ESP) who secured a (16)-1-3-6 in the blue fleet.

Thomas Zajac and Barbara Matz (AUT) sit third, three points off the Spaniards. Two Italian teams, Lorenzo Bressani and Cecilia Zorzi and 2018 World Champions Ruggero Tita and Caterina Banti are fourth and fifth. They are firmly in contention for a medal.

Medal Races are scheduled to start at 10:00 local time on Saturday 20 April for the 49er, 49erFX and Nacra 17. The remaining fleets will continue fleet racing ahead of their Medal Races on Sunday 21 April. 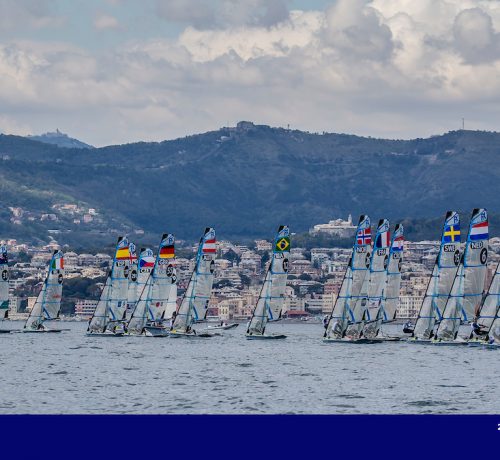 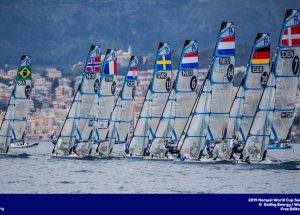 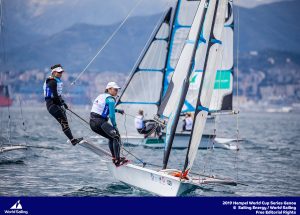