Dylan Fletcher and Stuart Bithell become the first British team to win 49er gold, and in the process knock Peter Burling and Blair Tuke (NZL) from their perch atop the sailing world.

The medal race was a tense and intense race from start to finish, with all of the protagonist teams sailing well and going head to head for the medals. As the race progressed the Kiwi leaders heading into the race were no longer in control of their fate. They watched from third place as it came down to whether the British pair could overtake Eric Heil and Thomas Ploessel (GER) to put a boat between themselves and the New Zealanders.

In a finish line cross that came after a few minutes of tense downwind sailing where every meter mattered, both boats gybe surged for the line and the British edged the Germans by less than the length of a spinnaker pole to win the Gold medals.

Elation came over the British team as they exploded in a combination of elation and shock. After a race where we overheard the British speaking openly, clearly, and in control, the emotions and the moment came through clearly as they achieved a lifetime dream. “I can’t believe it, I can’t believe it,’ was something Dylan Fletcher kept repeating, before sharing with Stu he had a dream where the medal around his neck was golden, now it is.

For Peter Burling and Blair Tuke their reaction was stoic and they politely took congratulations, but it was clear the disappointment on their faces showed they had not achieved what they set out to do. The most ambitious team in terms of the breadth and height of their achievements, being unable to defend their gold medals is a setback they will not soon be able to recover from.

Six teams, NZL, GBR, ESP, GER, DEN, POR were mathematically in the hunt for gold as the medal race started. Each was sailing well up the first beat making for an absorbing competition.

The start, like many medal races, was a fluid affair with plenty of space. The Spanish, British and Kiwis each changing position within the final 45 seconds. Each team got off the line well, with the British winning the pin end to go left and the Kiwis and Spanish each performing a nice port tack option start to head right. The Portuguese were over early and would get pulled from the race while, ending their day, while the other five teams found lanes and worked the beat.

As the British continued left, the Kiwis seemed to have better pressure on the right and managed to pinch off the Spanish team of Diego Botin and Iago Marra. Again and again, the cameras went back and forth between the British and Kiwi teams on opposite sides of the course, and each time it seemed like the Kiwis were powered up and the British were a little underpowered. As all five boats worked the beat, the Polish and Austrians were right in the mix too, making for a very challenging beat for all teams. The Dutch and Croatians were a bit farther back as those teams returned to restart in case they were over early. Seven teams were looking for every advantage to get out front.

As the fleet converged at the top mark, it was initially looking like the British would struggle, but over a sixty-second timeframe, they narrowly ducked Jonas Warrer with Jakob Jensen (DEN) and Lukasz Przybyetk with Pawel Kolodzinski (POL), but crossed NZL. Crucially, the British managed to tack just ahead of the Germans, who were leading on the starboard layline. The British and Germans got around the windward mark cleanly before the other four boats got to the windward mark at the same time. The Kiwis managed very well to sail around the small group held up by the Danish who hit the windward mark as they looked to shoot around it.

From that madness at the windward mark, the race settled down as the racecourse was quite open with only seven boats on a whole downwind instead of 25, like in normal racing. The three leading boats, the British, Germans, and Kiwis, each straight set and then about 60 percent of the way to layline the Germans gybed and headed across the course in clear water. The British continued onward to 90 percent of the way to layline, and then the Kiwis sailed even farther than the British. In a sign of what would come, the German and British spent the remainder of the run seeking out every meter they could gain.

The British ended up choosing to sail a very low mode, and soaked down to the leeward marks from a long way out. That brought the front group very close together, with the Germans able to gybe around the go right mark virtually at the same time the British went around the go left mark, followed tightly by the defending champions Burling and Tuke.

The teams did not give themselves as much separation as they did on the first beat, and the Germans, British and Kiwis were somewhat locked together up the whole beat. Early on, the British had to duck the Germans, and at one point they tacked directly on Burling and Tuke, forcing them right as they followed the Germans left. Somewhat uncharacteristically, the Kiwis tacked back shortly after to follow the British and Germans left. Looking back, it’s not clear why, as the chasing boat, the Kiwis were so keen to keep following the boats ahead. It was the closest they would get to the lead pair for the rest of the race.

The Germans, who are the defending Bronze medalists from Rio, held their lead. With the Germans ahead of the British, gold would go to Burling and Tuke (NZL). Fletcher and Bithell (GBR) needed to make the pass in order to leapfrog the champs.

The onboard audio from Fletcher and Bithell enabled us to overhear some of the tactics they would use to eek out every meter they could to overtake the Germans. Just before the windward marks, it became clear the Germans would be ahead of the British. The Brits went into a high mode with the Germans on their windward hip, to alter the geometry of who would get to the layline first and avoid the possibility of the Germans being able to tack on their wind for the remainder of the layline. They were able to tack simultaneously with the Germans and follow them closely into the windward mark.

The Germans and British rounded only two boat lengths apart, and then the Kiwis were another five boatlengths behind that. They each straight set, and just like the first downwind, the Germans gybed about halfway to the layline, and the like the first downwind, the British continued onward. This time they went all the way to layline, and with the rest of the pack outside of the battle, it became clear that the only way Fletcher and Bithell could win was to overtake the Germans.

Onboard again with the British, we could hear them discuss when to gybe and found a great wave to go on surging through their gybe and using wave to propel them downwind while their sails were changed over, and doing the maneuver beautifully.

The rest of the downwind was a light air drag race with the British and Germans seeking every advantage they could. The GPS tracker showed the lead flicking between the two boats as they each surged forward. As the finish line approached, it was clear the advantage might come down to the Germans being on Starboard tack, while the British were on Port. The Brits moved to a lower mode to delay the cross as much as they could, and were setting up to gybe on the Germans just before the finish.

As the British began to gybe, we could overhear Fletcher call ‘hold’ as the Germans also began their gybe meaning there was more room between the two boats. The British held momentarily and then continued their gybe through the finish line. Both boats were dead downwind for an agonizing moment before it became clear the British lead through the line by less than the length of the bow sprit.

That small advantage was all it took to secure a boat between the British and the Kiwis, who followed through in third place.

“Pete and Blair are maybe the best team in the world, it has been great to race them and win here,” said Bithell, a 470 silver medallist from London 2012.

Fletcher was delighted that IOC president Thomas Bach had visited the sailing venue on such a dramatic day, “I think it was really good sailing today. It showcased what’s great about our sport. I hope everyone back home enjoyed it. All the way round the course I was telling the boat, come on girl, you can do it.” The boat is called Kate, by the way, named after the Duchess of Cambridge.

For the Germans, the tension was not yet over, as they had to await the finish from the rest of the fleet to find out their fate. They needed to make up four boats on the Spanish to secure the Bronze medal.

The Spanish, who got themselves all mixed around up the second beat and down the last run, ended up finishing in seventh, which left them tied on points with the Germans. The tie goes to the team’s best placed in the medal race, leaving Eric Heil and Thomas Ploessel (GER) their second consecutive Bronze medal. For team Spain, it was heartbreak all over again, as Diego Botin with Iago Marra (ESP) joined their FX teammates in fourth place overall.

For all the photos, full results, and stories, go to the 49er Olympic page. 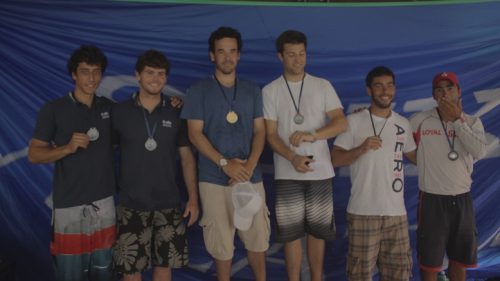 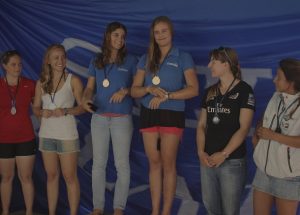 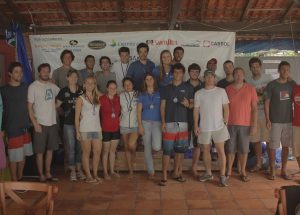