Day five was another good ‘Bay Day’ for the 49er and 49erFX fleets before it turned a bit lighter and less predictable for the Nacra 17s in the late afternoon.

With one day remaining at the 49er and FX World Championship the Dutch are in a position to repeat a World Championship victory in both events. Bart Lambriex with Floris van der Werken in the 49er sailed a 1, 5, 8 in the gold fleet to extend out to a 24-point lead. Meanwhile, competing on the beach course, Odile van Aanholt with Annette Duetz sailed a 2, 1, 3 in the FX fleet to overtake the Swedish pair Vilma Bobeck and Rebecca Netzler, and have an 11-point lead.

Neither lead is safe as racing concludes on September 5 with a single fleet race at 10:00 am local time in Nova Scotia followed by a medal race for each fleet at 14:00.

The sleepers in the 49er must be the Fantela brothers from Croatia who have just enough opportunity with a fleet and medal race to knock the Dutch from their perch.

Launching into the top three in race 12, the brothers were on perfect form until seaweed sent them back to 21st. They followed that with a 3,1, adding to their march towards the top of the fleet that followed a slow start to the championship, where only the Dutch held there nerve with consistent top finishes.

Take a look at the Dutch path to success in the Day 5 broadcast replay.

Lambriex & van der Werken, and van Aanholt all won gold at the 49er and 49erFX Worlds respectively in Oman last year. Only Annette Duetz was not present, resting from her silver medal performance in Tokyo. However, if Duetz does manage to secure the win with van Aanholt, she would become the only woman to win three FX World Championships.

None of these sailors will rest easy, as the conditions for tomorrow are forecast to be offshore and shifty, a challenging condition that really opens up the possibility of winning – and losing – to a much bigger part of the fleet.

Tita and Banti (ITA) continued their assault on the regatta, winning the first two races and finishing second in the final race; they have mathematically secured the gold medal with two races remaining. The rules dictate they must attempt to participate in the medal race to secure their title, but that is merely a formality. They have now won 13 of the 15 races in as dominant a display of Olympic class racing that anyone can be remember.

This is their second World title to go with their win in 2018, along with their Olympic gold medal at Tokyo 2020.

Tokyo silver medallists John Gimson and Anna Burnet (GBR) put in their best day so far and crawl up the leaderboard into the bronze medal position.

“The last few days we are happy coming back from quite a bad first part of the regatta,” said Gimson. Even on the eve of on final fleet race, he is keeping this worlds in perspective. “At this time in the cycle, it’s not a bad place to be . We’re in the mix.”

The pair were really ambitious after the Olympics aiming to jump one place higher on the podium, but have been caught flat-footed by the shift to full foiling and now find themselves in catch-up mode in breezier conditions.

Day 5 brought a declining sea breeze, with winds declining from 14 knots at the start of the session to just 6 knots at the finish. The British couple were solid all day with a 4, 2, 3 and overtook Kurtbay and Keskinen (FIN) for third overall.

Gigi Ugolini and Maria Guibilei (ITA) faltered slightly in the declining winds so could be caught by the Brits and Finns, although the young Italians still head into the final day with a 13-point advantage. If they hold onto the silver medal, it would be their second straight World Championship silver after winning three straight Junior World Championships in the Nacra 17.

Racing concludes on September 5 with a single fleet race at 10:00 am local time in Nova Scotia followed by a medal race for each fleet at 14:00.

Sena Takano (JPN) is already a veteran 49erFX sailor and competed in Rio 2016 at the age of 18, and then on home waters at Tokyo 2020, although we feel like we hardly know her. For the first few years of her international sailing career, there was a language barrier that couldn’t be breached, but through Covid times, Takano has learned English and speaks fluently now. She’s so much fun we grabbed an interview which we’re sure you’ll enjoy.

Racing at the World Championship runs from August 31 – September 5, 2022 and is best accessed via the website: https://49er.org/event/2022-world-championship/

Daily tracking, results, photos, highlights, and articles will be available from the website. Additionally, Days 3 through 6 (Sept 2-5) will have live broadcast coverage via the CBC Sports App, youtube.com/49ersailing and fb.com/49ersailing.

Here are the daily links: 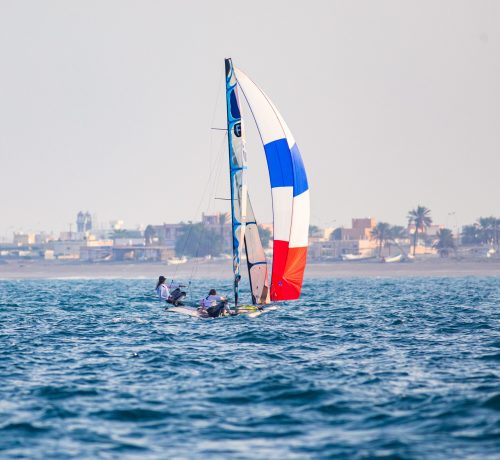 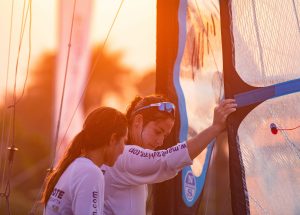 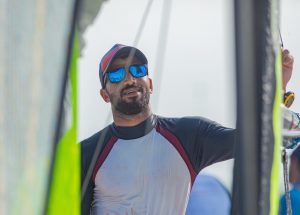