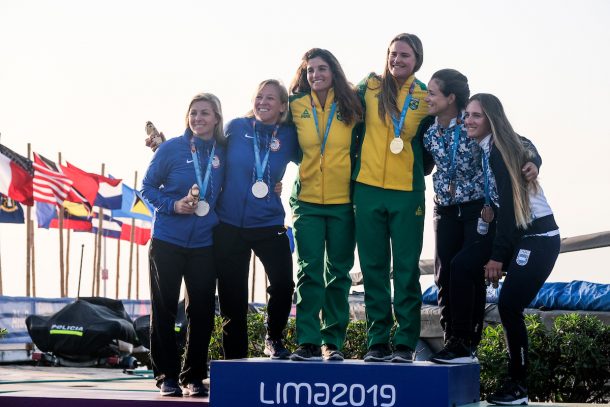 Logan Dunning Beck and Oscar Gunn and have won gold in Kiel Week after one of the tightest medal races ever seen in Olympic competition.

Logan Dunning Beck and Oscar Gunn have won 49er gold at Kiel Week after finishing second in a very tight medal race. The conditions, couldn’t have been better, with weather blowing in the teens and the air temperature up in the late 20s. The weather this week has been less like Kiel, more like California. The World ranked No.1 team from Great Britain won the 49er medal race, James Peters and Fynn Sterritt sailing well to win the bronze medal, just one point behind Lukas Przybytek and Pawel Kolodzinski of Poland who slipped from the overall lead but still holding on for a silver medal behind the Kiwis.

Those other Kiwis, Pete Burling and Blair Tuke, briefly moved into medal contention at the half way stage of the race when they charged into second place at the leeward gate. However, the shifting offshore breeze outfoxed the Olympic Champions who started the day in fifth, and finished the day in fifth.

In total, nine of the ten teams competing in the 49er Medal Race could have won the gold medal and it was one of the most exciting, uncertain races ever seen at Kieler Woche.

Some of the other Medal Race action was also very exciting. The Austrians celebrated wildly after winning the gold medal in the Nacra 17 catamaran. Thomas Zajac and Barbara Matz went into the Medal Race wearing the yellow jersey, but with the points very tight with three other crews from Italy, Denmark and Germany. The breeze was very favoured to the right-hand side of the course and Tara Pacheco and Florian Trittel recovered from a poor start to move into the lead by the final lap and cross the finish line first. Behind the Spanish, the battle for the medals was swinging first one way, then the other.

Early race leaders, Paul Kohlhoff and Alica Stuhlemmer, failed to protect the right side of the course and sailed into a wind hole on the left. Things went from bad to worse for the Germans when Stuhlemmer fell overboard, Kohlhoff forced to ease sails and wait for his crew to swim and catch up again before climbing on board. That put Germany out of medal contention.

Meanwhile Vittorio Bissaro and Maelle Frascari were making gradual progress through the fleet and managed to climb to the silver medal, with Denmark’s Lin Cenholt and CP Lübeck grabbing the bronze.

The 125th edition of Kiel Week has been a vintage regatta. It didn’t rain once during the nine days of competition, and some of the best sailors in the world came to do battle on the warm blue waters of the Kieler Fjord. In total, Kieler Woche has hosted more than 4,000 sailors from 60 nations, competing in more than 1,900 sailing boats.

For all resutls, photos, video and more check out the Kiel Regatta Page. 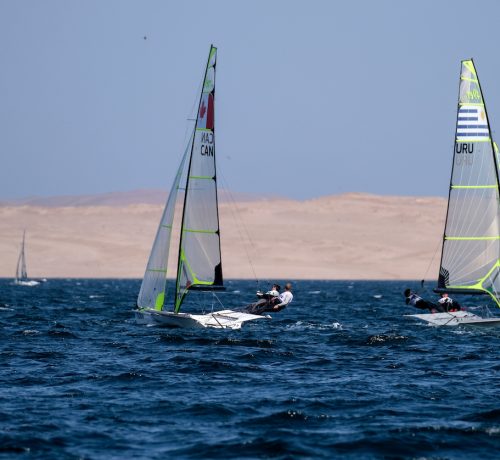 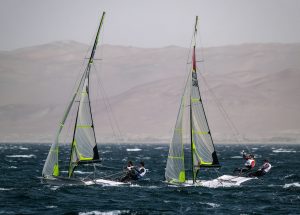 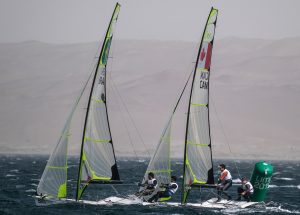