The 49er, 49erFX, and Nacra 17 will finish the 2018 Sailing world Series Hyeres on Saturday with medal racing live broadcast via youtube. The broadcast starts at XX local time and can be viewed from either of the 49er or Nacra 17 event pages. Each page contains all of the photos, videos, and results from the week so you can follow along.

Day 1 – A light start to racing

The opening scene at the third round of Sailing’s World Cup Series in Hyères, France saw the 647 sailors from 46 nations remain cautious as they laid down markers to build on for a full week of competition.

In a variable 6-11 knot easterly breeze, the competitors looked to achieve good finish positions that would put them in a strong place on the leaderboard for the latter part of the week.

The early races have set the scene and with a light wind forecast ahead, it’s going to be a mesmerising week of competition with all the competitors expecting more close racing.

Highlights from the opening day can be viewed here – https://youtu.be/uXEQHiSEqjc.

The 49er features 40 strong teams and Poland’s Dominik Buksak and Szymon Wierzbicki had the best of the day, recording a 3-(5)-1 scoreline. They are tied on four points at the top of the leaderboard with David Gilmour and Joel Turner (AUS).

“We started well and that was the key to winning today. Because the shifts weren’t very big, that allowed us to stay at the front from the beginning of the race,” explained Buksak on the secret to their consistent performance as those around them failed to do so.

“Our opponents were our biggest challenge,” continued Buksak. “We have some top sailors here and it’s a pleasure competing with them. Now that we are on the top, we will try our best to stay there and sail our best throughout the week.”

Although the Australians are tied with the Polish team, they picked up a 27th in the final race of the day, which they discard, meaning they’ll have to have a degree of caution for the rest of the week. “We started off pretty well in all our races,” said Gilmour, “but we found the wind to be quite tricky because weren’t sure of the wind speeds and shifts.

“In our last race, the wind speed just died, and it was tough competing in that. It was quite packed and highly competitive but that’s what makes World Sailing regattas different because you always get larger 49er fleets.”

Turner concluded, “Having a 40-boat fleet, it was tight racing and we couldn’t afford to make any mistakes.”

In the 49erFX, just two races were completed. Denmark’s Ida Marie Nielsen and Marie Thusgaard Olsen snapped up both race victories to open up an early five point lead over Norway’s Helene Naess and Marie Rønningen.

The single Nacra 17 race win went the way of Ben Saxton and Nicola Boniface (GBR). They were followed by Ruggero Tita and Caterina Marianna Banti (ITA) and Iker Martinez and Olga Masilvets (ESP). 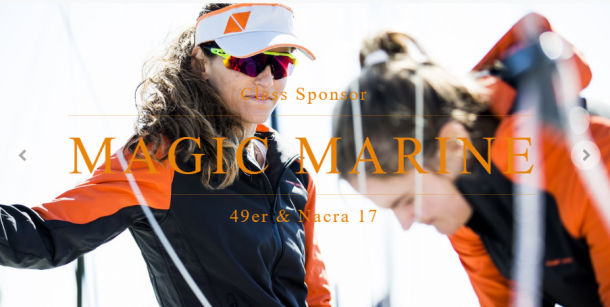 At 20:35 local time the last of the teams competing at the third round of Sailing’s World Cup Series in Hyères, France got back to the dock, marking the end of a long and challenging day.

A foggy morning with no wind became a sunny afternoon with a light 5-8 knot breeze that tested the sailors composure and patience with delays ashore and on the water.

Races were held across every fleet but only the RS:X competitors could complete their full schedule of races as the 49er competitors pulled down their sails under the glow of the marina lights to close the day.

Three challenging Nacra 17 races were held and Italy’s Ruggero Tita and Caterina Marianna Banti picked up a 1-(15)-4 scoreline to remove the early pacesetters, Ben Saxton and Nicola Boniface (GBR), from the top of the tree.

The Italians recently won gold at the Trofeo Princesa Sofia and finished third at the 2017 Nacra 17 World Championship.

They are lacking a World Cup medal but only have their eye on one colour, “We are here to win,” exclaimed Banti. “We have some of the best here, including Santi and Cecilia, and Jason and Lisa. I think the Spanish, Fernando Echávarri and Tara Pacheco are also strong contenders.

“We will try out best and do whatever it takes. Our plan is to just sail as fast as we can.”

Iker Martinez and Olga Masilvets (ESP) round up the podium with plenty of races ahead of the 30-boat fleet.

Helene Naess and Marie Rønningen (NOR) moved up to first overall in the 49erFX but New Zealand’s Alex Maloney and Molly Meech shone in the challenging conditions by picking up two race wins. The Kiwis are nine points off the leading Norwegians.

The day’s remaining race win went the way of Natasha Bryant and Annie Wilmot (AUS), 2016 Youth Sailing World Champions in the 29er, who are making only their second World Cup Series appearance.

Poland’s Dominik Buksak and Szymon Wierzbicki and Australia’s David Gilmour and Joel Turner continue to do battle in the 49er fleet. From two light wind races in a dying twilight breeze, the Polish team picked up a 19th, which they discard and an eighth. Meanwhile, the Australians won a race and count the 13th from the other.

Just one point separates them with two more days of fleet racing remaining. Belgium’s Yannick Lefèbvre and Tom Pelsmaekers are eight points off the leading duo in third.

Day 3 – Light with delays before a bit of racing

The third day of competition at round three of Sailing’s World Cup Series in Hyères, France provided further challenges for the competitors as light winds continued to dominate.

The 647 sailors from 46 nations racing across the ten Olympic disciplines and one Para World Sailing event contested a variable 5-7knot breeze on day three which enabled the light wind specialists to move to the front of their fleets.

David Gilmour and Joel Turner (AUS) won the sole 49er race which was enough to propel them into the lead, overhauling Poland’s Dominik Buksak and Szymon Wierzbicki who led during the first two days.

The Polish duo finished 32nd in the race and although they discard it, they drop to third. Diego Botin and Iago Lopez (ESP) moved up to second after a fifth.

It is tight at the top in the 49erFX but Norway’s Helene Naess and Marie Ronningen continue to lead after one single race on Thursday. Denmark’s Ida Marie Nielsen and Marie Olsen reduced the deficit to four points to occupy second place. Meanwhile Alex Maloney and Molly Meech (NZL) slipped down to third but firmly in contention for gold.

There was not much change on the Nacra 17 leaderboard. The Italians, Ruggero Tita and Caterina Marianna Banti, hold onto their lead after day three, whilst Ben Saxton and Nicola Boniface (GBR) remain second. The Brazilians, Samuel Albrecht and Bruna Martinelli Cesário de Mello, moved up one place and now sit third.

The South of France delivered a sensational day of sunshine and some stable breeze, living up to its name as a famous sailing location on the fourth day of competition at Sailing’s World Cup Series in Hyères, France.

After three days of light and testing winds under grey and foggy skies, the sun shone proudly on day four, enabling the competitors to start on schedule.

Ahead of the Medal Race, Italy’s Ruggero Tita and Caterina Marianna Banti (ITA) sealed Nacra 17 gold following a 2-5-1-1 scoreline which gives them an unassailable 40-point lead over Ben Saxton and Nicola Boniface (GBR).

From the 11-race series, the Italians have only finished out of the top five twice, mastering the conditions thrown at the 30-boat fleet.

Saxton and Boniface have all but confirmed a medal, sitting 15-points clear of Vittorio Bissaro and Maelle Frascari (ITA) and 20 clear of Iker Martinez and Olga Maslivets (ESP).

The real battle in Saturday’s Medal Race will be between Bissaro and Frascari, the Spanish duo and Austria’s Thomas Zajac and Barbara Matz. The trio are separated by six points and will all be targeting one of the final places on the podium.

Four 49erFX races stirred up the leader board ahead of the Medal Race. Ida Marie Nielsen and Marie Olsen (DEN) sailed consistently to overhaul the early pacesetters, Helene Naess and Marie Ronningen (NOR), who dropped to third.

“We made a few small mistakes which cost a lot. In the last race we made a mistake on the first upwind. We went from tenth to 20th in about 15 seconds and then we were stuck in the middle of the fleet fighting for a comeback.

“We had more wind today than the rest of the week, so it was a good day of racing.”

New Zealand’s Alex Maloney and Molly Meech are five points off the Danish duo with the Norwegians, who were unable to find the consistency that served them well at the start of the week, 16 points off the leaders.

The stars of the day were Charlotte Dobson and Saskia Tidey who moved up into medal contention after a 1-6-4-1 scoreline. They are one point behind the Norwegians.

As the day went on the breeze started to diminish and just one race was possible for the 49er fleet.

Dominik Buksak and Szymon Wierzbicki (POL) moved back into first place after a third in the single race and lead David Gilmour and Joel Turner (AUS) by a single point after they finished 20th. Belgium’s Yannick Lefèbvre and Tom Pelsmaekers are ten points off the Aussies in third. 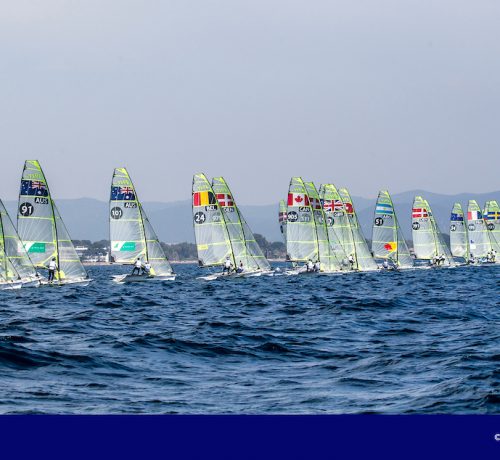 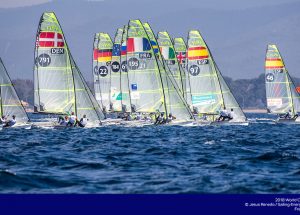 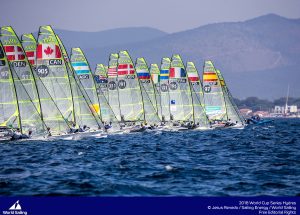 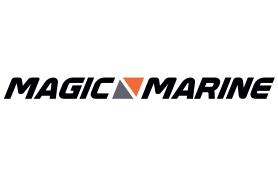