The 49er competition is full of the worlds big names in sailing.  Peter Burling and Blair Tuke of New Zealand won the last World Championship and were 2014 World Sailors of the year.  Nathan Outteridge and Iain Jensen of Australia won the 2012 Olympic Gold medal.  Both of these two teams are helmsman and trimmers for America’s Cup teams (Team New Zealand and Artemis Racing respectively) and represent the pinnacle of the sport.  They will be going head to head for the win, with another 8 or so teams that could challenge seriously from the fleet.

Both the 49erFX and Nacra 17 fleets are new to the Olympics so it less assured who the favorites are as the worlds sailors sort out how best to sail these boats and learn to work together as teams.  What both boats represent is a huge leap forward for female sailing.  Before this Olympics there were only slow and traditional boats available for women to sail.  Now the girls get 2 extreme boat options, just like the guys, and they are loving it.

Over 120 teams from more than 37 countries will be competing in front of the Pier on Clearwater Beach, Florida.  In addition, to competing for the Championship title there are competitions within the competition.  Many national federation will use the regatta to determine who from their country will get to represent them at the Olympics, as every country gets a maximum of 1 team per event per country.

The countries using this championship for selection include:

Here are some Key facts for the US teams heading into the regatta:

The racing will be live broadcast on youtube for the final three days.  Sign up to get email updates throughout the week and follow on social media @49ersailing 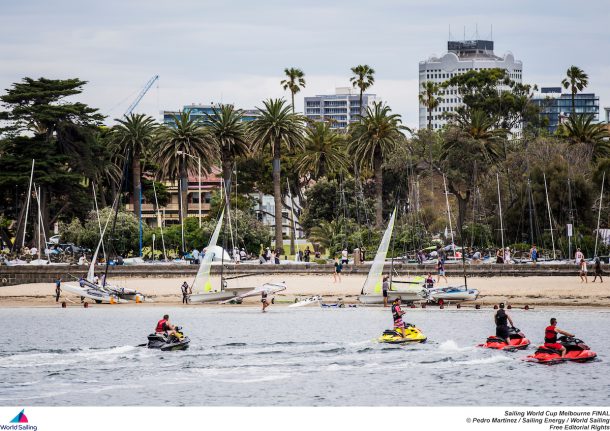