Miami continues to be the go to destination for the worlds Olympic sailing teams as the mid-winter haven for good weather, good training, and a quality regatta.  There are some high profile absentees like Burling/Tuke from New Zealand and Heil/Ploessel from Germany in the 49er and the Spanish and Finnish teams from the 49erFX, but for the most part all the top teams are in Miami.

Sailing World Cup Miami 2016 has some extra incentives for sailors from North and South America as in each fleet a single additional Olympic nation berth will be at stake.  Olympic qualifying is a three stage process for Rio, check out the explanation here.

For those keeping track, there were no unqualified 49er or 49erFX teams from the Oceania region, so already the 4th highest ranked teams from the 2015 Worlds. Croatia in the 49er will be making their third straight appearance at the Olympics, and for the 49erFX the nation of Norway has qualified with their two teams, the Agerup Sisters and Saillife.no still fighting for the spot.  Riding high from their Olympic qualification, check out this post from team Norway after Day 1 in Miami. 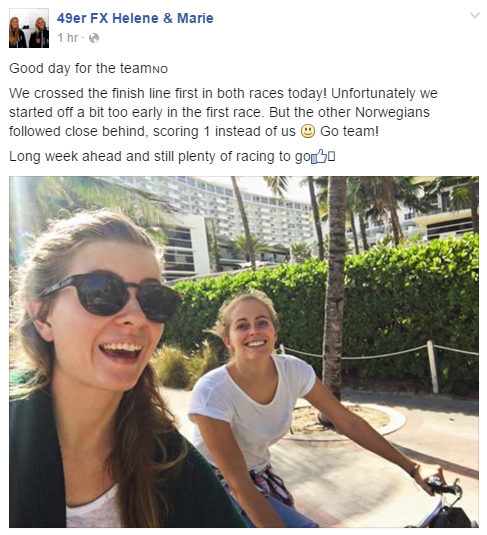 In Miami two more Olympic national berths will be awarded. The 49er has a great fight in both 49er and 49erFX. From South America both Uruguay and Chile will slug it out since Argentina qualified at worlds. Santi Silveira and Phillipe Umpiere were very close to qualifying for the 2012 games, and won the 2013 South American Championship. Their training has been hampered by work and illness in 2014, where they had to back out of the Santander Worlds, but they have been back at it since mid-2015 and have had moments of top flight pace. From Chile are the Grez brothers. These two started in the 49er late in the London quad and have been training hard for the last four years. For both of these teams qualifying will be absolutely critical as if only one of the two makes gold fleet then the contest will be decided there.

From North America there are three nations competing for the single berth, but 16 teams. With the championship on home water, and no teams yet qualified from North America, it will be a very tough battle. Leading in numbers and pedigree are the Americans, with 9 teams entered including the Brad Funk and Trevor Burd, who were third place at this regatta in 2014, and a number of both experienced teams in new configurations and talented newcomers. The Canadians squad has 6 teams fighting for the berth, including two teams who have campaigned for the whole quad and returning fleet favorite Jon Lahda, who nearly qualified for the Canadian berth in 2012. The final push is from the British Virgin Islands, who send a single team but one that has trained hard since 2013 and has been consistently improving all quad long. You can meet Alec and Chris here. Only one of these three nations will get a spot and then the remaining teams will be out of luck, having to wait until Tokyo for their chance.

The 49erFX is more straight forward in some ways but contains a twist, and there is plenty on the line. For South America, there is only one team entered from Chile. The sisters Arantza and Begonia Gumucio are relative newcomers to 49erFX racing but over the past two years have trained diligently and will represent their nation nicely by the time Rio rolls around.

From North America there are three nations and five teams fighting for the single spot as Canada qualified at Worlds. The US Virgin is represented by 2012 Olympian Mimi Roller and her crew Agustina Barbuto. They have had a few moments of popping to the front of the 49erFX fleet like they were at the 2015 South American’s where they finished in 10th. From Aruba are a new young team of sisters in their first year of 49er after some laser and 29er sailing.  These Van Aanholt sister, Odile and Phillipine represent the newest in a long tradition of sibling skiff sailors. From the USA there are three teams entered headlined by 18 year old Paris Henken and her crew Helena Scutt. This duo were the 6th placed country at worlds and have placed consistently well for much of the quadrennial. Indeed, it would be somewhat of an upset for America to miss out on the 49erFX Olympics given that they started the quad with three gold medallists and a number of other top sailors chasing the skiff prize. With Ana Tunnicliffe chasing her CrossFit pursuits now and both the other teams backing away, it has left room for newcomers to rise to the occasion.

Why, would you ask, was the nugget of Paris and Helena’s sixth place finish included in the write up? At the top we mentioned that 4 49erFX teams have already been awarded spots from the 2015 Worlds. We also suspect there will be no 49erFX entries from Africa at the African qualifiers, which is in Palma in March. When and if that place opens up, the fifth place team would earn the spot, that being Ireland. Should the USA miss in Miami, would they aim to claim their place next in line should the Irish win the European Qualifier in Palma, the same regatta? It is the class understanding that the order of qualification should not matter, and should the 5th spot open up and Ireland claim it, then the next team in line from Europe at the European qualifier would get the spot, but since the wording was not perfectly clear there is a case to be made, or certainly room for debate as to what team would be next up for the African spot.

The start was faltering to a regatta that many teams from the America’s are calling the most important of their careers.  The 49er fleet managed just 1 and a half races, in that one qualifying fleet got two races and the other only got one race.  Brad Funk and Trevor Burd had a solid start, but most teams will be thinking of just how much more racing there will be rather than counting what’s happened so far.  For the second regatta in a row we see Nathan Outteridge and Ian Jensen start off with an off day, but in reality Miami in the light is a very difficult place to sail if starts don’t go well, so not very much should be read into a bad race or two.  The 49er sailors waited around for a while but were then dismissed leaving the 49erFX fleet the chance to race as the afternoon breeze came in late.  Middling results from those chasing qualification so far, but Agerup Sisters of Norway seized an early lead after two solid races, including a win.

Shipping Overview: We no longer have the Rowing Club as a venue. The containers must be unloaded, then stored offsite. The unload location is: Lot 71, Seminole Boat Ramp 2710 S. Bayshore Drive Miami, FL  33133 USA Offsite storage can be arranged privately through your forwarder (or through the contact in the link below) but we are also looking into a city option for a nominal fee.   The unloading site does not have a loading dock (shelf), and it will not be possible to use the roll on/roll off delivery trucks like we used at Rowing Center.  There are no side loader trucks  and cranes are your responsibility, but Rock-It Cargo (see link below) will attempt to combine deliveries and minimize crane expense. There is not a forklift onsite, but there are nearby marinas that you could coordinate with.   There are many warehouses in the Miami area that could accept your containers for unloading and possibly storage.  Your forwarder may already have a relationship with one of them.   The delivery address and boat ramp is where the 49er, FX and Nacras will be sailing out of, there is launching from the ramp.   Let me know if you have any additional questions after referencing http://miami.ussailing.org/competitor_information/shipping/ for other resources Email the regatta office with the timing of your container.