The second day of races in classes 49er and 49erFX was long, with more hoped for in terms of  the wind.  But on a winter sunny Rio de Janeiro there is no way the wind won’t even appear.

Once again the sailors who are competing for the 28th International Sailing Week at the Yacht Club of Rio de Janeiro were on the ground for more than an hour waiting until a breeze blowing a little stronger in the Guanabara Bay.

In the Naval Academy course were the classes 49er and 49erFX. Unlike Monday, the girls who ran more races today, three in total, against two men. Alex Maloney and Molly Meech lead the competition with two wins today among girls.  “The sail was very tasty, with enough wind hanging around. We are happy to return to sailing on the river, but every day is a new challenge, “said Alex.

After a silver at the Europeans, the Schutt Sisters sit in second place while recent Pan Am Gold Medallists Vicky Travascio and Sol Branz sit in third place with boat teams maintaining their good fleeing and momentum after their recent successes.

The New Zealand countrymen of Alex and Molly, Peter Burling and Blair Tuke, lead among men, with a victory today and an eighth place.  They are tied with Frenchmen Manu Dyen and Stephane Christidis and there are a total of 6 teams within 5 points of the lead, so the regatta will be decided tomorrow.  Manu and Stephane return from an extended injury absence and just like after their absence in 2013 where they returned to medal at the World Championship, the veteran duo are on form immediately.

Who deserves to be highlighted today among Brazilians is double Marco Grael and Gabriel Borges, the 49er. The boys finished the second race of the series in second place and moved up to eighth overall. “This is the second year we have foreigners here training with us and we are trying to hit for the Test Event, which will be very important to us. The conditions of the last two days were not so good, the wind always entered late and therefore turned on afterwards. But winter is good, not normally windy. We have to take the conditions as they are, then, is what we will find in the Test Event and the Olympic Games, “said Marco.

The conditions in Rio really make the events high stakes.  The results show little in the way of consistency among almost any teams, with results up and down.  The picture is further intensified by the short days and fickle wind, which does allow some racing but usually not a full day, and it is tremendously shifty and puffy.  All the teams will be using this time to prepare themselves for the roller-coaster events of Test Event 2015 and ultimately Rio 2016.  The teams will have to balance patience by waiting on shore, with patience on the water in tricky racing, with the intensity to seize opportunities and take races when it counts.

On Thursday it is expected that up to four for the 49er and 49er FX will be held.

To check out all the competition results visit the official site: www.sivrio.com.br. The 28th International Week River Sailing is organized Yacht Club of Rio de Janeiro and has the support of CBVela. 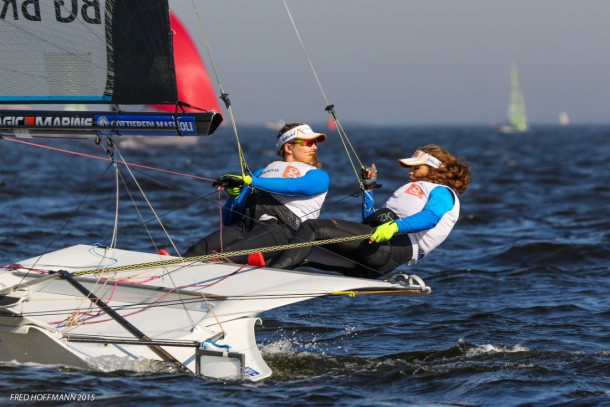 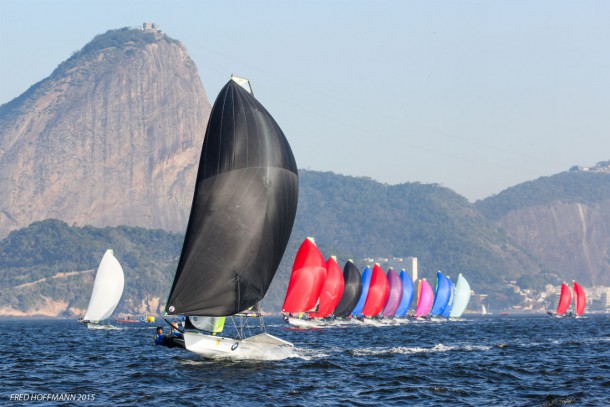 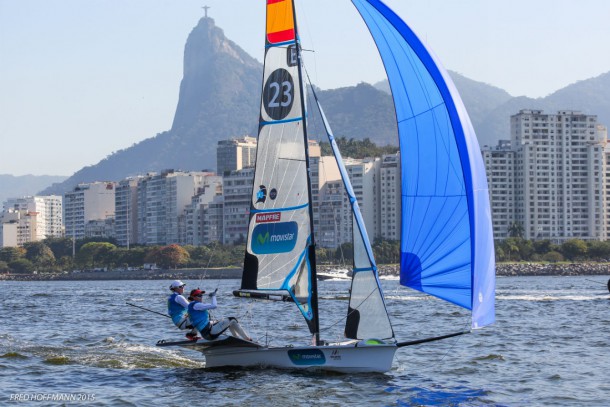 Only 1 team may enter from any nation, so the intra-squad competition has been tight for many competitors.  Further, many squads will bring complete support staff to the event to give everyone a full warm up to the Olympics.

Both the 49er and 49erFX regattas will be tightly fought, though last year was a disapointment wind wise and organizationally as the best winds were in the early morning hours and the organization was not flexible enough to conduct the racing then.  The 49erFX raced only 2 days of 4 while the 49er raced 3 days of 4, though one of the days there was only 1 race which is always a good indicator of poor racing conditions.

Much of the focus for the worlds press will be on the pollution in the water of Gunabara bay, but the sailors, like always will be looking at the wind, current, and possibly trash, but certainly their competitors.