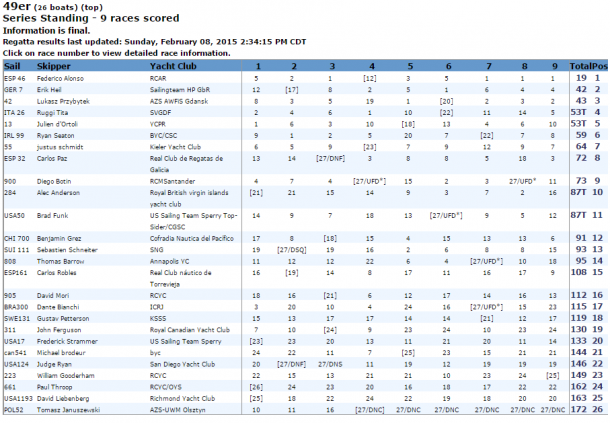 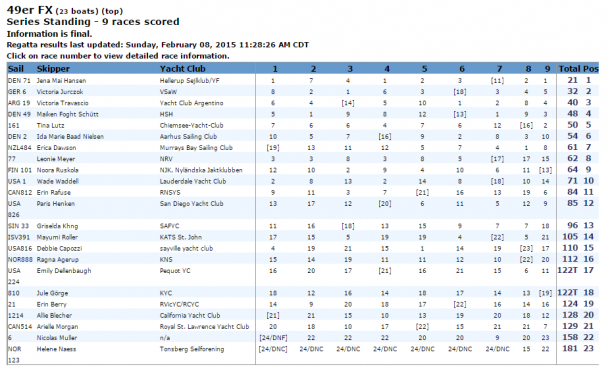 The 49erFX were up first on the day starting crisply at 10:30 am.  Under clear skies and a chilly 12 knots of breeze, the 22 strong fleet got going. After sitting on shore for day 1, the competitors were quite keen to get racing.Wisely, experienced Race Officer David Campbell James used the U flag to prevent any general recalls and keep racing on a tight schedule. This being the first 49er event ever in beautiful Clearwater, competitors were unsure of which side to take in race 1. After seeing a major split half way up the beat it became apparent that the right hand side of the course, nearer to the beach was favored. Revealing what would become a day long battle, Danes Jena Hansen / Katja Iversen and Germans Victoria Jurczok / Aniko Llorenz came off the beach and dueled it out through the rounding and on the downwind.

Hansen and Iversen got the day started with a nice bullet and followed that up some middling scores before winning the final race.  Jurczok and Llorenz did the opposite, but scoring a 1 – 2 in the middle two races with worse scores to start and finish the day.

In race two, Argenitina’s Vicky Travascio and Sol Branz got into the front bunch with some good tactics and boat speed after a tough start.  The Schutt sisters (DEN) stuck around them at the leeward gates and took the win.

With 4 races down it is still a wide open event so there are many points still to come.  Ida Nielsen and Marie Olsen (DEN) will be thankful of that after a very rough first day for them.  They did keep plodding each race to claw back a few points, only the next 2 days will determine if that effort will be a help in getting them back near the top or a sign of things to come.

The 49er fleet got going immediately after the 49erFX.  The breeze had shifted 20 degrees to the left in the last 49erFX race which meant there was a long fetch in the new upwind direction.  The immediate effect was much larger waves to fully challenge the 49er fleet.  The first race of the day was one sided, with all the top guns aiming for the left corner assuming the wind would keep backing.

Julien D’Ortoli and Noe Depesch (FRA) were hipped up on Ruggi Tita and Giacamo Cavalli (ITA) who lead the fleet into the left corner.  In fully powered conditions, ultimately the French snuck by the second beat to open the regatta with a bullet.

In the second race of the day, the course was much more balanced in terms of where to head.  The Alonso brothers upped the power on their rig and using their good speed seemed to catch a number of shifts.  By the top of the 2nd beat they had set up just outside of the leading Irish team who were pinching to make the top mark.  They closed the distance and took a little more speed into the bear away and hoisted into a high lane above the Irish.  A quarter of the way down the run they managed to force the Irish into an early gybe.  One kilometer down the course after both teams converged at the layline, the Alonso’s grind almost payed off, but they failed to take the bullet by just over 1 meter, a great battle.

Race three got under way with even a few more knots of wind and even larger waves.  Puffs pushed up to 18 knots and the sea state, especially at the bottom of the course was treacherous.  Many of the big guns held their lanes off the start save for the Irish and Paz brothers who headed right and the Germans who were forced out of the lineup.  The Alonsos carried the boat start toward the left and then came back early, leaving the French, Ruggi Titta, and Diego Botin fighting for the left corner.

Initially it looked like the right side would pay, but as the shifts cycled it ended up pretty evenly with teams from all sides in the top 6.  The Paz brothers had a decent lead into the leeward marks when they capsized on their last gybe.  The Irish managed a better leeward mark rounding around the outside of Diego Botin while the Alonso’s took the other gate.  By the windward mark the Alonso superior boats speed got them into the lead and they took the final race of the day, just ahead of the Irish and French.