2015 marked the fourth ever Junior World Championship for 49er and the third for the 49erFX as 69 teams assembled in Flensburg, Germany to compete for the U24 titles.  Much of the championship was blustery, with all races in full power conditions and occasionally into survival mode.  It was a test for a broad spectrum of teams, from those newly entering the class to some already with a few years of campaigning under their belts.

Junior World Championships are playing an increasing role in sailor development as a mid-career competitive goal, a stepping stone between Youth Worlds (U19) and Senior Worlds/Olympics, where most teams are in their late 20’s and early 30’s.  The U24 championship also provides a sanity check for younger sailors in the fleet where they get a chance to look at their performances within the context of their age and experience and a break from looking at the transoms of 49er and 49erFX legends.  As such, Flensburg provided a social aspect to the event so that a new generation of sailors can really get to know one another.  Further, Seiko continued with their Development Program and provided a neutral coach for the event and lead up training in Francisco Andrade, two time Olympian from Portugal who was made available to all teams and coaches for support, tips, and a chance to learn from the best.

On the race course, the 49er fleet was large enough that the first two days of the event were split into qualifying with the final two days for gold and silver fleet racing.  49er boats marks another record setting number of competitors in the 49er which has grown in size each year the event has occurred.  The 49erFX fleet was open, so along with the 22 49erFX teams registered there were an additional 4 male/mixed teams that competed in the championship.  In all cases, the races were conducted under near perfect fleet sizes of 25 boats, giving all teams a chance at clear winds and fun racing.

The 49erFX  championship went down to the wire, with five teams in with a decent shot of winning the championship heading into the medal race.  There were ten fleet races conducted over three days, with no racing on day 2 for the 49erFX as a system came through with winds upwards of 30 knots.  Leading the fleet were last years Silver Medallists, the Gorge sisters from Germany with a four point lead over first time entrants, Jeske Kisters and Josca Hummel from the Netherlands.  Following them were the Wedemeyer sisters from Germany, the Agerup Sisters from Norway, and then four British teams that all train together, one all female teams and three male/mixed teams all spending time in the 49erFX en-route to 49er sailing.

The medal race was a scrambly affair, with huge pressure changes and shifts, sometimes even dropping completely.  The Dutch duo managed a second place while the Gorge sisters could fair no better than ninth creating a lead change for the win.  Jeske and Josca are relatively new to 49erFX sailing.  Josca sailed 2014 with a number of team mates, switching between helming and crewing and joined forces with Jeske for Palma this year.  Unfortunately, Jeske injured her knee early on this year so had to take some time off.  They train normally with the Dutch 49er guys and their coach Kai. 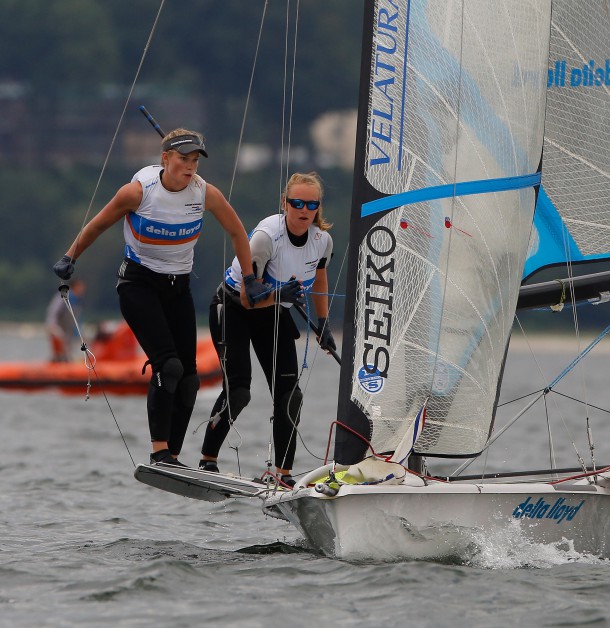 The 49er regatta was a closely contested event with a number of teams aiming at the Junior Title as their major goal for the season, with more experience compatriots ahead of them in the global rankings.  The regatta was a very difficult one, with frequent blustery conditions and plenty of touch competition.  In the end, it was close, but a good medal race kept Bildstein and Hussl in the lead.  The duo won the silver medal two years ago, were fifth overall last year, and it was their last chance to race in the competition! 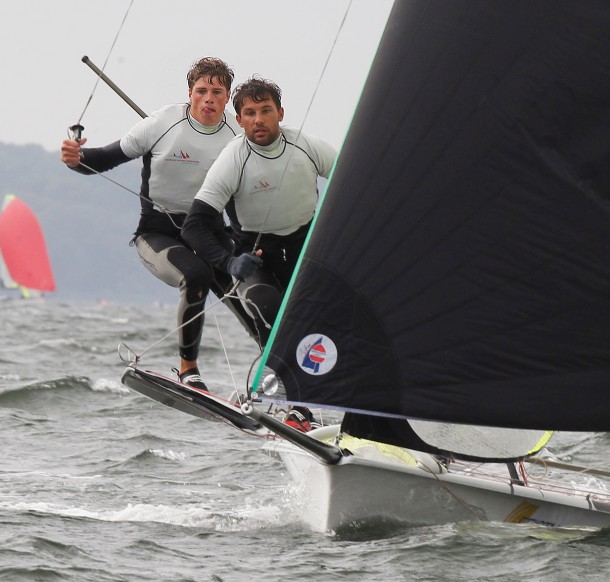 Pre-Information from the Flensburger Segel-Club.