Fan Turned Up For Final Day In Hyères

Last on the race track on the final day, the 49erFX provided a blockbuster conclusion.

Big breeze and big waves tested the 49erFX sailors and there were some thrills, spills and close shaves in a testing race. One point split overnight leaders Martine Grael and Kahena Kunze (BRA) and Denmark’s Ida Marie Baad Nielsen and Marie Thusgaard Olsen coming into the day.

Following a clear start and intriguing upwind leg, the first mark saw the Danes hold the advantage, getting clear air in their sails. However a close rounding saw the Brazilians touch the mark resulting in a penalty turn and from there they were always playing catch up.

The Danes were able to edge away ensuring an uphill battle for the Brazilians. Pushing their 49erFX to its limits Grael and Kunze lost a bit of control on the second downwind but expertly held it together, with Grael hanging out of the boat yet keeping it upright.

Meanwhile the Danes were never under great pressure, working through the motions and despite being pipped to the Medal Race win by compatriots Jena Hansen and Katja Salskov-Iversen (DEN) they claimed gold by seven points over silver recipients Grael and Kunze.

“We had a really good race,” commented the pair almost in tandem. “We kept calm throughout the course and that was important in these conditions. “We kept it simple, without pressure and sailed fast.”

Giulia Conti and Francesca Clapcich (ITA) held on to bronze after a fifth. After racing Conti said, “We made a few mistakes so we’re a little disappointed but we’re happy because we had good boat speed and handling. We are happy with bronze. It means a lot to us. After silver in Miami it’s important for us.”

Peter Burling and Blair Tuke (NZL) and Nathan Outteridge and Iain Jensen (AUS) had gold and silver wrapped up in advance of the Medal Race but there was a fight on for bronze.

The advantage ahead of the day was with David Gilmour and Rhys Mara (AUS). They had an eight point advantage over Germany’s Erik Heil and Thomas Ploessel and were in control for the first 50% of the race. However, on the second downwind disaster struck for Gilmour and Mara as they capsized and lost their third position. 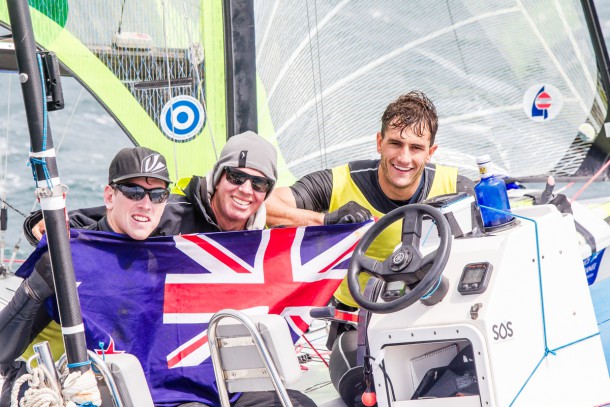