After 3 days of racing the 49ers have completed 9 races and have 3 races scheduled for the last day.  Only the top 10 will to qualify for the Final, so lets take a look at who’s got a shot.  Here are the results to have a look through.

Amazingly, Burling and Tuke already have a spot in the medal race mathematically secure, as even if they score three DNF’s tomorrow they’ll have 126 points and if 11th place Januszewski wins all three races they’ll have 127 points.

On the other end of the scale, we can see that all the way down to 38th place has a mathematical spot.  If 38th place wins every race and Silverlink teammates DNF every race, then Dave Evans and Ed Pows can move up, but given they have missed the last bunch of races that’s really unlikley. 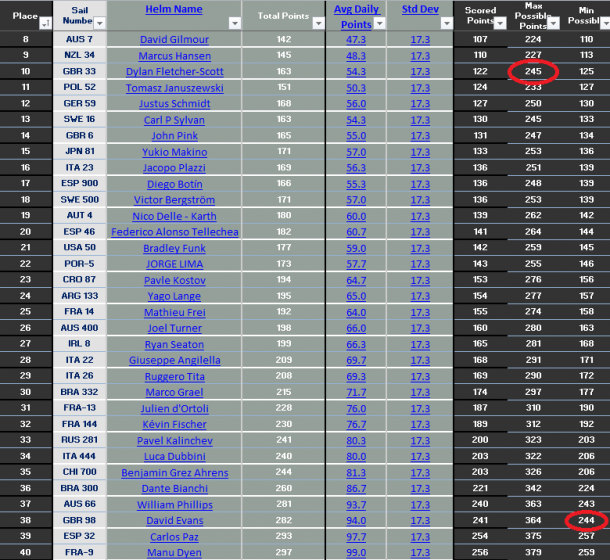 None of the extremes above really tells us who’s in the race for the top 10.  Teams obviously in the conversation for being included in the final are teams ranked 2nd through 9th.  Obviously, 10th has a shot too, but the question here is how many teams behind 10th can realistically dream of making it from the final day.  Assuming there are 3 races to go, here’s the breakdown.

Teams placing 10th through 20th are averaging 56 points per 3 races, which is how many races they should score tomorrow.  That puts 178 total points as the over/under for getting in.  We then calculate one standard devation of the scores from the racing, which is 17.3 points.  That means that 68% of the time, teams will score 56 points on a day +/- 17.3 points.  The teams with possible final scores highlighted in lime green are all within 1 standard deviation of our target score.

There is always the chance for an extreme day for a team.  To calculate the extreme scenario, we take 2 standard deviations, 2*17.3 for 34.6 points.  2 standard deviations gives us a 95% chance that our results will come from that group, that’s why surveys always report findings valid 19 times out of 20…  Our list of scores in dark green are our teams that are within 2 standard deviations of a shot at the final day.  That means from 2nd place down to 25th are all in the running tomorrow.

The higher a team is right now, the better a chance they have of making the final, but all of the top 25 teams have it within them to make a killer showing and qualify for finals!  That’s a lot of teams who will be all out to win some race!

Post Day: The stats seem to have worked.  Both 15 (JPN) and 22 (POR) scored just 1 and 2 standard deviations better than average and made the medal race.  178 points was not the magic number, that ended up being 175, but partly that’s due to 2 top teams not competing on the day lowering the average scores.  Only 1 team did better than 2 standard deviations from average, and that was 30th places Marco Grael and Gabriel Borges with 14 points on the day, but they still finished 10 points back of the magic number.