The 2014 ISAF Worlds in Santander is the first major event of the Rio Quadrennial that all teams aim to peak at.  10 country qualification spots were on the line, along with the chance to prove to the world and to the fleet who is really on top.  80 men’s 49er teams and 53 women’s 49erFX teams lined up to see who could win the championship and book a spot to the games.

First up was 5 races of qualifying scheduled over 2 days.  While qualifying is always a challenge it became especially critical with fewer races scheduled than normal, and was then further complicated by challenging weather and race course constraints.  In the end it took 3 days for the men and 4 for the women, and at times both fleets were pushed to the max with extreme winds for spectacular sailing! 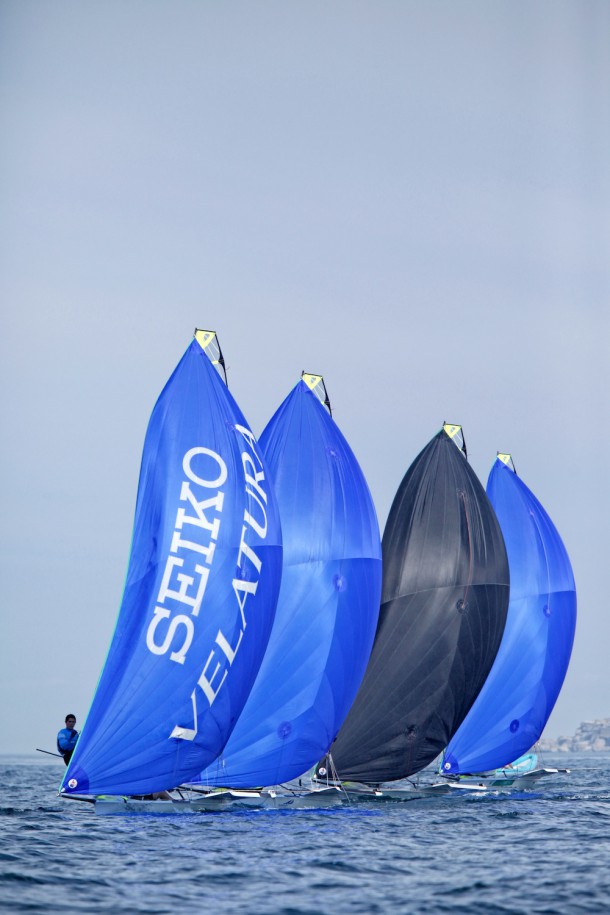 There were two high profile casualties of the qualifying as both the Silver and Bronze medalists from the 2014 European Championships landed in Bronze fleet.  Erik Heil (GER) had to do a last minute crew substitution as Thomas Ploessel injured his thumb and was unable to participate.  Dylan Fletcher and Alain Sign (GBR) suffered from one disqualification for a false start and were also unable to complete one race due to the extreme conditions.

The 49er Gold fleet got under way in thrilling conditions for these top sailors.  Four races were held in winds ranging from 15-25 knots, with a bit of shiftiness as well to really keep teams on their toes.  The regatta started to take shape, and that form was All Black!  Peter Burling and Blair Tuke (NZL) extended their lead to over 25 points, and still have a drop race to spare.  Their 1, 8, 2, 1 on day 1 of gold fleet was the best point total on the day, and puts them in fantastic position to wrap up their second straight World Championship and extend their unbeaten streak since London 2012.

The exclamation point on the day came late, as the 49er fleet was sent out for one final race on the #duna course to wow the evening crowds.  The grandstands were literally bursting as Burling and Tuke passed the Irish team of Seaton and McGovern at the bottom of the 2nd lap and then extended to a huge lead by the end of the race.  There is no questioning they are a leg up on the rest right now.

On the 49erFX side, Gold Fleet would decide everything as the points were very close for all the top teams. Due to the extended qualification, gold fleet was condensed to two days of racing, with four races on the first of the day.  The racing was in high winds and heavy seas, leaving sailors in the boat park decimated by the effort, both physically and emotionally.

One team that thrived under the challenge was Ida Nielsen and Marie Olsen (DEN) who had all top 10 finishes on the big day.  “They are sailing with a lot of confidence right now, sailing smartly and quickly, and it’s working for them,” said their coach, Peter Hansen.  The Danes have won both European Championships held in the 49erFX and are looking to add a World Title to their trophy cabinet.

Remaining in the hunt were Brazilians Martine Grael and Kahena Kunze, who started out they day with a 2, 1 before falling back to a 13 and 10 but were still tight on overall points.  Nobody has spent more time on podiums this season than the Rio natives, but the final step to top position has eluded them at top events to date.

What was guaranteed is that there will be a new world Champion in 2014.  2013 Champions Alex Maloney have had an up and down regatta and sit 51 points back, too many to have a realistic chance at the title.

In the top billing match up of the day, it was who beats who in the women’s skiff class.  Recent European Champions, Ida Nielsen & Marie Olsen (DEN) were just ahead of Martine Grael & Kahena Kunze (BRA).  The day got off to a slow start as the breeze built and then the teams were called to the race area.  “My heart was thumping in the pre-start,” said Martine Grael when asked about the significance of the moment.

It was an up and down race in about 6-8 knots of wind.  The Danes got off to a superior start and covered the Brazilians for the first lap closely.  Being an offshore wind, it was very puffy and shifty, without any true pattern for the sailors to lock into. Two-thirds of the way up the second beat and the Danes had a choice, follow their nose for the breeze or continue a tight cover on the Brazilians.  They chose to go on their own, and while it looked good for a short while, the Brazilians found an edge and moved past them at the top mark.  From there, nothing could stop the forward progress of Martine Greal and Kahena Kunze who emerged as world champions!  They celebrated emphatically with big smiles, bear hugs, and some swimming for the crowd!

It was disappointment for Neilsen & Olsen, who have been riding a high since July when they won both the Junior World Championship and the European Championship back to back.  It is a tremendously competitive fleet, however, and it is unlikely we will see any team dominate for too long.

In third place were Giulia Conti and Francesca Clapcich (ITA) who were guaranteed their position so used the race to enjoy themselves.  Giulia has been sailing recently with a male team mate while Francesca was out injured, and was relieved to have her normal crew back and to make it on the podium.

The medal race was just like the regatta, dominated by New Zealand.  Peter Burling and Blair Tuke (NZL) had an insurmountable lead going into the final.  They had a middling first beat, but then made their move with a gybe-set on the first run.  They got into the lead by the bottom marks and never looked back, taking a huge win in the medal race to cap their huge win in the regatta.  The duo are winning regattas and races by margins never seen before in the 49er, and look unstoppable.  Time will tell whether they can hold this kind of form all the way through to Rio.

The real fight in the medal race was for the Silver medal in the battle of Olympic gold medalists.  Jonas Warrer, the Beijing Gold medalist with Anders Thomsen (DEN) were only 2 points behind the London Gold medalists, Nathan Outteridge & Iain Jensen (AUS).  Nathan and Iain got out to a good start and were third around the first top mark while the Danes were back in eighth.  The winds continued to be unstable both in angle and intensity which lead to 5 lead changes for the silver medal in a 6 leg race.  On the final upwind the Danes got past the Aussies with a sizable distance between the two, looking like they had secured the silver.  Outteridge and Jensen never say die, however, and blitzed the second half of the downwind to pile on the pressure.  In traffic at the finish line both teams lunged for the line almost simultaneously and the Danes held on to secure their Silver medal by only half a meter leaving the Aussies to settle for Bronze.

The crowds were so big that it was standing room only, and they reserved their biggest cheers for the Paz brothers from Spain, who get their highest ever worlds finish with a 10th place. 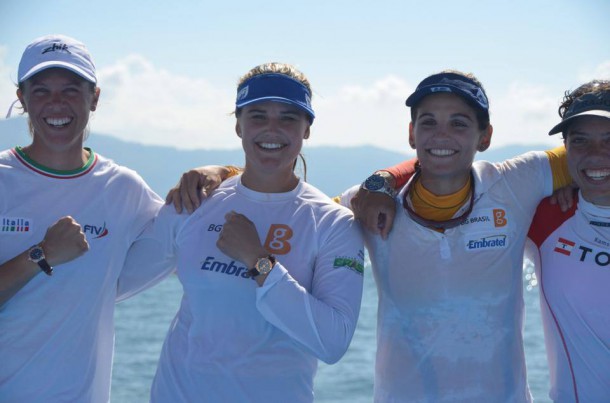 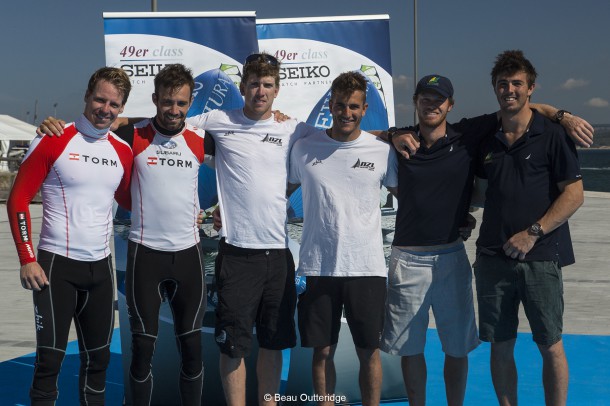 For collections of video and photos