You’ve already seen the ‘Who’s going to win preview‘, so this preview is about what Santander means to the 49er fleet.  If there is any doubt that Burling and Tuke (NZL) are the favorites going into the event they were erased at the 49er coaches regatta where they dominated again in a great fleet with a 29 point victory (43 without drop race).  Results below.

The Kiwis have been so dominant this year they don’t need to win the worlds to be considered the consensus top team any more.  It’s unlikely you’d find a single sailor or coach who would not admit to their current form being above the rest. 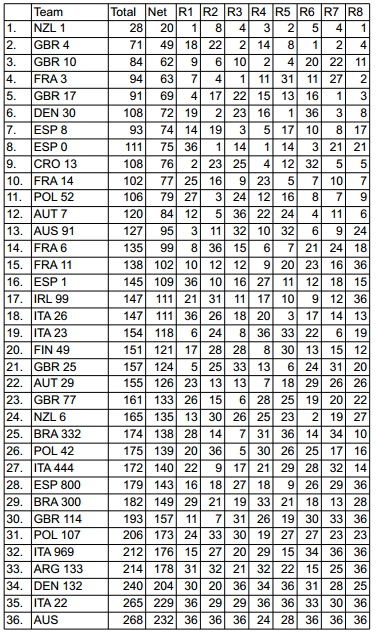 The ISAF Worlds is a multiclass event with creating it’s own set of challenges and compromises.  The qualification format will not be skiff standard.  Instead there will be 2 days of qualification for the 88 boat 49er fleet before they are partitioned to a Gold fleet of 25 boats.  There are 5 races scheduled including one drop race as instead of 10 races scheduled over 3 days.  Finally, the fleet is split into 2 groups instead of 3 with fleet sizes of 44 boats, the largest ever used in 49er racing.

These 3 diversions from typical skiff racing make qualifying for Gold fleet in Santander a really critical period of the regatta.  For many teams here the first 2 days, 5 races, will dominate how they perform at this worlds.  Even teams who make gold fleet may not be in the medal hunt due to carrying large point totals into a gold fleet series of only 25 boats.  There will be upsets for sure, so stay tuned to days 1 and 2.

Much of the Olympic circuit talk is of ‘process events’ or ‘practice regattas’, this is the real thing.  For the first time this quad teams will all be chasing results above all else.  One note to the above is with Nathan Outteridge and Iain Jensen.  While these two are certainly out to win, Santander 2014 marks the switch from the ‘off season’ to chasing Olympic gold fully.

Since London the Gold medalists have done all sorts of sailing but not so much in the 49er.  With Burling and Tuke having so much success, what does it mean that Nath and Goobs are only on idle?  There have been 4 teams who have dominated 49ers for stretches prior to Burling and Tuke, Chris Nicholson, Iker Martinez and Xabi Fernandez, Chris Draper and Simon Hiscocks, Nathan Outteridge and Ian Jensen.  In each case once they slipped from form, mostly due to distracting pursuits, they were not able to revive their way to the top.  With Outteridge and Jensen break this streak?  We won’t know for another 18 months or so, but it will be interesting to see how they go.

Not to be flippant or prejudice the racing, but there are some countries that will qualify for Rio pretty much no matter what happens due to having a sufficient number of top teams so luck should not play a factor… so of the 10 spots up for grabs in Santander, if you were a glib about the sport and a betting man you might say that 7 are already taken.  Statistically, they are, but they do still need to sail… having said that, here’s who should be qualified once it’s all settled:

That leaves 3 remaining spots and who wins those spots makes a big difference.  For those who pay attention to geography, there are only 2 continents represented in the 7 countries listed above.  In previous Olympics that did not matter, but for Rio, the third round of Qualifying will be continental qualifying.  For a country still trying to qualify, any team from your continent that makes it into the top 13 is one less country to compete with in the final ‘Continental’ qualifying round.  The 2015 Worlds and probably the 2015 SWC Final (Abu Dhabi) will each have open qualification spots making the total of 13 open spots, 1 for Brazil, and 6 more for the continents.

So with that overview, the countries really fighting for their continents have a lot of pressure.  Outside of Europe where there are large numbers of countries in the hunt, we have the USA, Japan, Argentina, and Uruguay.  If any of these countries make the top 10 in Santander, it will set of huge relief in Asia, South America, and North America respectively.  In each of these qualification zone a single team qualifying in the open rounds provides huge relief to the remaining teams on the continent.  They will all be out and fighting hard to provide a boost to their neighbors and themselves.

Within Europe the dogfight for the final qualification spot will be massively intense and no country will want to leave it until the final round to win their spot.  There is every incentive to avoid that fight and get in early and every spot that any of Ireland, Finland, Italy, Spain, Poland or others grab of the three remaining spots could leave the rest of the world shut out.

Within many countries, it is the fight for the Olympic place that is always bubbling below the surface of team training and sharing.  This cold war plays out Olympiad after Olympiad in some squads, and none more so than in the British Sailing team 49er squad.  Leading up to the 2012 (home) games, Team GBR had 3 teams that could all make equally compelling cases for their inclusion in London.  2008 Olympians Stevie Morrison and Ben Rhodes, Dylan Fletcher and Alain Sign, and John Pink and Rick Peacock all sailed good years in 2011 and through the spring of 2012 while none of them were world beaters that could not be ignored.  In the end, a section committee with an opaque system decided the fates of these 3 teams instead of sending the squad to the 2012 worlds to compete for the right to represent their country.

Morrison and Rhodes were chosen, and the fallout plays strongly here in Santander.  Of the remaining 2 teams, Pink and Peacock split up immediately, with Peacock retiring from Olympic sailing and moving on to a coaching career that will likely not soon include helping Team GBR.  Fletcher and Sign have continued but with the attitude of ‘never again’ being in a position where a group of selectors and find a case against them.  They have been the top British team at almost every major event since London and have won quite a few medal this year.

However, failure to win a medal and failure to be the top British team would tarnish the great season Fletcher and Sign have had and they will consider it a failure of their real goal of being the indisputable selectees for Rio.  For that reason there may be no team putting themselves under more pressure in Santander than Fletcher and Sign.  Each of their rivals have hired private coaches recently and are pushing 100% to make sure they remain in the hunt.  Pink has teamed up with 470 world champion Stuart Bithell and are frequently challenging for medals.  Dave Evans and Rick Peacock are persistently in the top 10 and often chasing medals.  Finally there is Nic Asher (the other half of the former 470 world champions) and Flynn Sterritt who sail like world beaters in training and will surely start putting things together in racing.  It’s going to be a great battle, sailing fans can only hope it will ultimately be decided on the water.

Silver medalists at the 2014 European Championship, Erik Heil and Thomas Ploessel have been off the water in the lead up to the 2014 Worlds.  Tommy has been ill for almost a month, but recovered ahead of the worlds.  Will the lack of training impact these two dynamo’s in Santander?… well we will never know.  Tommy has now cut a tendon in his tumb on a piece of broken glass and has withdrawn from the Worlds.  Erik will sail with a new crew, but it will be a real challenge now to get back onto the podium.

There was no team more improved between London 2012 and August 2013 than Julien D’Ortoli and Noe Delpesh of France.  They finished the 2013 Europeans tied for 3rd and looked poised to become real challengers at the front of the fleet.  Then Manu Dyen and Stephane Christidis came out from their year off and had a great regatta at the worlds in 2013 finishing with the Bronze… we have heard little from Julien and Noe since.  Can they get over the longstanding standout Dyen and move back into the podium fight?

The Danes are a squad on a roll having won medals 2 games in a row, but the crews spend plenty of time changing who is sailing with who.  Following the 2012 Bronze Medal for Nooreggaard and Lang, the sailing scene was rocked to learn that Warrer and Lang were to team up while Noorreggaard started sailing with Anders Thomsen taking Silver at the 2012 Europeans.  At the end of 2013 Noorreggaard then shifted again, with both he and Thomsen jumping to the Nacra pairing up with a duo of 49erFX sailors.  Now things have shifted again and Warrer and Lang have split with Warrer joining forces with Thomsen.  Denmark may be proving that a base set of skills in skiffs are interchangeable, but what we really  want to know is can Warrer and Thomsen bond enough to get into the podium fight?

It’s Going to Be Beautiful

Teams have been training solidly in Santander and there is no disputing how good a place it is to sail.  The coastlines are wonderful, the wind challenging and changeable, and the facilities world class.  Here is a few teaser photos from recent training that highlights some of the best scenes.  Racing starts for the 49er and 49erFX on the 15th with qualifying.  The medal race final will be on Sunday the 21st of September and will be live broadcast.  Find all the results at sandander2014.com and follow 49er interests at http://49er.org/2014-world-championships/ 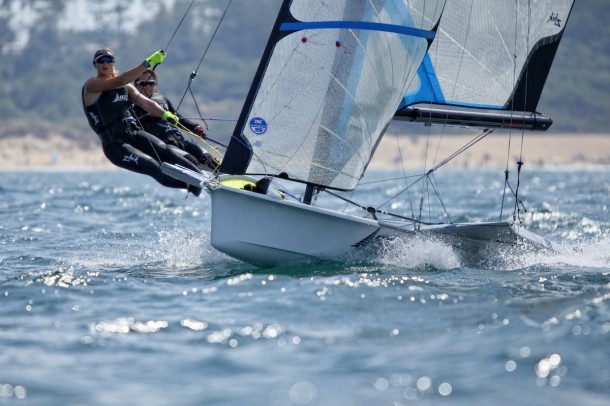 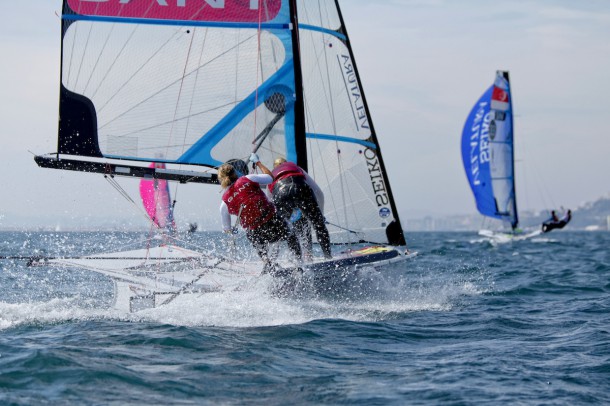 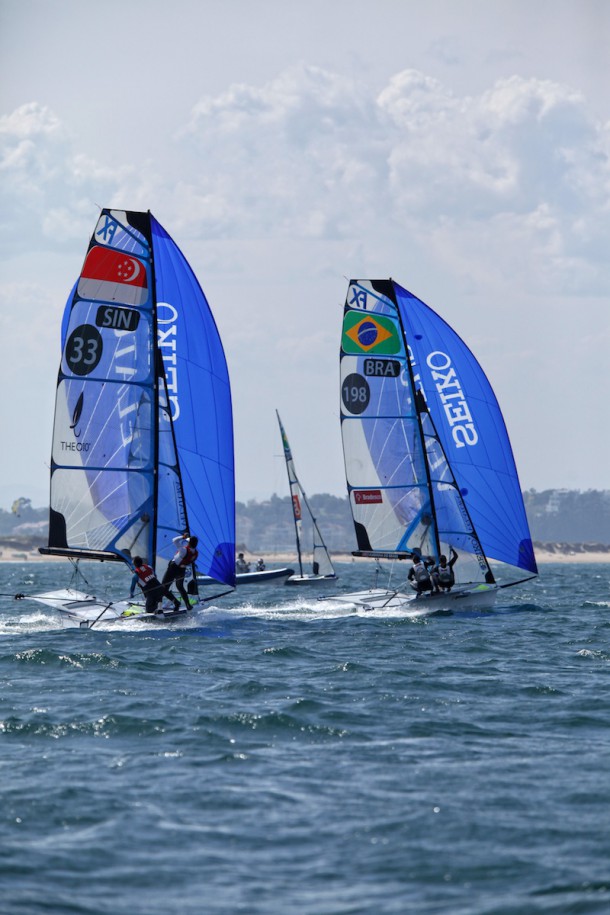 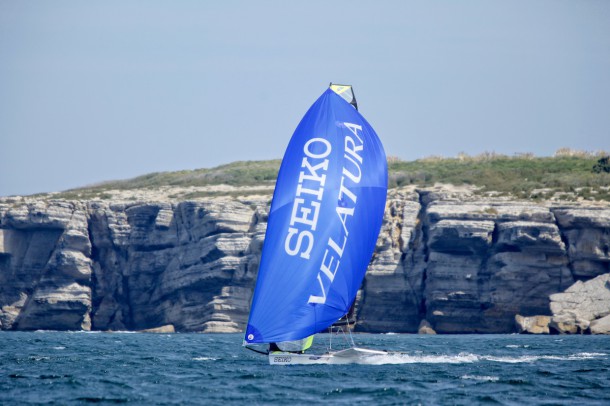