April 3, 2014 – Sailing World Cup of Palma
Overnight the USS Harry Truman, a Nimitz Class Aircraft carrier, came into the bay of Palma, quite possibly to escape the weather.  At the same time, the 49erFX fleet took to sea and thrived under tough conditions.  Almost one year ago to the day, these elite female sailors were happy merely to survive; today they were loving it! 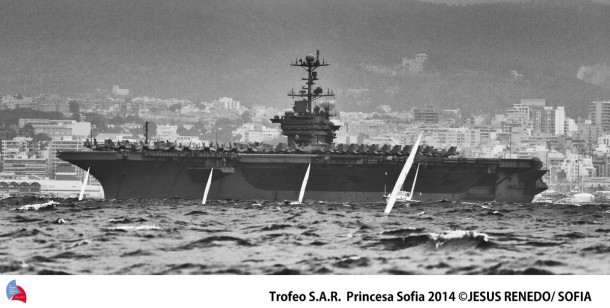 None more so than 2013 SAP European Champions Ida Neilsen and Marie Olsen of Denmark. They had a perfect day winning all three races. Unlike at this regatta last year when they were able to secure the overall regatta crown and they were one of the only teams prepared for the breeze, they had to race for it today through solid upwind sailing and aggressive passing downwind. They were particularly successful at pushing their competitors after setting the spinnakers and managed to make passes soon after the windward mark in both the first and second races today.

Ever consistent were Martine Grael and Kahena Kunze of Brazil. The duo had another day of all top 5 finishes, to maintain their lead. Neilsen and Grael have created a large gap to separate themselves from the rest of the pack. No doubt each will have their eyes set on the other with two days to go.

Also sailing well today were Lutz & Beuke of Germany who scored all top 10’s. They were unlucky in race 2 as they missed the giant storm cloud that shifted the breeze severely to the right on the second beat, and 6 teams managed to leapfrog them pushing them back to 8th. They remarked how they are no long scared of sailing in high winds and waves any more. They now clearly look forward to the tougher conditions.

Two of the biggest surprises so far have been the sailing of the French and New Zealanders. First and Third respectively at the 2013 World Championships, the Kiwi’s have been off the pace all week while the French have begun to struggle with the breeze in the higher ranges. Both will have their work cut out for them to make the medal race.

Conditions continued to get wilder for the 49er fleet as they took to the course after the 49erFX. The first race was manageable, but definitely top end as the waves crew and even began breaking near the bottom of the course. Denmark’s Warrer and Lang took the first race and were followed by the Austrian Niko’s.

The second race of the day would prove to be the last for the 49er. Nobody managed to navigate the course without capsizing, and of the 25 boats only 12 were able to get across the line in time. First to complete the course were the New Zealander Burling and Tuke, who capsized once on each lap, but it was enough to outdo the rest of the fleet. “It’s not often you swim twice and end up with a 5, 1,” said Burling.  They have built up an 18 point lead over the Danes, with 2 days to go in the event.

Least lucky in the race were the Portuguese team of Jorge Lima and Joao Costa. They were leading the race with less than 100 meters to go when they capsized. By the time they were under control again the window had closed and they were scored DNF, along with 12 other, severely hurting their chances of qualifying for the Finals on Saturday.

The third race of the day was cancelled leaving the 49er fleet to get home in one piece.  The beach and breakwall are at the bottom of the bay and waves started breaking around the entrance.  A number team capsized from the surf and had to be rescued by their friends and coaches for the most part before there was too much damage but a number of mast sections were snapped in the sand.

With two days to go there is much racing to be done.  Conditions are expected to be windy but under brighter skies through the rest of the event.  There was some live video coverage of the 49erFX races before the rain set in.  You can see the skies darken and follow some of the battles at the top half of the course. 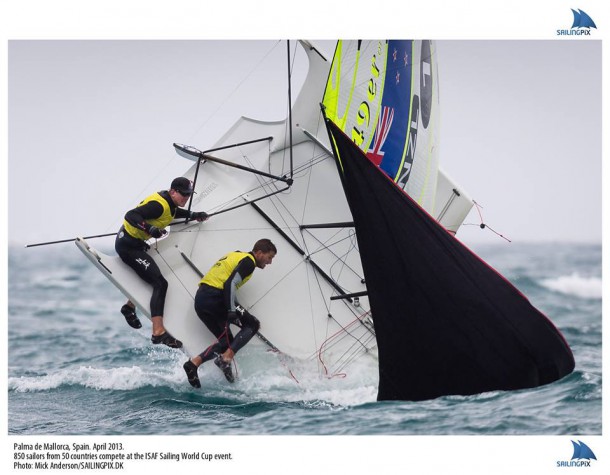 The format of the regatta is 2 days of split fleet qualifying, with 50% of the fleet racing together at any one time.  Then the top 25 teams will make it to gold fleet for 3 days of gold fleet racing.  Finally, the top 10 will race in the theatre, for 3 X 10 minute, single point races.