Day 4  of the 49er Junior World Championship was a two stage affair.  The morning had two normal races for all fleets, followed by the afternoon where the top 10 from each fleet raced three Theatre Races to complete the championship.

Aarhus delivered another day of westerly unstable winds from 8-12 knots, a fitting continuation of the challenge these U24 sailors have faced all week.  Much of the 49er fleet was initially focused on getting their spot in the top 10 final.

In the 49erFX fleet, places 2-5 were all looking to have a good couple or races to ensure that Ida Nielsen & Marie Olsen (DEN) couldn’t run away with the championship.

Also decided in the morning racing was the first ever mixed/male 49erFX champions as only all-female teams were permitted to sail in the final.  Two Dutch teams were only 2 points apart with van Dijk & Hummel (NED) on 67 points and van Stekelenbourg & van der Werken (NED) on 69 points.  Only one team could take home the Seiko watches!  After the first race, it was a role reversal leaving the mixed team of Dijk & Hummel chasing and down by 6 points.  After the wind became even more unstable, race 11 was abandoned, so the opening portion of the regatta concluded after 10 of the scheduled 11 races sailed.

At the front of the 49erFX fleet, Ida Nielsen & Marie Olsen (DEN) gained another few points on the fleet by winning race 10 while their two main rivals placed 3rd and 4th respectively.  These two won the 49erFX European Championship on these same waters almost exactly 1 year ago and take a commanding 19 point lead into the final.  With only 27 points of separation possible, it is almost a certainty they will be crowned champions in front of a home crowd once more.

In the 49er fleet, it was a nervous Paya & del Arco (ESP) this morning according to long time teammate since opti’s Patricia Cora.  They tried to setting things down by sticking to their routines and managed a 13, which for them was a drop.  Luckily, the second place Lubeck brothers (DEN) also sailed a drop, so they maintain a 14 point lead into the finals.

Places 2nd through 7th were very close, with only 16 points separating those 6 teams who will all fight for the podium watches.  Bildstein and Hussl (AUT) won the 10th race, moving them up to third overall, and their highest position so far in the championship.  Into the final spot landed Dave Mori and Justin Barnes (CAN) securing their first trip to the theatre.

At 13:30, the wind filled in from the sea breeze direction and smiles could be seen all over the boat park and race officer corps – finally some steady winds!  The course was set and the top 10 teams lined up for the first race.  As the race progressed it became clear that the dream of steady winds was not to be.  The wind became patchy, and quick to take advantage of it were Netherland’s Bekkering & Duetz.  There were many ups and downs, but they did manage to pick up the win while rivals Nielsen and Olsen (DEN) finished in last place after a series of times getting stuck in various holes.  The improbably comeback from 24 points down became a tiny bit more probable, as the Dutch moved to 15 points back with 18 points on the table.

A second race was started, but it was soon abandoned after the the wind died completely.  A series of rain squalls and clouds drove the windspeed and direction in circles.  With the time limit of 18:00 approaching, the race committee managed to rattle off 2 quick races in succession.  Nielsen and Olesen won race 2 by a wide margin and completed their second straight championship title in a row on home waters.  Bekkering and Blom sailed well to move into 2nd overall, followed by the Gorge sisters from Germany with the bronze.  Catch all the action on video too! 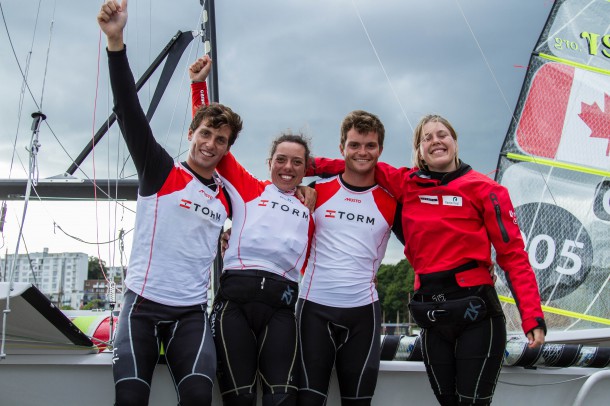 With only 30 minutes left until the racing deadline, the 49er fleet was ready to compete for what was a very close championship.  The wind built but was still unstable.  The RC could try for 2 races of the three.  Botin and Turrado (ESP) came off the pin end and dominated the fleet on the first upwind, ripping around the windward mark while the local favorites, the Lubeck brothers (DEN) were stuck in a lull on the opposite side of the course.  Then the wind became even more patchy, and ultimately the race was abandoned, ending the day for all.

It was a fantastic championship crowning worthy champions in Paya & Del Arco (ESP) in the 49er and Nielsen & Olsen (DEN).  We are all looking forward to many happy returns to Aarhus!  Del Arco was emotional after the win, “It’s been a really tough season for us, we had issues in Palma, so to come through with the win at this important even means a lot!” 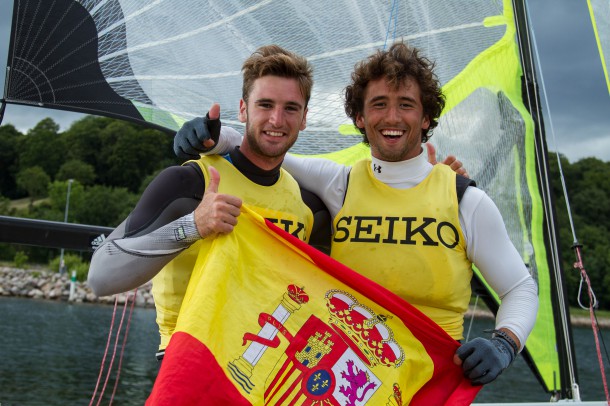 Next up for the 49er circuit is the 2014 Seiko 49er & 49erFX European Championship from Helsinki, Finland from July 8-13.   Don’t forget to watch our live broadcast finals on July 13th, and if you like reminders, sign up for our mailing list and we’ll send you a note on the day.