After two days of shifty winds, the fleet reported the most challenging day yet in Aarhus.  Both race committees did their best to move away from shore, but it was not enough to mollify the breeze completely.  It was left to the best U24 skiff sailors in the world to see who could sort through the conditions.

A common theme the sailors were discussing was balancing strategies, something that sailors always aspire to but that is often difficult to accomplish.  We heard from Nielsen & Olsen (DEN) that it was important when to take risks and when to be conservative.  We heard from Paya & Del Arco (ESP) that it was important to be patient rather than aggressive.  We heard from Payne & Orton (GBR) that they were balancing favoring the shifts versus the puffs.  And we heard from Turner & Brake (AUS) that they were prioritizing starting in a place that gave them options up the beat.  With all that balancing, and keeping a skiff upright, it’s no wonder the teams were tired after 3 races.  Catch all the interviews.

The format this week has all fleets completing 9 races for all teams so far.  On the final day, day 4, the fleets will race normally for 2 more races at 10:00, and then both Gold Fleets will come back to shore and sort out any protests.  At 14:00 local time, the top 10 49erFX teams will race 3 theatre style races, and will be followed by the top 10 49er teams at 15:00 for their three races.

At the top of the 49er standing, Paya & Del Arco stand alone in that they have been the only team able to be consistent over the past 2 days with the seemingly random shifts.  A coach from a rival team commented that the only thing he can notice is that they seem to find the first pressure off the start line and have the option to use it.  A difficult and valueable skill.

The local Danes, the Lubeck brothers find themselves in a great position.  In second place overall now, it would mean a lot to their campaign to stay on the podium.  As Danish 49er sailors, there are high expectation to live up to, and this event could be the place marker to set them up for years to come.

The final day will see many teams making a final push to stay in the top 10.  Full results 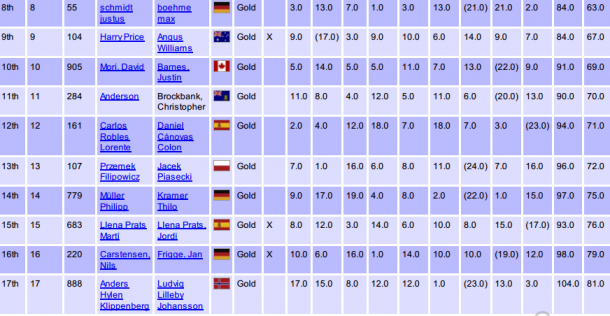 These are the 10 teams in play for the final 3 spots in the 49er class.  As you can see, teams in this group are regularly finishing in either top 3 or bottom 3 in races, so it really is up to a couple of these teams to put a pair of good races together and punch their ticket to the finals.  They are all capable, who will rise to the challenge?

In the 49erFX Nielsen & Olsen have the chance to wrap this regatta up before the final with a couple good races.  They have a chasing pack of 4 that are right behind them if they slip up, and the fight between those 4 for the final 2 spots on the podium will be fierce!  In the fight to make the medal race series (top 10) there is some complication.  The top 10 however, is female only, so teams 666 and 999 tomorrow will not be eligible.  That meanes will see a few more all female teams getting the chance to race in the finals. 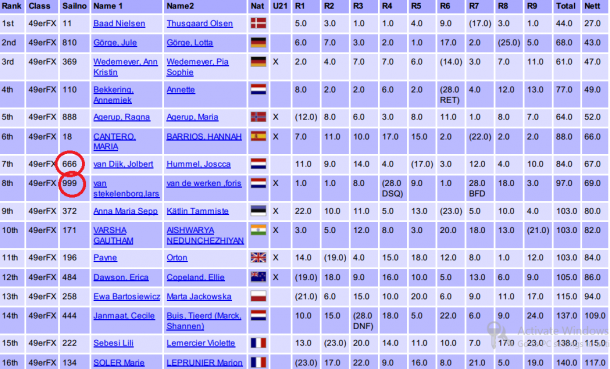 There is lots to play for as we head into the final day of the 2014 Junior World Championship.  Follow of fb.com/49ersailing as we’ll publish the ‘as live’ broadcasts immediately following each race.  We will have the drone flying through the theatre races as well tomorrow.