It was a glorious day in the province of Toulon on the South coast of France, sunny, blue skies, and fifteen knots of wind in the afternoon.  The 49erFX raced first in the 49er race area in a single fleet of 42 boats while the 49er class waited for the afternoon and raced in split fleets of 40 boats each.  The 49er course area was left favoured most of the day, so teams sailing on that course had to start well and hold their lanes to get to the left side.  The other course area used was the RSX area after they had finished and it was a little bit shiftier and teams could recover from outside the front row.  Sailors faced 10-14 knot winds with a fair bit of chop on this first day of racing.

After day 1 of qualifying for the ISAF Sailing World Cup – Hyeres, it is all the same at the top of the leader board.  Both Martine Grael & Kahena Kunze (BRA) and Peter Burling & Blair Tuke (NZL) are leading after day 1 of qualifying, not missing a beat after each winning the World Cup 2 weeks ago in Palma.  Both foreign teams, not able to go home in between the events took extensive time away from their boats in between the regattas.  The Brazilians toured Italy while the Kiwi’s logged masses of miles on their bicycles in Palma.  Apparently, the e breaks paid off!

For Peter Burling and Blair Tuke (NZL) it could have been an even better day than their 14, 1, 1 score line as in the first race they won the pin and headed left.  It was only once they were over layline that they realized they were heading to a mark of a different course, not the actual windward mark.  They scrambled back to round almost in last and then played catch up through the rest of the race.  The 2nd and 3rd races of the day were more straight forward for them.  Using decent starts and good speed upwind, they went wire to wire in one and had 1 boat to pass in the final race.

Local favourites, Manu Dyen and Stephane Cristidis (FRA) had a solid day with a 4, 4, 9 after a disappointing Palma World Cup where they were in Silver fleet.  They ended up withdrawing from the final day in Palma, with Stephane not feeling 100%, but they are recovered and ambitious for a good result.  They observed, “there were a number of young teams, the Spanish and Italians for example, who are sailing really well right now.  The 49er is a boat you can sail at the highest level from 20 years of age till almost 40.”  Indeed, that was the observation from the podium at the 2013 Seiko Worlds when Marcus Hansen and Josh Porebski (NZL) were one of the youngest teams in the fleet and placing 2nd, where as Manu Dyen, himself a 3 time Olympian, is one of the oldest in the fleet and placed 3rd.

The fleet has one more day of qualifying before the top 25 teams are selected for Gold feet racing. 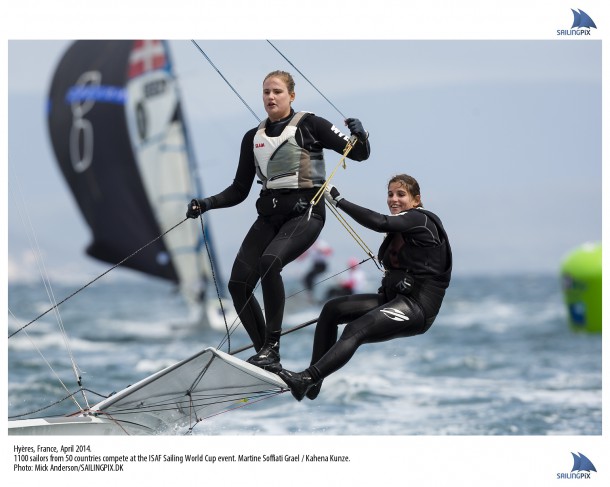 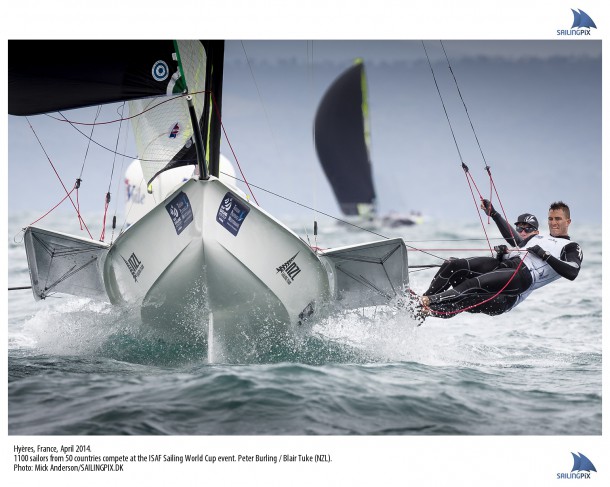 Both the 49er and 49erFX will compete in beautiful Hyeres.  Hyeres offers 2 very different conditions.  It is most often either sunny with light winds or blowing a gale called the mistral.  Every year this competition attracts the best sailors for the final world cup in Europe ahead of the Championship season.