Final Results PDF
Back to overview

Six races were held in the medal race area right in front of Flamenco beach on day 3 of the Intergalactic championships in Rio.  The day was almost more notable, however as the associated press stopped by in the morning with almost a dozen reporters and organizers who were staging a protest regarding the water pollution challenges in Rio.  The group MeuRio (my Rio) have distributed teams that work on a variety of social and planning issues that face Rio, a population of 16 million people without a planning department.  They spoke with sailors about the conditions in Rio’s waters and how they compare to the rest of the world.  In support, the entire fleet wore green shirts in support of the cause. 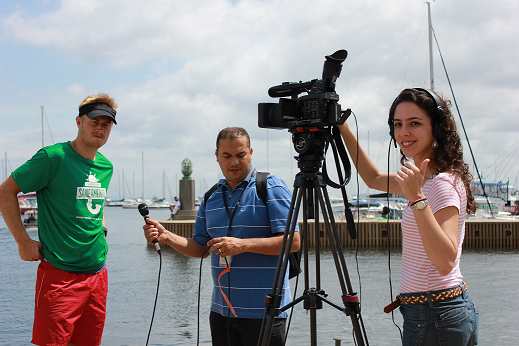 Having the best day in the 49er were Dylan Fletch and Alain Sign of the British Sailing Team.  The day was well suited to those who could start well and hold their lanes.  The left side was the most consistent and starting toward the pin allowed teams to get into favorable current first and pinch off teams on their windard hip.  Later in the day the wind became less stable, lighter and there were more routes up the course that could work out, but Alan Norregaard guessed that “winning the pin and holding to the left could have won every race today”… not that he did so.

Allan and crew Anders Thomsen did sail well enough to climb up the standings as well as the Brits.  Also sailing at a consistent high level were Dave Evans and Ed Pows having the second best day. The Austrians tumbled a bit, literally at one stage when Nico Delle Karth mistimed his tack and fell head over heals out the boat to applause from some of this competitors.  They did not loose too much though and maintain an almost insurmountable lead.

Nothing is quite so certain in the 49erFX fleet.  Three teams could still win, with the two British teams best placed going into the final day.  Charlotte Dobson and Sophie Ainsworth will maintain their leaders jerseys for the final day, but are only 3 points ahead of team mates Frances Peters and Nicola Groves.

Thomas Lowebeer, the President of the South American 49er Fleet may have some influence, however, over how the final day plays out.  The sailing instructions state that the format is up to the sailors to debate, and some of the teams are pushing for all double point medal races tomorrow.  With the Nico’s stuck on the far side of the bay and unable to make their case, who knows what will happen.  About the only thing this fleet knows right now is that an invite to a Samba party has been extended and everyone is getting their dancing shoes on!

This is the first Intergalactic Championship of Rio and is the brainchild of Brazilian sail Thomas Lowbeer.  Thomas is the South American president and organized a number of foreign teams who wanted to spend time in Rio to come in December and have a regatta.

The 4 day regatta should be a fun one with so many top 10 teams all chasing the Olympic dream!