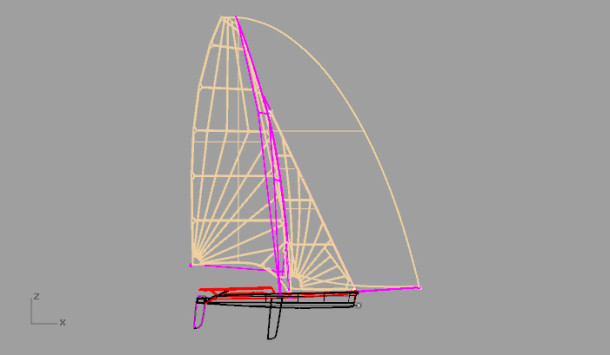 Designed by Julian Bethwaite, the 49er is an evolution of the International 14’s and Aussie 18’s. The hump-less drag curve has been refined and works better on the 49er than on the 18’s due to its length/weight ratios. The boat has very fine lines forward – meaning that the slap and thud that is normally associated with going to windward at speed is removed.

The 49er is controllable over 20 knots and benefits from easy handling, even in the most highly competitive races and tough conditions.

Bethwaite made several changes to the evolution of high performance sailing.

1. Replaced the spinnaker pole with an asymmetrical spinnaker system which comes straight out of the bow of the boat facilitating higher speeds and greater ease at flying it.

2. Built a gust response system into the rig. The deflection of the mast progressively from the top downwards due to the increase in the wind speed causes the sail to flatten, reducing the sail force.

The forward V is designed to ensure that bow does not pound and remains directionally stable while moving upwind at 9-10 knots. It is however full enough to give sufficient life/lift in waves and manoeuvres.

The forward chine/rail turns a substantial amount of water back downward and in that process makes the boat drier, gives additional dynamic lift and maintains sufficient reserve forward buoyancy to stave-off all but the most extreme nosedive.

The mid sections have good immersion curves and sufficient buoyancy to stop the boat developing a sinking feeling as it comes off the plane The removal of the chine in this area allows effective roll tacking without a large increase in drag.

The aft sections are the result of six years of research and development. On completion, they underwent a number of tow tests to ensure removal of any Reynolds number errors.

The design of the 49er achieves an outstanding harmony of visual appeal, physical parts and dynamic ratios to achieve a miniaturized design of a new level of efficiency.

The drag of the 49er shape and assembled parts is far lower than that of any previous skiff.  This is due to both hydrodynamic (shape of the wet part of the hull) and aerodynamic (the hull is lower) features.  Also, the hull has no vertical or external bulkhead.

The Wings are small and slender, blending smoothly into the hull with no bulky tube outlines or plug-in points.  They are also low – well below the meter height above the water where the wind speed is slower because it is slowed by surface friction with the water

The 49er s final ratios are also impressive. The 49er is a miniaturized and simplified design and yet it has achieved the superb performance level only recently achieved by the Grand Prix Eighteen footers. However, the 49er is affordable and easy to sail and is so efficient that it needs only 85% of the Eighteens relative power to achieve the same speed.

The following example compares the 49er with the modern Eighteen plus crews.

The vang takes the form of a “ram vang” which pushes the boom down from above, rather than pulling it down from below. There are three reasons for this:The rig is a further development of the Eighteen foot skiff rigs. The FRP topmast is relatively longer and the alloy lower mast is shorter, and some astute geometry in the primary shroud/forestay area has been added to fine-tune the way the forestay is kept taut when the mast bends.

It is a safer system, in that it holds the mid-mast forward and so prevents mast failure from inversion if or when a flogging spinnaker snaps the masthead forward.

It opens up the forward cockpit so that the forward hand can move quickly and without obstruction from side to side as needed.

It enables the mainsail working area to be carried down to deck level. There is and astonishing reduction in drag of the design due to this and other innovations.

Foils are also state of the art

Wings have a very long history, with the first set being tried in Perth by Richard Court on an Eighteen called Parry’s.

There have been experiences with “racks”, alloy frames that required a gymnast to use them, and then there was the blow out to 33ft spans, as well as all the history with the B14, the B18. .

At some point in time someone was smart enough to fill them in, initially with Chick-a-pee and latterly with netting. This was such a monumental break through that it is now common place in the skiffs.

With the approximately 30 different combinations of wings were tried.

The initial wings were simple tubes within tubes, but after the experience of the B14 with fatigue and sand binding after a couple of years use it was decided to go to a commercial nylon bearing self cleaning track. Once that decision became obvious the wing ceased to be a tack-on and has become incorporated into the boat.

The deck or cockpit of the is not just the space between the gunwales but extends to the edges of the wings, and it is possible to move freely from one wing tip (regardless of wing position) to the other without fear of falling down a hole, and in short it has become very user friendly.

The wings can also go through the water with out much fuss and should you “burp at the oyster party” and capsize then they are great to stand on and allow slow and controlled “Russian Rolls” to get the boat back up easily.

In a boat that is not highly stressed, such as a Tasar, the amount of fibre that is available because it needs to cater to abrasion resistance and idiot factor is excessive, relative to the loads that are subjected to it, and there is no need to resort to “exotics”.

The reason for using epoxy and woven cloth laminates is as follows:

Epoxy cross-links to a far greater extent than polyester or vinylester, so that it is load bearing in itself, and the resultant matrix is far tougher, with a longer life.

Epoxy is impervious to water, all the included solids react with all the other solids so there is no styrene to “burn off” and no catalyst to vaporise and therefore no holes left to fill with water.

There is no chop strand matt used so there is less wicking, all the fibres are load bearing and are oriented to take the appropriate loads and will continue to do it for a very long period of time.

The use of epoxy also allows very long cure periods which in turn allows more processing to be done in one application, reducing time and cost as well as allowing a better product to be produced.

In terms of laminate weight, an Eighteen, which carries far greater loads and now lasts for 4-5 years competitive life, has about 200g per sq meter structural laminate. The 49er, which carries about half the peak load of an Eighteen, has close to double that laminate, around 410g per sq meter. The 49er has substantial additional carbon mast bands and uses carbon and other exotics in the appropriate areas.

The boat is fully cored with impervious ridged PVC foam varying in thickness from 5-8mm and a full glass epoxy space frame to handle all those loads. It all adds up to a hull that will have a long competitive life.

There are a couple of points that need to be made here. Because there is no surface tissue or  oz CSM (chopped strand mat) in the laminate, what is called “print through” may be seen in the surface. This is the sign of a well-built boat because the gelcoat has been kept to a minimum and the gelcoat is shrinking around the glass fibres.

Normally it is very slight, and is in no way detrimental, and if it really concerns you then wait about 2-3 months for the gelcoat to fully cure and settle then give it a light sand and buff.

A dark brown liquid may come out of the bung when the boat is new and the reason for this is that glass fibre, carbon in particular, and all epoxy resins are hygroscopic, that is they like water. As the epoxy reaction goes through to completion that water is expelled and takes some free reactives with it. This is what is coming out and it will stop when the cure is complete.

A full epoxy cure will happen at 20oC in about 3-4 weeks, 7 days at 25oC and it can be much longer at lower temperatures. All s are “post cured”, that is they are initially cooked at a moderate temperature, cooled, then heated again for a longer period of time so as to achieve the best practical cure within the available time frame.