Over four Olympic cycles (2000, 2004, 2008, 2012) where you can view the results here. The 49er evolved into a finely tuned boat that is nicely balanced in all conditions with a rig that is able to be adjusted for best performance in each windspeed and sea state.

The FX has the benefit of this evolution as well as new developments in skiff rig design to achieve a great set up very quickly.

Starting with the 49er hull, wings, and foils, the goal was all about designing a rig that would go straight into the existing 49er boats and provide the correct amount of power for the lighter crew target weight specified by World Sailing.

The sailplan was designed to produce the correct amount of power for a 120kg crew so that they would be fully powered up at a similar windspeed as the men in the 49er, and start depowering at a the same windspeed. 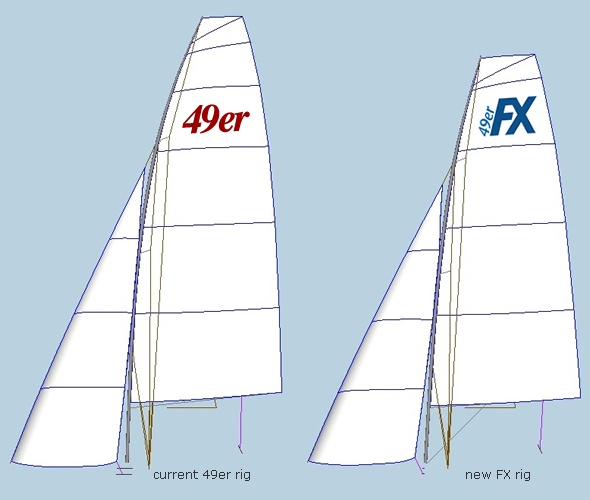 The size of the main and jib were adjusted to get the correct fore/aft aerodynamic centre of effort to retain the same balance as the 49er.

A more efficient main was introduced with a wider head as a result of recent 18ft skiff and America’s Cup technology. To make this head work a stiffer mast is required. This was achieved by raising the hounds- again like the top 18ft skiff teams-and adding a little carbon to the middle section of the mast to ensure the mid leech stays under control throughout the wind range.

The main was designed with only 5 battens to reduce the rig weight while using rugged purpose designed skiff cloth to ensure the sails last well.

Since the 49er was first introduced, gennaker designs have evolved to become flatter for high speed skiffs and multihulls. The new FX gennaker was based on recent top skiff designs to produce a very efficient sail that allows the smaller rigged FX to compete equally with the 49er downwind in most conditions.

Upwind the new FX sailplan is also able to compete with the 49er in many conditions with the rig settings being adjusted through the range in the same fashion to the 49er to get optimum performance in all wind strengths.

The shorter, lower aspect ratio sailplan has lowered the centre of effort making the boat easier to sail- and easier to right from a capsize while enhancing the overall performance of the boat!

If you want to follow along with all the action from the worlds best 49erFX sailors, sign up to keep in touch!

Advanatages of the FX

The opportunity to share equipment, coaching, transport and regatta costs between the men and women skiff teams will reduce campaign costs.

It is easy to run joint training and racing with both the 49er and 49erFX. There is very little difference in performance between the 2 boats.

The FX will have popular support from weekend warrior and youth sailors who find the 49er too much of a handful. FX fleets will be large. Quality racing will be found closer to home.

The FX is a true high performance skiff. It demands athleticism, balance, skill and daring. The FX is a skiff that will show to the world how spectacular our sport is and what amazing athletes our women sailors are.

Our top women sailors want a skiff that is thrilling in 10 knots and still racing in 25 knots. This is the FX.

Media and spectators already love the 49erFX. The women’s skiff event in the 49erFX has the potential to be one of the glamour events of the entire Olympics.

Mackay Boats developed the new FX rig for the 49er. After 9 months of testing by the Mackay team the boat was taken to Santander (ESP) and trialed againt 5 other boats by the ISAF evaluation committee.

The boat was finally selected at the ISAF mid-year conderence in early May and will be used for the 2016 Olympics in Brazil.  Further refinements were made over many hours of 2 boats testing.

Details have been fine tuned things like jib battens, sail corner reinforcement, jib sheeting angles and establishing base rig settings in a range of conditions. The results from this have been included in the sails which are made by North Sails in Sri Lanka.

The sails are built from the same cloth as the 49er. Gennakers are being offered in Black, Dark Blue, Red, White, Pink and Light blue

Sailing versus the 49er

A key feature is how much the 49erFX rig depowers. It’s very cool to watch it in action in 20-25 knots! You can see this in action on our heavy air YouTube clip.

Another big positive is the downwind performance.  In the 49er you get to the point where you bear away so much that the spinnaker begins to collapse from the back. This does not happen in the FX. The spinnaker is much flatter and flies further off the boat. The girls at 125kg can push it hard in 25 knots and were slightly faster than the guys. The dynamics of the rig are such that the bow lifts a lot more than the 49er and it’s much harder to nosedive. They can send it through the waves with much more confidence. The guys commented that the FX is much easier to bear away than the 49er.

The FX class rules stipulate that the hull, wings, foils, boom and pole must be 49er class parts.

The new carbon FX mast is made by Southern Spars in Sri Lanka.

The top and bottom tubes are about 450mm shorter than the 49er mast tubes.

The spreaders are the same as the 49er and can be used on either boat.

All of the mast fittings are the same on the 49er and FX, so spare parts can be used for either boat.

The Sails are made by North Sails in Sri Lanka.

North Sails and Southern Spars are in the same industrial zone near Colombo and both share the same logistics team. This means that the mast and sails can be shipped together to save costs.