After a dramatic penultimate day that saw boats launching and crashing in bursts of spray, the medal races Sunday were a 180 from Saturday where racing was cancelled early. The 2022 European Champions were crowned in the 49er and 49erFX after the Bay of Aarhus dished out subtle but game changing shifts and puffs that wound up determining podium.

Double Olympic gold medalists Grael/Kunze (BRA) slid into first Saturday after a slow but deliberate climb to the top that saw them picking their way through the fleet each race of the series. Not always the fastest, but often the most calculated, the pair didn’t risk a close start in the Medal Race and headed back to the line with Americans Roble/Shea as the rest of the 10-boat fleet, each team from a different country, marched out to a dominant left hand shift in the flat seas and six to eight-knot winds. Last for most of the race, the Brazilians did just enough to get around two boats, finishing eighth, and winning the championship by six points.

Current world champions van Aanholt/Duetz (NED) had a chance earlier in the race to keep their upward march going towards first, but several fickle shifts didn’t go their way and they settled for silver. Bobeck/Netzler (SWE) who lead the fleet for the majority of the event held onto third by winning the Medal Race.

Still one of the strongest teams in the 49er fleet after their win the Oman worlds last fall, Lambriex/van de Werken (NED) were feeling relaxed going into the final day with the lead. But a 25th in the last race, their throwout, shook the Dutch and a sixth in the Medal Race sealed their second place, allowing Botin/Trittel Paul (ESP) to claim their second European Championship title, their first being in 2018 in Gdynia, Poland.

Peters/Sterritt (GBR) did just about all they could to grab second with their second place in the Medal Race but ended up just one point behind the Dutch in third.

Sailing Aarhus and the city defined by it’s seat on the sea was a spectacular back drop to the championship and though places changed multiple times in each of the three Medal Races, the winners were no surprise. “There’s usually little change at the top,” said 49FX sailor Jo Aleh of New Zealand who was guest commentator during the medal races. With two Olympic medals in the Women’s 470, Aleh should know. “They’ve been sailing so well all week, they can match any condition they get.”

Life in the Passing Lane for Gold Fleet Standouts 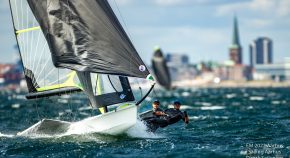