Top 49er and 49erFX Teams Tested in the Palma Theatre

The theatre style finish to the World Cup of Sailing in Palma produced spectacular racing.  There was a 10 knot breeze and modest chop to start the day that built to 18 knots by the last races of the 49er fleet.  The schedule called for 4 theatre races for the top 8 49erFX teams followed by the same for the 49er fleet.

The scoreboard looked a little different from how sailing fans might be used to seeing it as ISAF is testing scoring options and formats during the 2013 race season.  Here is a look at the scoreboards for both the 49erFX and 49er Fleets.  For those keeping track at home, the points these teams would have been on are calculated for both the classic scoring system the 49er class has used for the past 8 or so years as well as a new scoring option called ´elimination scoring´ where only the results of those boats still remaining in the competition are used to recalculate all of the race scores through the week. 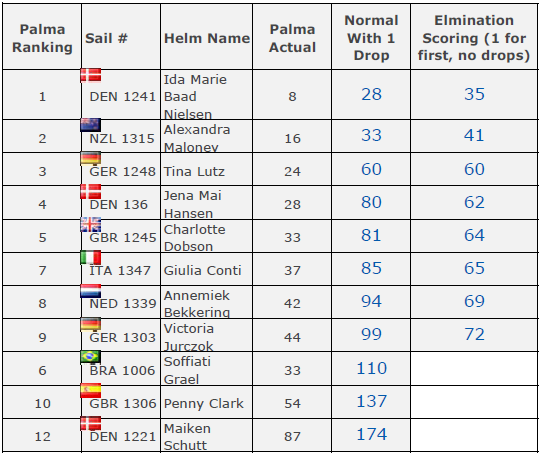 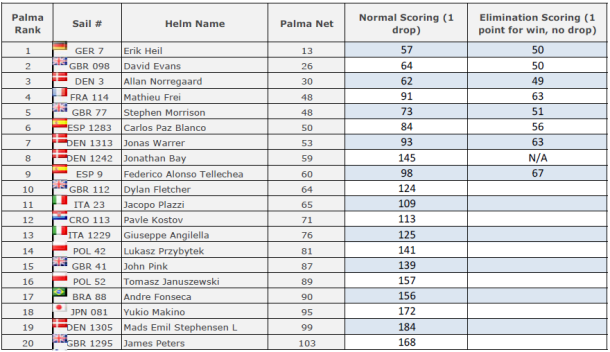 One of the features of the Theatre Style racing is that it is quite easy to follow and film the entire race course from the sidelines.  Each race of the day is available in full length on youtube for those who wish to watch the day unfold as the live audience did.  For those looking for a summary of what happened, please jump down this article to the bottom.

Neither of the 49er fleet and the 49erFX fleet was particularly close on points going into the final day.  There were some places that could change, but there was a very limited amount of movement that was mathematically possible.  The absolute maximum is a 28 point movement as if a team wins every race and another team is last in every race, there would be a 28 point gap between them.  Another 4 points are possible if a team does not finish the races or is disqualified for some reason.

The limited passing opportunities did not have a big impact on how hard the teams appeared to be racing, though in some cases it may have effected their preparation the night before.  With Theatre Racing new to the 49er class, most teams gave 100% effort in the hopes of learning about the new style of racing.

In the 49erFX fleet, a few things that were apparent through the week became even more obvious.  The first is that the Danish team of Ida Nielseb and Marie Olsen were unstoppable.  They dominated the week and then also proceeded to dominate the theatre style final.  They won 3 of the races and came 2nd in the final race.  They also came to those finishes in a variety of ways, sometimes leading the whole way, other times making come back.  The one consistent feature what their calm approach to tactical situations, their fantastic boat handling, and their solid boat speed.

Boat handling and fitness are highly interlinked in a 49er.  The teams who are able to keep the boat stable through maneuvers and in a straight line also expend far less energy chasing the boat and recovering from small or large upsets.  More than any other observation from the theatre racing, this one proved itself out over the 4 race series.  Both the Danish winners and Kiwi silver medalists, Alex Maloney and Molly Meech, were a step ahead of the other teams with regard to their boathandling skills.  In the later races, as other teams had to recover from energy sapping bobbles, incidents, and capsizes, these two teams got stronger and were able to move into the top 2 positions consistently. 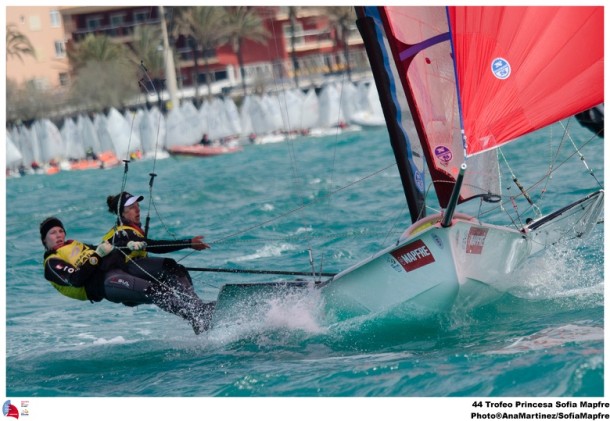 Close on their heels were another Danish team of Jena Hansen and Katja Iversen.  They also had very solid boathandling, but fought a persistent issue with their spinnaker retrieval system through the final couple of races which cost them somewhat on their path toward the Bronze medals.

Overall, the 49erFX fleet did very well in racing this new format and provided some thrilling moments throughout the day.

As the 49er fleet waited on shore for the 49erFX final to be completed, the wind built to a picture perfect 15 knots and modest chop.  There was a chilly sting in the air as well – Palma was unusually cold on this final day.  The snow capped mountains in the background were testament to the somewhat unusual temperatures.  Fortunately for the 49er teams having 4 races with 3 laps each and only a 10 minute target time meant that the teams stayed so active they would have hardly noticed.

The racing was a spirited affair, with any of the teams participating able to claim a race victory.  In the end, however, no team came close to closing the 13 point lead Erik Heil and Thomas Plossel were able to build from their fantastic gold fleet performance that featured 4 race wins from 6 races.  They sailed really well in the Theatre Style finals and claimed the mathematical victory with 2 races to spare.  They completed all 4 races, and raced well before treating the media to a double treat after the final race 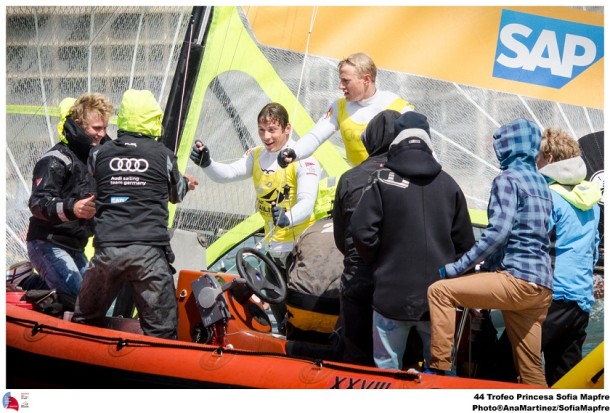 The battle for the silver medal was a close one, with Team GBR´s Dave Evans and Ed Pows only marginally ahead of 2012 Olympic Bronze medalist Allan Norreggaard and new crew Alders Thomspen.  By the third race of the day the two teams were tied on points.  The brits had lousy luck all day and while getting into good positions through the day were never able close out a top finish.  Allan was 3 points up going into the final race and after a brief engagement with the brits (which was missed due to a lack of camera battery capacity) in the final race was able to secure the silver.

For those who have watched the 49er races above, one aspect of the racing that was not quite ´right´ was how the downwinds played out.  Fans will notice a large number of boats overstanding the leeward marks forcing some very difficult boathandling and often recoveries to re-round.  The geography of the race course was not quite correct, and as the left shifting puffs rolled in, teams were able to sail so low that they never encountered the lane boundary.  That allowed teams rounding behind the ability to sail a low course and block the leading team from gybing where they normally would.  While this did create passing opportunities in the races, 49er race officials will strive in the future to ensure the lane boundary is engaged on straight sets by either shifting the boundary itself or moving the top mark closer to the left hand boundary.  That should provide some options for leading boats to ´save´ themselves from being passed.

From a purely racing perspective, the 49ers delivered wonderfully in races 2, 3, and 4.  There were many passes, spectacular downwinds, and thundering capsizes.  Even though the scores were not that close, other than with the battle for 2nd place, the races were entertaining in themselves.

It is easy to imagine how a professional camera crew will be able to capture the action and convey a fantastic story to sailing fans in the near future.  That chance is coming up soon, as the 49er class European championships will have the final 3 days live broadcast on Danish TV and live-steamed to the internet.  The dates for those broadcasts are July 5-7, 2013, and all the action and details will be available at 49er.org.  Many thanks in advance go to our corporate sponsors, Seiko and SAP for making the broadcast possible.