The final day of the 2013 North American Championships was another light day for the teams competing.  With the whole regatta up for grabs, teams were tested in patience, concentration, and their light air skills.

Using the ´First to 10´ format of Theatre Style racing, the day began with the Qualifying Finals.  49er teams placed 8th to 15th had the chance to qualifying for the 8th spot in the Finals.  Unfortunately, after a morning of waiting the wind did not cooperate and the 8th placed team, Ryan Pesch and Trevor Burd, took the spot, based on being the top ranked prior to the day.

The women´s fleet got under way with Erin Berry, 3rd overall going into the day, winning the first race, which put her into contention for the championship.  The leader, Martine Grael was second so she was on 8 points after the first race and poised to take the overall win.  In some last minute action, Giulia Conti fell out of the points and dropped to 5th in the race leaving her with only her qualifying points of 4. 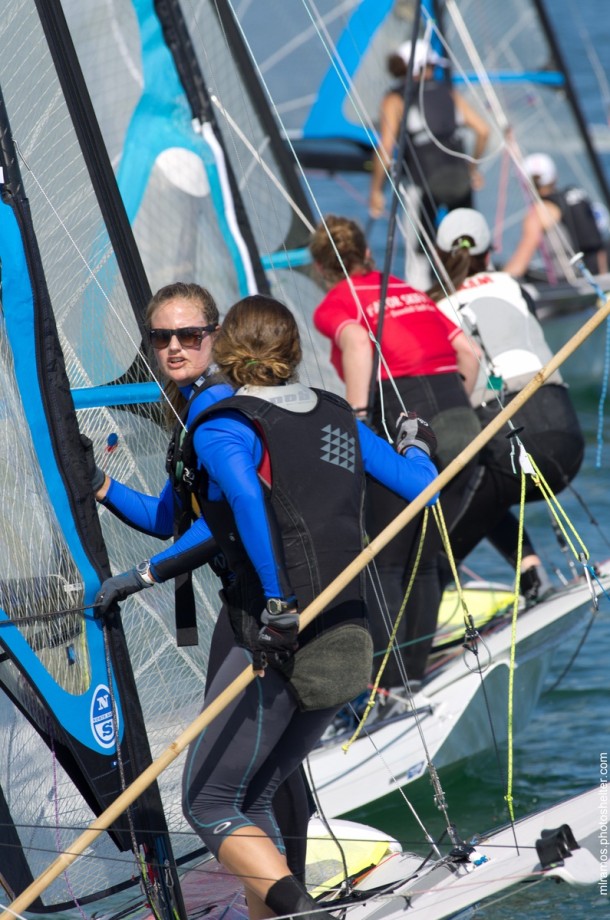 The second race was a real challenge, as crews struggled to make any headway in the dying wind throughout the entire race.  Guilia Conti got a fantastic start and never looked back taking the victory.    She added the 4 victory points to her 4 fleet points putting her on 8 total.  Farther back in the fleet, both Martine and Erin Berry struggled initially and worked their way up the pack.  Ultimately, Martine Grael claimed the championship by placing second in the race giving her 11 points overall and being the first to 10 point.  Erin was third putting her on 9 points, and only 1 away from claiming the Silver.

In the final theatre style race for 49erFX, Berry and Conti battled it out for the Silver medal.  In the pre start they were both over the line and to return to restart.  Kristen Lane had a beautiful start and was off to the win from there.  Throughout the race they battled each other, and in the end, Guilia Conti pulled off a second place finish to claim the Silver, while Erin Berry finished in 4th to claim the Bronze.  Here is the result table. 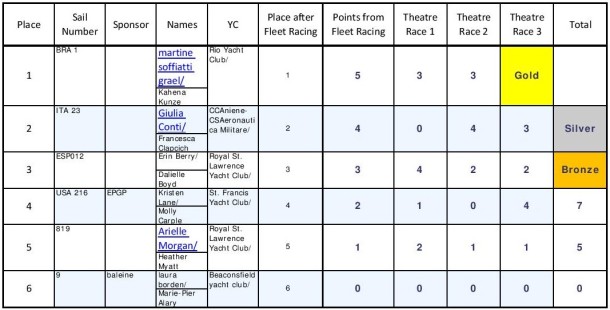 The men´s final was blessed with slightly more wind than the women had.  The first race was very competitive, with a number of teams arriving at the first mark at virtually the same time.  Our series leaders dove into the fray and were found to have fouled a team on the starboard layline.  They exonerated themselves with a 270 degree turn, but ultimately were held out of the points.

Fred Strammer had a good clean race from start to finish and took the win and put them in contention for the title.  Read what they had to say about the racing.

That race really closed the gap in the race for the championship.  There were three teams tied on 5 points and another two on 4 points going into the second race.

The second race saw the wind skew to the left just before the start vastly reducing the number of passing lanes available.   John Ladha got off the line cleanly with a good start on Port and took the race from there.  Brad Funk also sailed well in the race, crossing the finish in second only to find out he was over the line early.  That moved the Brazilian and Swedes up and also allowing each enough points to claim the title in the next race.

The third race was a cleaner one with the race course square once again.  Ryan Pesch got off to a great start and lead to the windward mark with John Ladha close behind.  In the battle for the overall win both the Brazilians and the Swedes rounded the first mark out of the points but within striking distance of the championship.

The Brazilians made some nice gains on the downwind to pass into a championship clinching position, one they held onto through the finish to win the 2013 North Americans.  The Swedes finished out of the points forcing another race to claim the Silver and Bronze medals.

In race 4, had the Swedes, Canada´s John Ladha, and the USA´s Tyler McDonald all vying for the Silver and Bronze medals.  The Swedes sailed a really nice race right up until the end.  In a last run battle, the USA´s Ryan Pesch had another good race and then a very tight finish sorted out the positions.  It was John Ladha squeeking through for the Silver medal and the Swedes falling back to finish with the Bronze.

Just before the race a motor boat broke through the starboard lane boundary, forcing the teams to adapt on the fly, something they all managed quite well. 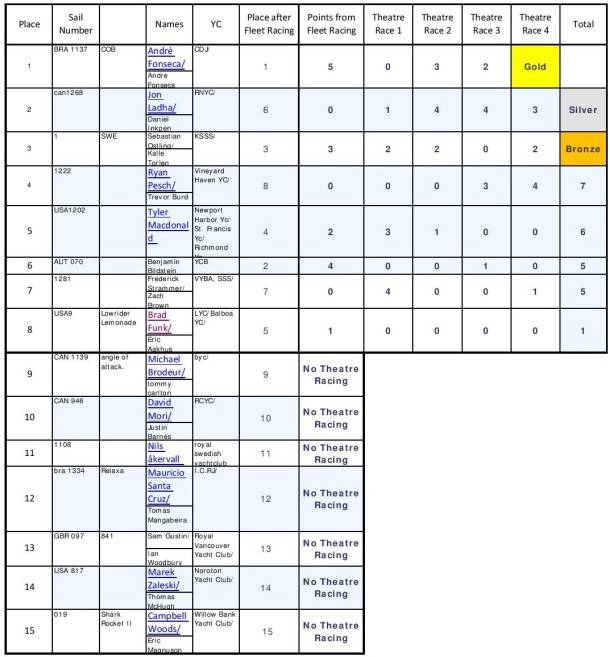 A very special thanks go out to the Coconut Grove Sailing Club for hosting the event and to PRO Ron Rostorfer for running the event.  Here are the result tables.  Here are some 49erFX sailing images, and also the 49er Images from the theatre style day.  Som great images from the awards ceremony with many thanks to Marylinda Ramos and her images are available for purchase!  Watch the awards with Seiko bling and Champagne spraying! 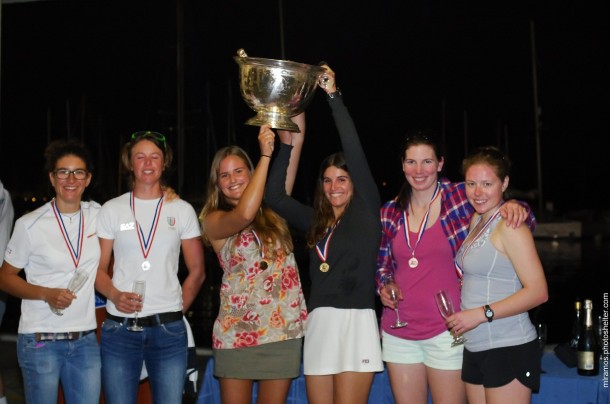