USA veteran finds her feet in the FX, and Austria 1 point ahead of Kiwi 49er legends

Day two of the 2019 Hyundai 49er, 49erFX and Nacra 17 World Championships brought solid breezes across all courses, still with plenty of wind shift and surprise to keep the 400-odd competitors on their toes. After being held ashore on day one due to too much breeze, today was the first opportunity for the 49erFX and Nacra 17 sailors to put some scores on the board. For the 49er Men, some clarity is beginning to emerge on the leaderboard as qualifying passes the halfway stage.

49erFX – some surprises at the top

On the other side, it has been a feature of the 49erFX fleet that the top guns stumble at least once carrying deep scores and setting up a high scoring championship in the women’s skiff. So far only two teams have scored top 10 finishes across all four races in the 49erFX and it is not a surprise to see Ida Nielsen with Marie Olsen (DEN) and Martine Grael with Kahena Kunze (BRA) showing consistent form so far. While Paris Henkin and Anna Tobias (USA) started their championship with a lowly 18th from their half of the qualifying draw, the Americans soon discovered their mojo, winning the next two heats and ending the day with a 5th. This places USA at the top of the scoreboard of a 49erFX World Championship for the first time in their careers. Denmark’s highly experienced team of Ida Marie Nielsen and Marie Olsen (DEN) kept all their scores in the top 10 and finished off the day with a race win. They’re tied on points with the Americans at the top of the scoreboard. There’s a three-way tie for third place, two of those teams being the arch rivals from Rio 2016 – the Olympic gold and silver medallists from Brazil and New Zealand respectively. However, placing ahead on countback ahead of Maloney/ Meech (NZL) and Grael/ Kunze (BRA) are the Singaporeans, Kimberley Lim/ Cecilia Low. Singapore won their third heat but finished the day with a 20th which they’re currently able to drop from their scores.

In the 49er Men, Austria’s Benjamin Bildstein and David Hussl have been knocking on the door of greatness for some time. Could Auckland be their week? Along with the Swiss team in fifth overall, the Austrians are the only crew to have kept all their qualifying race scores inside the top 10. Today’s stellar results of 1,5,2,2 launch Austria to the top of the rankings, a single point ahead of local heroes and reigning Olympic Champions, Peter Burling and Blair Tuke.

We have one last day of qualifying to come. Each fleet will have another four races and for many sailors still aiming to qualify for the Olympic games, it will be the most critical sailing day of their careers. Qualifying for the Olympics will almost certainly require making the cut for gold fleet at the end of tomorrow’s racing. Saving their best for tomorrow will be vital.

Anna (Tunnicliffe) Tobias has her best ever day in a 49erFX

The 2008 Laser Radial Gold medallist Anna (Tunnicliffe) Tobias now crews for 2016 Olympian Paris Henken (USA). The duo have not been full-time sailors on the circuit. Paris is still attending university and Anna is competing at the very highest levels in Crossfit. Over recent months they have been gearing up for this Championship and with two bullets and a fifth-place today they must be very pleased with how their US trials are beginning.

Anna has raced the 49erFX on and off since 2013. While she has had occasional success over the years, today’s results with Paris are a significant improvement and their best ever day in the 49erFX.

Kim and Lim (SIN) in pole position for Olympic qualifying

Singapore’s Kim and Lim are no stranger to performing well at World Championships, as both are Optimist World Champions. However, Singaporean sailors are well known for receiving great support and funding at youth level. Success at Olympic level has to come from the efforts of the sailors themselves and it’s rare to see the Singapore flag at the front of the Olympic fleet. So far so good for Kim and Lim; they won a race and had two more top 10s to sit third overnight making a great start toward earning one of the six qualifying spots for Tokyo.

Nacra 17 – the Battle of Britain

It has been a feature of the Nacra 17 fleet in Championships to date that the favourites rise to the challenge and begin the series strongly. None more so than the never-ending saga for British nomination to the Tokyo Olympics between Ben Saxton with Nicola Boniface and John Gimson with Anna Burnett. The two British teams fighting for the selection are lying first and second overall on the leaderboard, both with two dominant days to start the regatta. However there are four teams at the top, all within a point of each other. Along with the Brits are Riley Gibbs and Anna Weis (USA) in third overall, on the same points as Lin Cenholt and CP Lubeck (DEN). Best of the rest are the Italians, Vittorio Bissaro and Maelle Frascari in 5th overall. But those other Italians, the most dominant so far of this quad, Ruggero Tita and Caterina Banti find themselves back in 23rd overall.

To watch some race highlights from Day 2 of Nacra 17 racing, go to Nacra17.org below 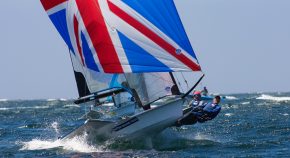 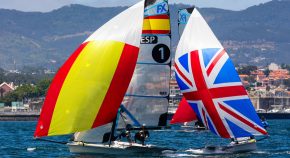 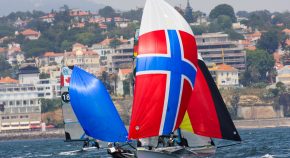 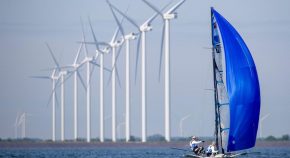