With very unstable wind conditions on the third day of the Europeans, three races were held for the 49er fleet, with the windward mark having to be changed in almost every race. The races of the 49er fleet were won by different teams each time. The 49erFX fleet, which completed four races today, saw the first Hungarian race win, with the fourth race winner being the Érdi-Korbuly team. More than 10 protests were lodged, so the results were not published until the protest hearings had ended at about 11PM. As the 49erFX fleet has finished 5 races total, their European Championship is valid as of today.

The racers of the 49er and 49erFX Junior European Championships took to the water on schedule, with no morning postponement this time.  On the Alfa course, where the 49er fleet was competing, the wind was blowing from 75 to 80 degrees with an average of 5.4 knots, but with serious holes. Therefore, the Course Race Officer Bence Kárpáti moved down to the south coast, where the second race of the European Championships started in a somewhat more stable wind from 60 degrees.

The race committee, in addition to changing the course to starboard at the end of the first lap, also extended the course in the freshening winds.

For the third race of the Europeans, the wind had shifted to 45 degrees. The 1,000 m course length proved to be sufficient, and at the end of the first lap, with the wind freshening to over 6.5 knots, the course “only” had to be changed to the left, to 30 degrees.

The fourth race had the wind shift further to the left and the axis was set at 5 degrees. The fleet started clean, with only one boat U-flagged. At the end of the first lap, however, the wind dropped suddenly under 4 knots, forcing the course to be reduced: by the second lap, the course was 280 metres shorter. The wind weakened further towards the finish and while the front of the fleet crossed the finish line in reasonable conditions, the back could only “really be carried by momentum”.

After the hard-finished 4th race, an intense search for the wind began, but after a while, the race committee called for a postponement and then decided to take the sailors to shore. During this period, the wind strength varied from 0 to 4 knots and the direction from 330 to 20 degrees.

“It was a challenging day, the fleet ended up racing in winds that were not forecast. Despite this, we were able to measure average winds of 6-8 knots in the morning, so there was no question that the racers would take to the water at the scheduled time. Based on the forecast, we expected a southerly wind during the day, so we set course towards the mid-water and even the south coast. During the races, the winds changed intensely, so we had to adjust the course length, the direction of the axis or both in each race. The race committee worked in a very coordinated way, so the changes went smoothly, and we managed to stay within 10 percent of the target time in every race” – summarized Bence Kárpáti, the Alfa course officer.

“In the last minutes of the starting procedures, the wind strength and direction stabilized for all races, allowing the fleet to start from a fair line. In the fourth race, the wind strength dropped noticeably, but we didn’t expect it to drop so quickly.”

The 49erFX fleet races followed a similar scenario. “We had changes in every race, at least once for the angle and once for the course. In the fourth race, we had to postpone the start because of a shift in the wind, after which we set the course to 5 degrees.”, said Berta Böröcz, Bravo course officer. “The team worked very well together, so the changes were made without any disruption.” After the 4th race the wind quickly dropped, so the race committee called for a postponement, and after 40 minutes the sailors headed for the harbour. The 4th race of the Europeans was won by HUN248, Vince Érdi and Sarolta Korbuly.

After about two hours on shore, the teams were back on the water, as the race area was experiencing winds of 6-8 knots again. By the start of the 49ers, the winds were down to 4.8-5.4 knots, and by the end of the first lap it was only 3.8-4.0. The race committee had radically shortened the axis, but by the end of the second lap the wind had dropped below 2 knots. The race was abandoned shortly before the leading boats crossed the finish line, and the racers were towed ashore.

However, the 49erFX course was able to finish the fifth race – albeit one leg shorter, as the race committee had the boats finish at the end of the second upwind leg. The race started at 195 degrees with an average wind of 6.5 knots, but it lightened into almost nothing by the end. The organizing team was able to set the course very quickly and start the race at the first possible time. This contributed significantly to the successful completion of the last race of the day.

Todays protest hearings ended after 11PM causing a fair number of changes to the overall results. The Italian boat that was leading the Europeans got DSQ-d from the last race, so the Spanish Pol Marsans Barcells – José Manuel Ruíz Ibánez team is on the first place right now. They said that while they mostly sail on sea, they are not entirely unfamiliar with lake racing. The circumstances were tricky at Lake Balaton, but they are happy with their overall standing. 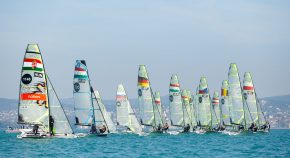