In a somewhat steady 6-8 knot north-easterly breeze,  James Peters and Fynn Sterritt (GBR) started in a tough lane, in a race where 7 of the 10 teams could win; pulled through their lane to take lead, and extended for the win!

In the 49erFX, Martine Grael and Kahena Kunze (BRA) had confirmed gold the day prior in the 49erFX, but Alex Maloney and Molly Meech (NZL) won the silver from a large pack of contenders.

James Peters and Fynn Sterritt, 2nd at the 2017 Worlds prior to a mostly missed season in 2018 due to an injury to Sterritt, were locked on 52 points with Poland’s Lukasz Przybytek and Pawel Kolodzinski, in front of Logan Dunning Beck and Oscar Gunn (NZL) on 56, with another four teams in mathematical contention for the win.

As the Brits thrived, the Kiwis and Polish team dropped to the back of the fleet, finishing eighth and tenth to claim silver and bronze respectively.

“We’re over the moon,” commented Sterritt. “It’s been an up and down week. Everything seemed to go our way in that race. We found our groove and were comfortable with our set-up. We were really calm and know we can win when we’re under pressure. We kept it controlled. James did an awesome job with the tricky decisions.”

For a brit to win a Test Event is traditionally incredibly important. Team GBR, under previous management, would keep their qualification system secret but it is widely known that success at the Olympic venue was one of the largest components to decide which teams would get to go to the Games. There is a new chief of Team GBR in Mark Robinson, so policies may not be the same as before, but for Peters/Sterritt to take the win while Fletcher/Bithell back in 11th could have knock on consequences.

Another continuing story illustrated by the regatta in Enoshima is the depth of the 49er fleet. 10 different nations were represented in the medal race. None of the medalists were repeat medalists from the recent worlds in Aarhus. There were a combined 13 nations competing in the medal races in Enoshima and Aarhus. These 13 nations exclude traditional 49er nations AUS, BEL, DEN, IRL, ITA, AND SWE… and… there are only 13 available at large berths for the 2020 Games in Tokyo. While the rewards of making it to the top of 49er almost always lead to the best pro jobs, just making it to the games has never been harder!

While Fletcher/Bithell & Peters/Sterritt are locked in the battle of Britain, another compelling battle could be shaping up. Logan Dunning Beck with Oscar Gunn (NZL) qualified New Zealand for the 2020 games in Aarhus. Immediately following their qualification, Burling and Tuke publically announced their campaign for Tokyo. LDB and OG reportedly considered quitting upon hearing the news. Instead, they refocused their efforts and that has turned into a Silver in Enoshima. Burling and Tuke have yet to announce their return date to competition, but if they aren’t right at the top of their game, they may not make Tokyo!

Martine Grael and Kahena Kunze (BRA) had gold wrapped up ahead of the Medal Race so they sailed without pressure, finishing fourth.

On their victory, Kunze commented, “This is the first time we’ve won by this amount and we’re really happy because it’s at the Olympic venue. We achieved our goal for this event. We felt some stress in Aarhus at the Worlds but we managed to synchronize as a team and, more than that, we’ve sailed well in these tricky winds in Enoshima.”

In the fight for silver, there were seven teams fighting it out for the silver and bronze. The race itself was compelling, with some very tricky conditions making a huge impact on the results. Dobson and Tidey had a great beat, getting the last shift up the beat to lead at the windward mark. They came from the right, and gybeset to get back onto the same shift. It did look a bit light as they did so, but it looked like all teams might follow, which would reduce the risk. However, the pack was too tight, and third placed Helene Naess with Marie Ronningen (NOR) straight set to avoid traffic, as did four more boats behind them.

The change in fortues was dramatic, with the five boats that straight set being the first five boats to the leeward gate. There were no more shifts in fortune as great as the first downwind, so it was up to kiwi’s Maloney and Meech to work their way up into second int he race, and therefore, second overall.

The Norwegians won the Medal Race but it was Sweden’s Klara Wester and Rebecca Netzler who grabbed the Bronze. 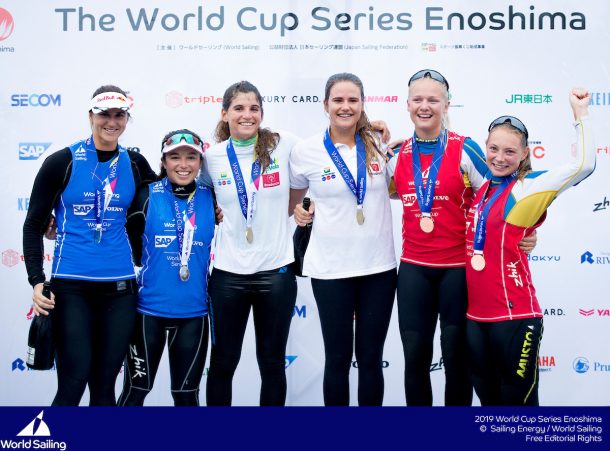 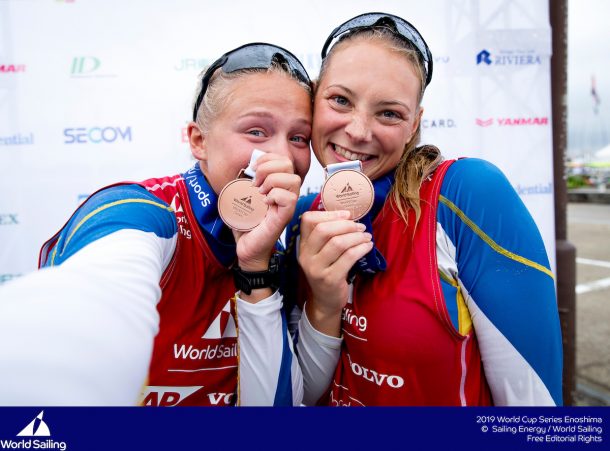