The Seiko 49er.ca Championships took place from August 21 to 25 in lovely Kingston, Ontario during the annual CORK Olympic Classes Regatta. In all, 22 races were held plus a medal race on the final afternoon. Competitors came from far and wide for this event, including Mexico, Seattle, Wisconsin and Edmonton. Three nations were represented with 20 teams competing for the Canadian championship.

The first day was cloudy with a Nor’Easter gradient breeze, making for tricky, shifty conditions. Canadian Sailing Team members Jon Ladha and Dan Inkpen of Newfoundland jumped out to an early lead over three of their team mates. Day 2 was much the same with Ladha and Inkpen continuing their dominance over the other 19 boats.

Monday, day 3, sailors were met with a honking Easterly breeze of 15 to 20 knots against the current, making for short, steep, dirty chop. That made for extremely tricky conditions and plenty of pitch poles and capsizes, even among the top sailors. Monday is when Billy Gooderham and Ian Hogan of Toronto made their move from the middle of the fleet, vaulting themselves into second place, posting only top 3 finishes on the day. Tuesday, the sun finally showed up, but still the fabled Kingston thermal breeze was nowhere to be seen. With light and shifty conditions, the quiet but pensive Olympian Gordon Cook and young-gun Paul Ehvert emerged from the pack, posting four bullets on six races to take the series lead.

Wearing the yellow bibs on Wednesday morning, Cook and Ehvert went out to extend their lead over Newfies Ladha and Inkpen in the blue jerseys. However, Ladha posted a bullet while Cook hit the weather mark and was shuffled back in the pack, dropping him into second. With jerseys exchanged and only three points separating them, the top ten teams went back out for the medal race, just off the pier at Portsmouth Olympic Harbour. It was a tight and well fought medal race, with Ladha and Inkpen working hard to battle former Olympian Cook. Ladha put a big gap between himself and the fleet to win the medal race and the series, earning Seiko watches, the newly minted Canadian trophy and two bottles of champagne. Gooderham and Hogan were able to hold on to the third position even after fouling a boat, spinning and dropping back in the fleet. — Tej Trevor Parekh   Full Results here 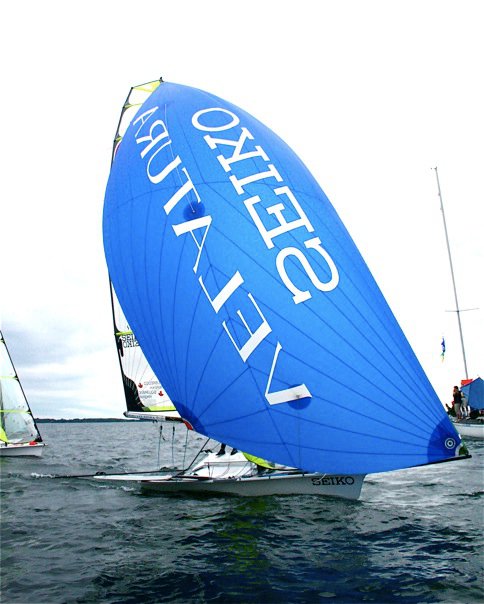