In absolute maximum wind conditions, the Canadian 49er team of Alex Heinzemann and Justin Barnes beat Americans, Andrew Mollerus and Ian MacDiarmid, to claim the North American Olympic berth. The two teams were separated by only 1 point after 12 races, meaning the medal race would decide the outcome in a who beats who scenario.

The race was in doubt as the wind speed was at absolute maximum for the fleet. All the teams capsized at some point in the race, and the Canadians crossed the finish line upside down as they capsized in their final gybe, but with the American’s held up in a long capsize from the first lap they still managed to secure their position.

Argentinians Yago and Klaus Lange won the race and moved up into the silver medal position. Brazilians, Marco Grael and Gabriel Borges had already secured the gold medal and the South American Olympic berth prior to the medal race, and finished securely in third.

The narrow qualification for Canada is vital in the overall scheme of Olympic qualification since the 49er fleet is by far the most difficult fleet to qualify for the games for of all ten classes right now. With only 19 berths in total, there will only be 3 spots available at the 2019 World Championship in Auckland with a huge number of world class teams and nations vying for those spots including recent regatta winners from Spain, Poland, Italy, and others. The American’s will have a tough task now to work back into the mix.

Canada last qualified for the games in 2012 and will have five young teams up their training to see who can win the Canadian nomination to their Olympic team.

The Nacra 17 fleet had a significantly easier time of the condition than the 49er fleet did, with the elevators providing much needed stability even in the tough conditions.

The big news overnight was that Uruguay’s Pablo Defasio and Dominique Knuppel won a redress hearing from race 11 of the series, dropping them 5.5 points less than the 10th they scored in that race, which mathematically secured them 4th overall and the South American continental berth. Had that not been the case, this medal race would have been a tight battle between the Uruguayan team who finish fifth overall.

There was one item left on the line for the race, as by winning Argentina’s Mateo Majdalani and Eugenia Bosco overtook Brazilians
Samuel Abrecht with Gabi Nicolino for the silver medal.

It was a very high quality regatta for the Nacra 17 fleet with 10 teams and close racing up and down the fleet. With both Argentina and Brazil having previously qualified at the 2018 Worlds in Aarhus it gave some extra light for the four other South American countries who have all been working well with each other in the Nacra 17.

There should be five more quota spots up for grabs at the next qualified, the 2019 Worlds in Auckland.

With conditions increasing all day, the race committee postponed the 49erFX medal race until tomorrow. There is almost no ability for any place changing to occur in any event, so it’s likely made no difference and the teams would likely be happier to call and end to proceedings and look forward to the Test Event that starts next week. 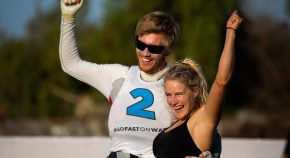 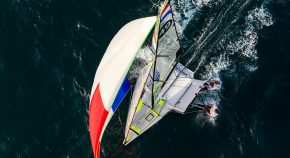 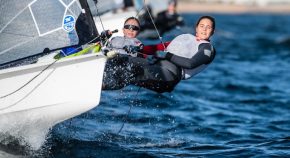 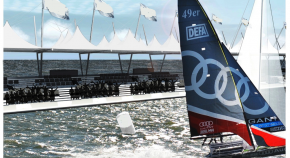