Nathan Outteridge has retained his world title with Iain Jensen as crew.  The duo sailed a conservative start in the medal race with a 5 point lead and confirmed their title by besting the fleet and finishing 2nd in the medal race.  The Sibello brothers slipped to 7th in the medal race while John Pink and Rick Peacock finished 3rd to moving them into 2nd overall and breaking the tie with the Sibellos.

OUTTERIDGE AND JENSEN MOVE INTO THE LEAD

{gallery}2009Worlds{/gallery} The first day of racing in the finals provided fickle windsand changing conditions which seemed to suit current 49er World Champion NathanOutteridge with crew Iain Jensen just fine.  Only 2 teams were able to post 3 consistent races in thesingle digits and the 2-1-4 posted by the Aussies launched them into firstoverall.

Pietro and Gianfranco Sibello of Italy were the only otherpair to keep them low which moved them into 2nd while the qualifyingleaders of Stevie Morrison and Ben Rhodes and John Pink and Rick Peacockstruggled a bit dropping both into 4th and 3rdrespectively.  Both Pink/Peacockand Morrison/Rhodes won a race each, but they were countered by deeperfinishes.

Racing was delayed while the breeze couldn’t fill andremained in the 8 knot range.  At timesit completely died onshore, but the Race Committee was able to find enough tohold 3 races for the Gold.

The Silver and Bronze fleets each were able to have 1 race apiece although the Bronze fleet had their first race abandoned due to shiftingwinds and completed race 2 in the morning.  The lone Silver race was won by Bernadro Freitas andFrancisco Andrade of Portugal who had broken their mast earlier in theweek.  Peter Burling and Blair Tukeof New Zealand are the current leaders of the Silver fleet.

Eight races are scheduled for the final series with themedal race to take place on Sunday after morning races.

Dave Evans with Simon Hiscocks as crew, are the current leaders of the 49er Worlds after day 1.  Winds of 15-18 slightly increasing in the afternoon provided picture perfect racing.  Full results for the day can be found here 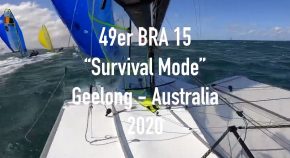 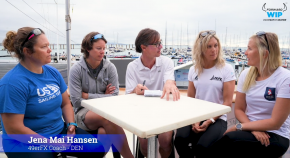 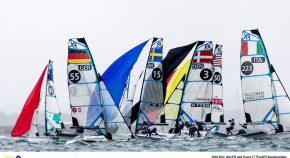