Due to a lack of wind in the morning, the last race for the 49er fleet wasn’t held. The Top 10 sailors have been waiting onshore until 1 pm, when the wind showed up. Then the race committee has manged to run three short theatre style races in winds of 4-6 m/s.

The French team Kevin Fischer and Marc Mallaret had a very good day winning two races, so they moved from fourth to third place. Leading from the beginning, the Spanish team had a big advantage (38 points) over the Austrians Benjamin Bildstein and David Hussl, so their position was very stable. The Spanish passed the finishing line on fourth place twice and on seventh, so they strengthened their position as leaders and won the 49er Youth World Championships.

German team Justus Schmidt and Max Boehme sailed very well today by ending up in the first third in every race, so finally they have finished the regatta placed fourth. Polish Jacek Nowak sailing usually with Tomasz Januszewski, members of the 49er Polish national team and on the 14th place in last ISAF ranking, sailed the Youth Worlds in Gdynia with a very good German skipper Jan Hauke Erichsen, the fifth in ISAF ranking. Unfortunately they’ve finished on 24th place. He explained: “We didn’t have time to train together, we have had only one day of training in the wind of 18 knots, so in very different conditions that we had later.  During the regatta it turned out that we have different sailing technique in light wind and different sharing of duties in the crew.  Also we are heavier than the other crews – we weigh 154 kg and the average weight is 148 kg, so that gives a significant difference at these conditions.  Due to heavy crew we had problems with speeding up after the start, so usually we tried to fix these bad starts with experience and good technique.  But I’m sure in stronger wind we will race only in a few boats fleet.”

In the 49er FX class boats started racing around 3.30 pm, but some minutes after the first race had started the wind eased below 2 m/s and the race was abandoned. So the yesterday’s leaderboard hasnt’t changed and Finnish sailors Noora Ruskola and Camilla Cedercreutz are the 49er FX Youth World Champions.  Noora Ruskola: “The wind was too light today, but pretty much the whole regatta was OK.  Today we had only a half of the race but we were leading anyway.  We didn’t do anything for fun here in Gdynia, we were only focused on sailing.  We are really happy with our result, it couldn’t be better.” 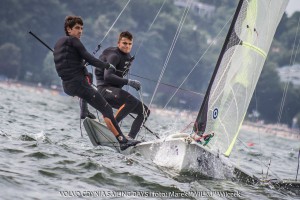 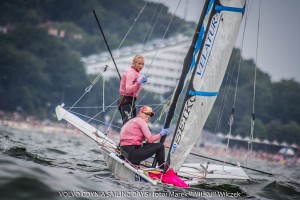 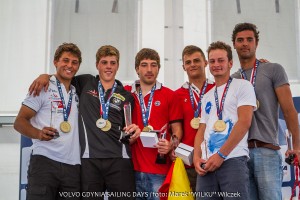 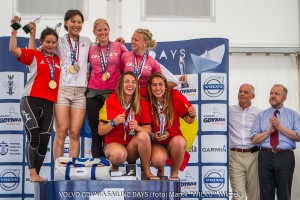