The 2013 Palma World Cup regatta is the real kick off of the Rio quadrennial for Olympic Sailing.  The 10 events are set, Olympians are most back from any post London breaks, and a large fleet has assembled in Palma to place a marker down for the next 4 years.

In the 49er class we have the largest fleet ever to attend the Palma regatta at  76-80 boats.  That’s without a few of the top names who are out on America’s Cup duty.  The fleet will be split into 2 qualifying fleets of up to 40 boats each.  The 49erFX fleet will also be the largest ever assembled in Palma, their first year here, and it will also be the largest fleet ever for the new event.  There are 36 teams registered, so that’s another maximum size skiff fleets.  The race committee will have a very difficult week trying to fit 9 maximum size skiff races in each day.

Speaking of the days, it’s close enough to the week to have a peak at the forecast, thanks windguru. 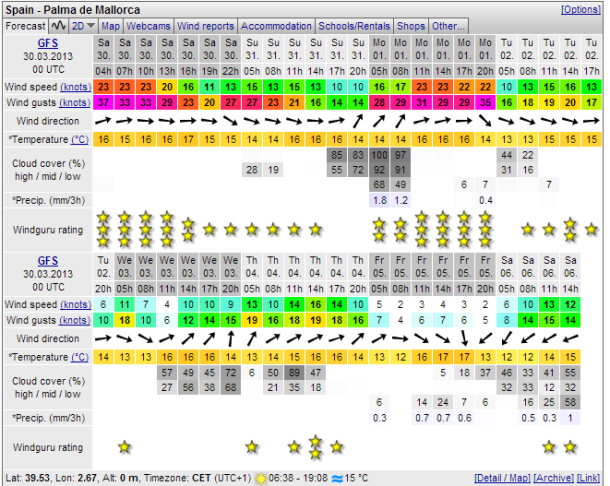 Racing starts Monday, and with forecast gusts into the 30’s it’s hard to say if the fleet will get any racing in.  This forecast is quite typical for Palma at this time of year.  In a week we can expect to see a full range of conditions, from survival to drifter with a few nice days in the teens mixed in.

If the forecast holds, then Tuesdays racing will be critical for the 49er teams trying to qualify.  The seas will be quite lumpy following the big blow that is already on and with puffs into the upper teens, these teams will likely have quite a lot on just to get around the course, let alone race in a fleet of 40 boats.  It will be skiff sailing at it’s best.

The same holds true for the 49erFX sailors.  For almost everyone in the fleet it will be the first time racing skiffs in a large fleet format.  There are many teams with vast amounts of experience in other boats, but learning skiff tactics in large waves and higher wind speeds will be a massive challenge.

Having a look through the fleet lists, it’s hard to say who will emerge from the pack in the 49er to claim this title.  There are a number of experienced teams here as well as some younger teams who have already made early impressions.  First off has got to be the twin Danish threats of Norregard/Thompsen and Warner/Lang.  Both of these medal winning teams have made crew trades recently, but it is hard to see them falling back at all.  The Danish squad will be one to watch for the full 4 years.

In terms of returning Olympians, we also have the Croatian team of Costov/Kupac, now season veterans of the fleet and Frenchmen Dyen/Christidis.  Dyen and Christidis won Palma twice in the past quad and with a windy forecast, these two levers could easily take the title again if they’ve kept their skills up through the winter.  They’ll be pushed hard by three other experience french teams including the 2012 European Champoins Frei/Rocherieux.

Then there is the British squad, 12 teams deep this year.  There is a ton of returning experience in this group and some up and coming teams as well including 2012 Youth World Champions Peters/Fitzgerald.  Any of about 6 of these teams could end up on the podium this week.

There is a strong contingent from the Americas over in Europe this spring, with 3 teams from Brazil, Argentina, and the USA respectively.  These teams have had the benefit of already getting a few regattas under their belts this year and includes both the 2013 North American Champions and the 2013 Miami World Cup winners.

The 49erFX fleet is wide open at the beginning of the quad.  There are large teams from Sweden, the UK, Denmark, and Germany.  There is also the Brazilian Martine Grael and Kahena Kunze who have won both of the events so far in 2013 in much smaller fleets.  Most of the teams are treating this event as just more practice, as they are all so new to the boat.  It will still be interesting to see where the various squads and teams are so far in their development.

The finish of the week will be another test of Theatre Style racing for the 49ers.  A normal, low point scoring system, will be used to close the regatta in what should spectacular fashion.  Few of these teams have seen the Theatre Style yet in person so it will be another learning experience for the sailors and race organizers.