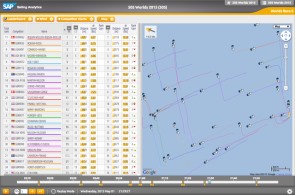 Understanding the Format for the 2013 World Championships

The 2013 SEIKO 49er and 49erFX World Championships will consist of 6 racing days, Sept 24-29.  The first 3 days are for qualifying, the next 2 days are the semi finals, and Sept 29 is the Finals.  This post is to discuss the details of each part of the regatta.  These sailors will be pushed to perform well on a daily basis right the way through the regatta and worthy champions will emerge.

For the 49erFX, qualifying is standard for Olympic sailing.  The roughly 52 boats will be split into 2 even quality fleets and sail 3 races per day for 3 days.  Once the fleets have sailed 5 races a drop race will come into effect.

The 100 boat strong 49er fleet will also sail for 3 days of qualifying only they will use a 2 stage qualifying process.  The first 2 days are as normal, just like the 49erFX.  On day 3 of qualifying, assuming 5 races have been completed, only the top 40 boats will have a chance to move into gold fleet.  The top 40 boats will be divided into 2 equally skilled groups, and each group will race for 4 races.   The other 60 boats will be split into 2 equal quality fleets and race off for 3 races to try and make the Silver fleet.

In both cases, the first 20 will advance to the Gold fleet.  In 49er, an additional fleet of those teams who didn’t make gold is created called the repechage.  Of the bottom group of 49er sailors, the top half will make the Silver fleet and the rest will make up the bronze fleet.  For the 49erFX, those who don’t make gold will race in the Silver fleet.

This set up is meant to try and ensure the top 20 49er teams make it through to gold fleet by having the top sailors race against each other as much as possible.  On days 1 and 2, there will be 3 fleets of 33 boats each, and it’s difficult to make sure the top boats are racing in similar conditions and with similar strengths of fleets.

Our live broadcasts in both Enligh and French will begin on this day on 49er.org and 49er.org/fr/ and will carry through the final 3 days.

The top 20 boats for both the 49er and 49erFX will each race 4 races of only 20 minutes.  This intense racing is a test for a possible format request by the class for the 2016 Olympics as a shift from our typical 30 minute long races.  8 races over the 2 days are scheduled with 1 drop being allowed after 5 races.  Teams bring with them their points after qualifying, so by the end of the Semi Finals the teams will have raced up to 17 races with 1 drop from qualifying and 1 drop from the Semi Finals.

The rest of the fleets will continue to race, of course.  Unlike most regattas, however, they will also have the chance to move up in their fleets.  The top placed teams at the end of days 4 and 5 in each fleet will get to advance to the fleet above them.

The Repechage in 49er will also race 4 races of 20 minutes each.  The Silver fleets in both 49er and 49erFX along with the Bronze fleet in 49er will race 3 races each day of 30 minutes.  Again, drop races will come into effect after 5 races.

The finals races will be done in the ‘Theatre Style’, meaning that the course will be bounded on both sides using a lane rope so that teams can not sail to the corner of the race course.  This is similar to the boundaries we have seen in the 34th America’s Cup except they are physical boundaries, not virtual.  Teams carry all of their points forward from the Semi Finals into the Petit Final and Finals so that by the end of the regatta teams may have sailed as many as 20 races.

At 12:00 pm the 49erFX Petit final will occur.  The teams placed 10th – 21st in the gold fleet plus the top team from the Silver Fleet will race 2 races in the theatre.  Each race will last 10-12 minutes and is worth double points.  No drop races are allowed.

At 1:00 pm the 49er fleet will do the same.   The teams placed 10th – 21st in the gold fleet plus the top team from the Repechage will race 2 races in the theatre.  Each race will last 10-12 minutes and is worth double points.  No drop races are allowed.

Each of the winners from the Petit finals will advance to the Finals.

At 2:00 pm will be the Final of the 49erFX.  The teams placed 1st – 9th in the gold fleet plus the top team from the Petit Final will race 3 races in the theatre.  Each race will last 10-12 minutes and is worth double points.  No drop races are allowed.

At 3:00 pm will be the Final of the 49er.  The teams placed 1st – 9th in the gold fleet plus the top team from the Petit Final will race 3 races in the theatre.  Each race will last 10-12 minutes and is worth double points.  No drop races are allowed.

All of the other fleets will also race on the morning of the 29th.

Please join us online or in Marseille to enjoy this fantastic racing, where the best of today’s modern sailors race in One Design skiffs!

Spain take both Skiff Titles in Windy Warm Up

Challengers for the Crown Stepping Up