Link to the live Tracking and replays

Link to the live tracking and replays

New Zealand dominated the Seiko 49er & 49erFX World Championships in Marseille with a dazzling display of confidence and maturity by three young teams all in their early 20s.

First up was the 10-boat, three-race short-course final for the FX women, and Alex Maloney and Molly Meech hammered home their points advantage with a straightforward victory. Behind them was a much tighter battle for silver and bronze that wasn’t settled until the final few seconds of the final race. Brazil’s Martine Grael and Kahena Kunze clinched silver by less than a boatlength from France’s Sarah Steyaert and Julie Bossard.

Immediately afterwards the men raced their three 10-minute heats, and when Peter Burling and Blair Tuke won the first race by a big margin, it looked unlikely any other crew would threaten them for gold. However, they had a poor second heat with a 9th place finish, while their younger team mates Marcus Hansen and Josh Porebski won the race, moving to just 10 points behind the Olympic silver medallists. If they could get four boats between them in the final heat the world title would go to NZL-6 rather than NZL-2, but in the end Burling and Tuke did enough to win the Worlds by 12 points.

Burling and Tuke have won silver at the past two 49er World Championships, plus Olympic silver, and now the gold. “Great to take the win,” said Burling, who also won the Red Bull Youth America’s Cup a month earlier in San Francisco. “Good to give the NZ yachting community a bit to cheer about after what happened with the Cup earlier in the week. For us, we were feeling for them, we know them well, but it was good to just get on with our own little thing and get it on.”

Alex Maloney and Molly Meech capped off a successful first season in the new women’s Olympic skiff with an impressive win in Marseille. “Pretty awesome, especially with the guys winning too,” said Meech, who was also mindful of the tough time for her compatriots in San Francisco. “I think Dean Barker did an amazing performance, and we’re all proud of what Emirates Team New Zealand achieved. But hopefully today’s win will put a smile on a few people’s places. We’ve put a whole lot of hard work into this year, and it’s all paid off. But this is all just one stepping stone to Rio 2016, and it will get harder over the next few years.”

While Kiwi gold was virtually assured going into the final double-points race, the battle for silver and bronze was a tight five-way battle between Germany, Great Britain, Italy, France and Brazil. It was close all the way to the finish, with the Dutch winning the race, but crucially for the Brazilians, a second place just enough to secure silver ahead of the French who took bronze. Martine Grael and Kahena Kunze were delighted to win silver, the same colour they won at the Europeans in Denmark two months earlier. “It was great,” said Grael. “Early this morning Kahena had all her belongings stolen from the hotel. She was very, very mad! But I think it helped. We’ll go to the police to report it, but first we celebrate!”

Marseille is the training base for France’s strong 49er and FX squads, and the cheers were loud across the bay as the home team won bronze in both fleets. Manu Dyen has taken most of the last year off since the Olympics, becoming a father for the first time. But today he and crew Stephane Christidis scored their first ever Worlds medal.

Even more impressive was a bronze for Sarah Steyaert and Julie Bossard who only started sailing the 49er FX less than three months earlier. “When we found out we had won the bronze medal, it went crazy. We’re really happy because we have only sailed together since July. We still have a lot of room for improvement. This bodes well for the future.”

Nathan Outteridge and Iain Jensen relinquished their world crown after winning four of the last five 49er World Championships. They had a shocking start in the first race today, but kept on chipping away and finished 5th overall. Bearing in mind they haven’t raced since winning gold at last year’s Olympics, the opposition know that the Australians remain one of the hot favourites for Rio 2016.

Just ahead in 4th place were Dylan Fletcher and Alain Sign who had led for much of the week but suffered in the strong winds of Saturday. The British team still had their sights set on a medal today, but missed out to the French by 3 points. “Pretty hard to take,” said Alain Sign. “We’ve been working all season for this moment. We’ve been sailing well all week, starting and speed is good, but it’s such a fine line in this fleet, and dropping the mainsheet out of a tack in the first race was the difference that cost us a medal. That mistake probably took us from being first or second around the top mark, to being last. We thought we would get across the French boat that won bronze but we had to do a penalty turn. He took a bit of an aim at us, but that’s going to happen in this racing where it’s all about inches.”

No nation is nailing the Olympic skiff like New Zealand right now. Blair Tuke was savouring the moment. “Pete and I haven’t won a world champs since our junior days and to do it here in the 49er, and to have our Kiwi training partners in 2nd place is a dream come true. And to have the girls win the first FX World Championships – a good day for Kiwi yachting.” 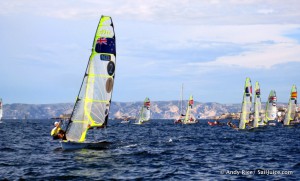 This tab is both the official and unofficial notice board for the 2013 SEIKO 49er & 49erFX World Championships in Marseille, France.  Racing days are 24-29 Sept, 2013.  Below you can find a number of race documents and aids for the sailors. Registration for Sailors Registration for Coaches List of Teams Registered Both 49er and 49erFX are open, so anyone can sail either boat. Important : DO NOT LET ANY VALUABLE STUF IN YOUR CAR DURING YOUR STAY AT MARSEILLE (visible or in the back of your car) WHEN YOU ARE PARK OUTSIDE THE VENUE -Even if you are doing a five minutes shopping-

Add this event to your calendar with a click!

For fans who want to watch sailing live in Marseille there will be live racing to view each day from Sept 24-29.  The championship course will be visible from shore.  Fans are also invited inside the venue to see the boats and sailors up close.  Join our audience each evening for the 6:00 pm evening show.

GPS – There will be GPS tracking of the championship course each day.  2 of the 6 fleets daily will carry gps transmitters so fans can watch racing virtually each day on 49er.org Daily Highlights – Each night there will be a daily video highlight package. Livestream Video – We will live broadcast the racing Sept 27-29, the semi finals and finals.  Each day on 49er.org we will have live action from the championship course in both English and French. Morning and Evening Shows – We will come to you live at 9:20 am and 6:00 pm each day to review the happenings from the regatta.  Join us as we discuss the event with our top sailors.  Check out 49er.org and subscribe to our youtube page for the best in video.

The marina is in a U-shape, with ramps leading into the water on all sides with rough dimensions of 200m by 100m and then a serpentine breakwall to get to the sea.  There is room for as many boats as will attend and the entire area is surrounded by a high metal fence for security.  There are parking and trailer/camper facilities inside the venue.

Here is how you will be able to launch.

There are buildings, showers, toilets, wifi, tie downs anchors, hoses, and many more facilities for sailors in the venue.

There is a huge bay for up to 6 racecourses.  The shipping traffic goes on the other side of the Islands, so will not be a problem.  If we decide to do a long distance race, there are many interesting geographical features to use in the course.

Above, you can see the Marseille center is around the corner from where we are racing.  All the ferries along with other commercial vessels go outside the bank of islands that separate the two bays.  It’s about a 20 minute drive to the town center from the regatta venue. Below, see in greater detail where we will be racing from and where the host club is.  The host club has a beautiful bar and deck, so will be a great place for us to take VIP’s and sponsors after the days racing.

Almost the entire harbour is bordered by beaches from our boat park all the way to the host club.  On nice weekends, there can be 50,000 locals who come to the beach to hang out.

3 options are circled for the Theatre Style Racecourse areas.  Each of them is fine as for the three wind directions, though obviously we’re hoping it’s not offshore. What differentiates the three options is how many people they could accomodate to watch. A) is best viewed from a wide public walkway on the side of a busy street.  It’s elevated, so would be a fantastic view of the racing for any spectotors we can attract.  It could probably fit 500-1000 spectators. B) is right outside the breakwall from the the boat park.  Spectators can sit on a grassy hill with (hopefully) a big screen TV and watch the racing live.  This would be a very convenient and modest way to have our finals.  It would be easy to set up a spectator area and have the medal ceremony with the crowd after the finals, boats could even sail straight to the beach after racing as it’s only a short haul to our boat park.  This area could probably accomodate about 3000 fans/visitors comfortably. C) This is a very large area.  The T breakwall that justs out into the bay is about 100 wide and 300m long.  If we can secure big sponsors who want to put up grandstands and make a huge event of this, the location is very good.  Otherwise it will be too big for us to fill.  This area could probably accomodate about 20,000 people to watch. Below is the breakwall for area C

And the view the spectators would have looking at the water.

Here is a link to the club’s accommodation recommendations.  There are a number of hotels, apartments for rent in the suburb.  Only a 5 minute walk from the venue is one complex with a hotel that would be perfect for sailors.  That hotel has weekly rates that are quite good and 2, 3, 4, 5, and 6 person room options. In between the accomodation area and the sailing venue are about 20 restaurants with food from all over the world.  This should be a really nice socializing area for all sailors in the evenings, as it’s based around a pedestrian walkway.

The host club, Yachting Club De La Pointe Rouge, has a wonderful restaurant, bar and patio.  For any sailors planning on bringing their sponsors to the event, there will be a great venue for looking after them.  Here are some pictures of the facilities.