Sarah Steyaert and Julie Bossard sailed a stunning third day of qualification, winning both of today’s heats and moving to the top of the women’s leaderboard at the Seiko 49er & 49erFX World Championships in Marseille. The former Laser Radial World Champion from La Rochelle moved to Marseille three months ago and the local knowledge showed today. Where most of the 53 teams could make little sense or pattern of the extreme light airs on the Mediterranean, somehow the French team found a consistency that no other crew came close to matching.

“Starting was really important,” said Steyaert. “We did not do good starts the last two days, and it’s important because it can be very ‘go left’ in these conditions. But today we thought the pressure was everywhere so we started close to the committee boat. We sailed well tactically, and we weren’t so fast but we handled the waves OK, which are quite different from most places.”

Olivia Price, Australia’s match racing silver medallist from last year’s Olympic Games, put in a good day with crew Caitlin Elks. “We didn’t really get off the start line that well but we found some clear air and could start sailing our own race,” said Price. “We picked up a few boats on the downwind, went round the starboard mark rather than most people going round the port mark.” Their alternative downwind strategy served them well, and the GPS tracking revealed they had spent the least time sailing downwind, making the Aussies the Queens of the Downwind for the day.

Despite a good day, Price saw little rhyme or reason to the conditions. “It was very hard to see the wind on the water, you have to feel it on the boat and look at the boats round you.” Price uses a sixth sense that she finds hard to explain, when ‘feeling’ the breeze. “If the boat doesn’t want to accelerate you’re not sailing in pressure. And you can’t wait for the wind to come to you, you have to find it yourself.”

Anika Lorenz agreed with Price’s assessment. Although she and her helm Victoria Jurczok had to hand on the Seiko yellow jerseys to the French team now leading the series, the Germans had a good day even if they found the conditions very challenging. “Our first race was 7th and then a 5th,” said Lorenz. “We had a problem with being late on the start, and had to catch some boats during the races. We couldn’t start, but we could come from behind. We just look for pressure and try to catch it – there was no real strategy that worked all the time.”

While Jurczok and Lorenz are starring in the FX, other members of the German squad are appearing to great critical acclaim in a 2013 update of iconic TV show Baywatch, currently airing on 49er.org  (http://49er.org/blog/2013/09/26/redo-of-baywatch-by-the-german-49er-sailors). If the sailing career doesn’t work out, Germany’s 49er gods and goddesses have a bright future in the showbiz and glamour modelling industries.

With 28 nations represented in Marseille, there are race winners from around the world, with the Japanese FX women Chika Hatae and Noriko Okuma emulating their male compatriots’ victory from yesterday with their own race win today.

The women now divide into Gold and Silver fleets, while the 97-boat men’s 49er fleet moves through to the next stage. Today was a frustrating outing for the top 40 men who were divided into two groups of 20. Despite starting a race in very light airs, the breeze dropped too light to complete a heat for either group.

It was a missed opportunity for some teams in the 20s to climb up into the top 20 for Friday’s Semi-Final. The Lübeck brothers from Denmark remain in 21st overall, tantalisingly close to moving up the standings. “A bit disappointing,” said helmsman Mads, “but we couldn’t do anything about it. We kind of missed the opportunity because we messed up the start, but of course now it doesn’t count anyway. We just have to be prepared for tomorrow and stay in 21st place. Our goal is to hold that position, win the second fleet, and get back into the gold fleet on the day after.”

A place behind in 22nd, Philipp Müller and Kilian Holzapfel were also sad to miss a chance to move up to gold fleet, although the German team has already exceeded its expectations for this regatta. “We were hoping for the top 40, so anything else is a bonus for us,” said Müller. “We are happy.”

British team Dylan Fletcher and Alain Sign remain top of the standings and will wear the Seiko yellow jerseys going into the Semi-Finals, which will be live streamed on 49er.org from 11am local time on Friday. To learn more about the race format at the 49er Worlds, take a look here… 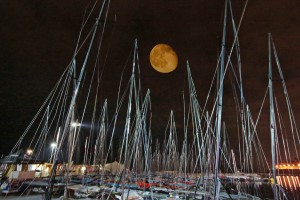