This is a dream scenario for the Brazil sailing regatta, as the final race will seethe first daughter of Olympic sailing, Martine Grael with Kahena Kunze, fight for Olympic glory on the water she grew up on.  The daughter of Brazilian Olympic hero Torben Grael, Martine has been in almost every podium fight since 2014, won the 2014 World Championship along with the World Sailor of the Year award, and now seek to cap the four year campaign with a Gold.  Their World Championship victory came in a who beats who medal race, so this is familiar territory.

Martine and Kahena grew up sailing against each other, but since setting foot in a skiff together four years ago have been a wonderful team, generous with their passion and ambition.  Their contagious smiles and boundless energy will be necessary to ward off three other top contenders who have all persevered and been tested over the past four years, and who also have had major triumphs.

Early estimates expect over 100,000 Brazilian Olympic fans will descend upon Flamengo Beach to cheer on Grael/Kunze it what should be the largest ever live audience for a sailing race.  Officials claim there is room for over 1 Million fans to watch on Thursday August 18th at 1300.

Moving chronologically backward in time the most recent champions to contend with are Denmark Jena Hansen and Katja Iversen.  The duo won the 2016 European Championship in Barcelona in a final race showdown and have emerged from the strongest squad around the globe to be the Danish Olympic representatives.  Jena and Katja are very consistent sailors and Katja is a real powerhouse at the front of the boat, pushing forward all the time.  They had to beat out another European Champion, Ida Nielsen and Marie Olsen, along with a World Championship Silver medalist team, the Schutt sisters, just to earn the nomination from Denmark.  Fighting and working together with such strong team mates has severely tested the mental strength of this duo who will now be hoping they can rise to the occasion one more time.

Only two months before the Danes won their European titles, the Spanish pair won the 2016 World Championship, in Clearwater, Florida, USA.  Tamara Echegoyen with Berta Betanzos (ESP) sailed a fantastic series and stayed mentally disciplined during a crazy medal race where the winds turned inside out to claim their first victory in the 49erFX.  Neither are short of victories in their careers, however, as Tamara Echegoyen won the Olympic Gold medal in Women’s Match Racing at the 2012 London Olympics while Berta Betanzos previously won a 470 World Championship.  They started racing together once the women’s skiff was introduced and have continuously improved to become contenders over the past season.

Looking all the way back to 2013 is were we pull our final contenders from, as Alex Maloney and Molly Meech (NZL) won the first ever 49erFX World Championship in Marseille, France.  In early regattas Alex and Molly were legs ahead of many of the other teams using their top boat handling and athleticism to dominate the first year of women’s skiff racing.  It was always expected that the rest of the fleet would catch up, but what couldn’t have been expected was just how many teams have become contenders since those early days.

Alex and Molly have worked hard to round out their skillset, but faced challenges when changing coaches mid way through the quad and suffering through a number of poor results by their lofty standards over the past year.  In recent months, however, they have stood tall and regained a footing among the best, and with a win in the medal race can book end this quadrennial with championship wins as big as their huge smiles.  On a side note, they can take inspiration from Molly’s brother Sam Meech who won a Bronze medal here in Rio in the laser class.

The setting for the medal race puts all four of these teams level, with three of them on 46 points while the Kiwis are one point back on 47 points.  The extra point is immaterial going forward since the scores are doubled in the medal race so it will have no bearing on the final result.

The ‘Sugar Loaf’ coarse in the mouth of Guanabara Bay will provide an iconic backdrop to this final race.  More critical than the imagery, will be the effect this min-mountain has on the race itself, as the winds are notoriously fickle on this race area, one moment going clockwise around the peak and the next moment counter-clockwise.  Early leads can evaporate in a moment, and these four teams will all need to fight the whole way around the race to rise to glory.

The biggest shame of the situation is that one of these four worthy teams will have to settle for fourth, often called the worst result in the Olympic games.  That’s the way with sport, for every champion there is the team beaten.  The drama on Thursday will be compelling as it plays out.

Sign up to the 49er newsletter to get email updates and make sure you either come down to watch the race if you are in Rio or tune in to watch the live coverage.  Links, details and photos are available on the 49er event page. 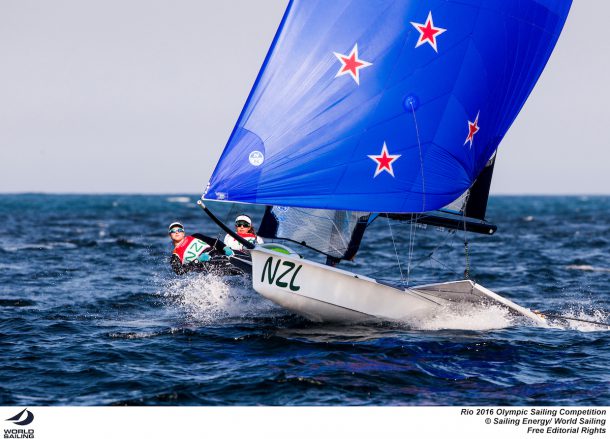 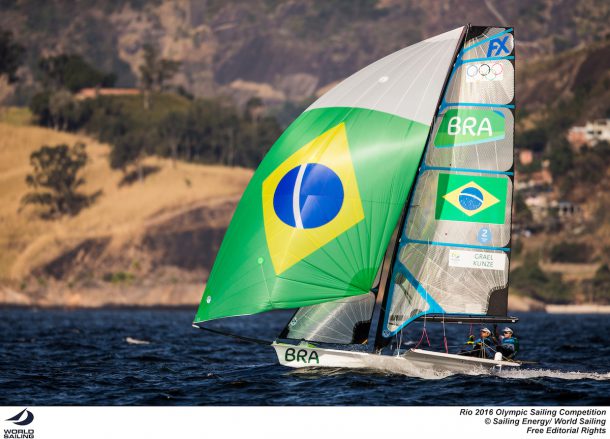 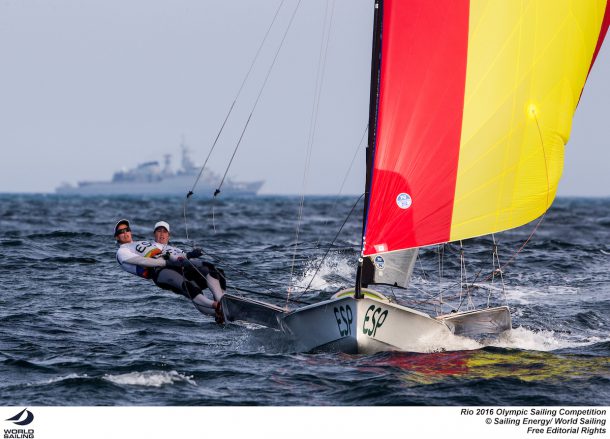 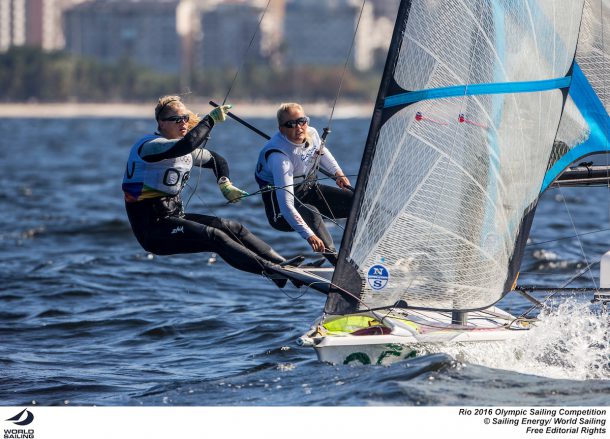 How to Watch the Sailing in Rio