The day was a milestone for the 49erFX fleet, as it marks the largest ever single race to date with 35 boats on a single start line.  The build up to racing was really nice for these womens teams as the day started with 10 knots of breeze and then gradually rose to become very challenging by the end of the day.

Some teams were consistent, others faltered at various times in the day, but everyone had smiles when back on shore.

The size of the fleet delivered some racing surprises for the teams.  In the first race, both the first windward mark and the first leeward gates were an eye opener for how fast and responsive teams need to be with so many other boats competing for wind, lanes, and space.

As the wind grew throughout the day the top mark became a challenge.  Germanys Vicky Jerczok, called it “a cemetery out there.“  With the teams daggerboards representing the tombstones and so many boats upside down it´s easy to imagine what she´s talking about.  It was challenge for all the team.

Team GBR´s Kate Macgregor said, “We navigated around a number of overturned boats on the first part of the run and then took down the spinnaker to gybe.  I was really surprised at that point, as we´d been able to move up to third by having a good bear away and set.  Then we capsized ourselves and join the rest of the swimmers.“

There was general trepidation about how difficult the start line would be to navigate, but with only a single general recall everything went well.  Credit goes to the very experienced 49er PRO, Lukey, for delivering on the day.

Racing continues tomorrow with the final day of qualifying before teams head into the gold fleet.  Results are available and there are a number of great photos of the racing that will be added. 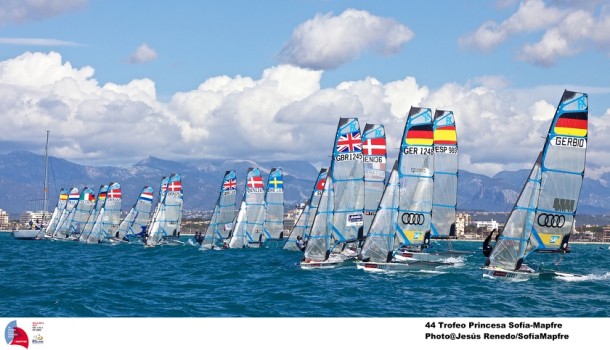