A hazy day greeted the fleet for the start of the Youth Challenge.  The â€˜Auraâ€™ wind came in like clockwork for 1:00 pm and racing started soon after in the 30 strong fleet. 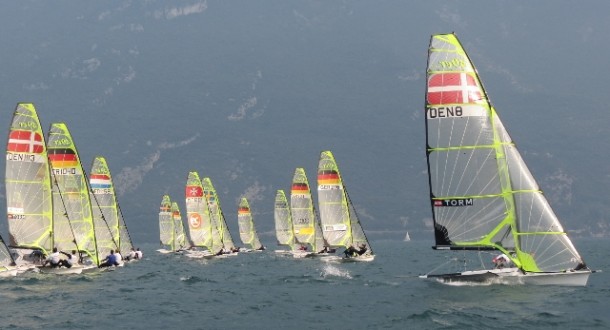 In a daring move, the Swedes cross the fleet on port and head to the favored right side with a good lead.

By the first mark, however, the team of  Johnathan Bay and Nicolai Thorsne of Denmark got the layline right and won out with others overstanding.  Coming into the first bottom marks, they took the s the go right gate on a gybe drop in first place as well.  The Aussies were neck and neck but capsize into the go left gateâ€¦

The Danes held on on for a comfortable win with Germans in second and Spanish in 3rd.

Said Johnathan Bay,  â€œWith plenty of swimming going on, the obvious key was to keep the mast upright.  After that, at good start and tidy laylines were the key to our victory.

In race 2, quite a few more boats got off the line and the fleet as a whole was more aggressive in getting to the right hand cliffs.  With the breeze down a couple knots, yet with a 3 lap course meant that boathandling and physical conditioning were sure to come to play.  The Germans and Spanish were leading again with the Dutchies in third at the leeward gates.

Jan Erichsen of the winning German boat credited their good speed and safe boathandling for the win.  They were neck and neck with the Danes up the first beat but a better layline had them in the lead.  The Danes, on the other hand put it in the drink twice during the race and were sure not to repeat their first race performance.

The Ausses finished a solid second but were too busy fixing up their vang system to get a full debrief of their race.  In third were the Dutch, Remy Oomans and Bart deHaas, who credited being really big and fast for their good race.

The Spanish fell back to 4th on the last beat and have been consistently competitive on this first day of racing. 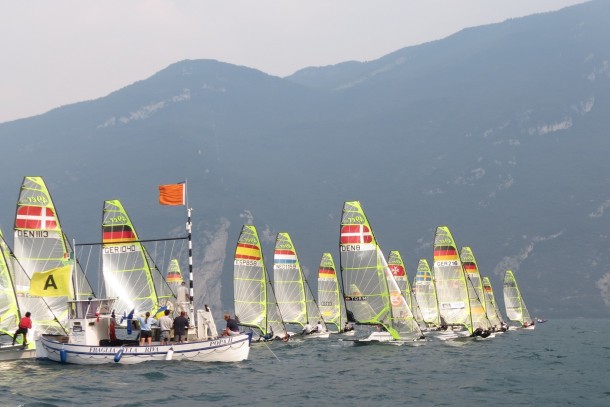 The final race of the day was a titanic battle between the Danes and Germansâ€¦. They were neck and neck through all three lapsâ€¦  On the final hoist the Germans did a gybe first set while the Danes did a regular gybesetâ€¦ heading into the cliff face the Danes were a boat length low and behind.  The two gybed simultaneously and eventually the Germans held out to claim the victory and secure their placing of first overall.

It was a gutsy effort for many teams out there.  The day saw many capsizes and much determination to sail the day through, no more so than from SWE 1184.  From Sweden, Hannah and her crew Casper are to be commended for their efforts through the full day.

2 more days of racing are scheduled for Sept 6 and 7.