Present position – The 49er has traditionally raced major events including the Sailing World Cup events in small fleets of 25 to 35 boats with only one fleet of boats on the race course at the same time. With the introduction of the Womenâ€™s Skiff, Event Organisers, for space and cost reasons, will be looking to race the Menâ€™s and Womenâ€™s Skiffs on the same race course with multiple fleets, in a similar way to the 470s and Lasers. It is unlikely that Event Organisers at multi class events will be willing to set two race courses for Skiffs so we must adapt our courses to cope with this problem.

The main 49er events such as the World and Continental championships will remain unchanged with windward / leeward courses and smaller fleets  as in the past.

The Proposal – The proposal is to race 49ers either on a trapezoid course using the outer and inner loop courses or on a windward / leeward course with the men starting first on a slightly longer leg than the women.

On the trapezoid course the first important decision to be made is what internal angle to set at Mark 1. Because the reaching angle of a 49er varies so much with wind strength it would not be possible to vary the reaching angle. The 470s use an internal angle at Mark 1 of 60 degrees and Lasers 70 degrees. We need to  experiment with an internal angle of between 50 and 80 degrees but I think we could consider uniformity and going for 60 degrees as with 470s. Whether to set a gennaker or not will become a new skill. Another consideration is the finishing line which for other dinghies on the outer and inner loops is a reaching finish from the gate at Mark 3. I would propose the angle of this reach, from the Mark 3 gate to the finishing line to be the same as for the reaching angle from Mark 1 to Mark 2. The final reach from Mark 3 to the finish is normally set at 300 metres. At the end of each race the boats would sail the short distance from the finishing area back to the starting area to start the next race. Turn-around times between races would still be kept to a minimum time but with two fleets there will inevitably be some delays.

Consideration in proposing this course must be given to the lay lines from the start line (starboard tack boats) against the downwind boats (port gybe boats) from Mark 2 and the lay lines from the Mark 3 gate (port tack boats) against the downwind boats (starboard gybe boats) going to Mark 4 gate to make sure there is a minimal amount of crossing as these boats sail upwind and downwind. The distance of the reach from Mark 1 to Mark 2 can be adjusted but is normally set at two thirds the distance of the windward leg.

On the double windward mark course it should be possible to start the Men first followed by the Women, the important thing will be to avoid the different 49ers going through the leeward gate at the same time. Once again delays in starting the two fleets will be inevitable.

Target times would remain at 30 minutes.

We must try to be an easy Class to deal with for ISAF and Event organisers and avoid having courses that are difficult to resource and operate.

Race Committee resources – extra resource in the form of extra mark boats, either one or two boats, plus a finishing boat will be required on the trapezoid course with the necessary extra personnel. 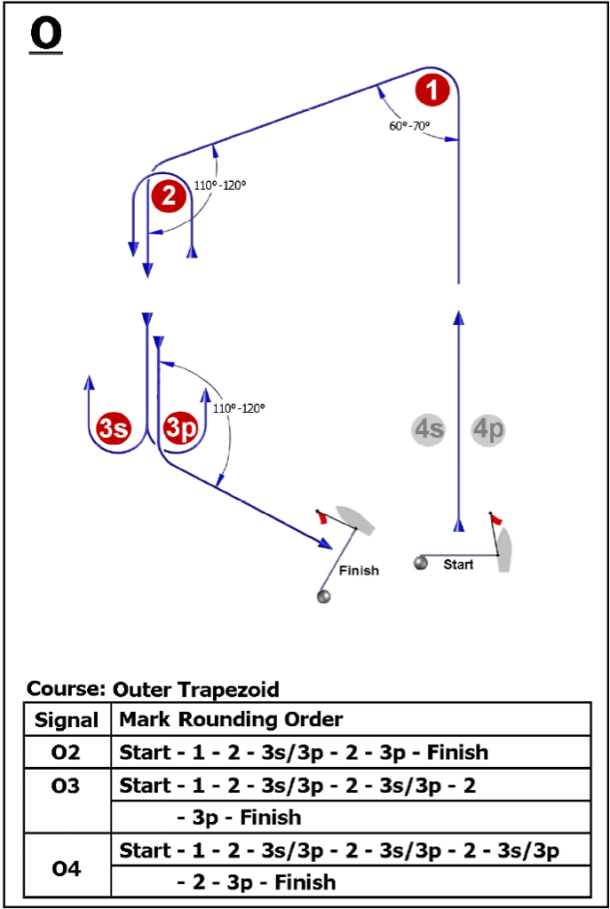